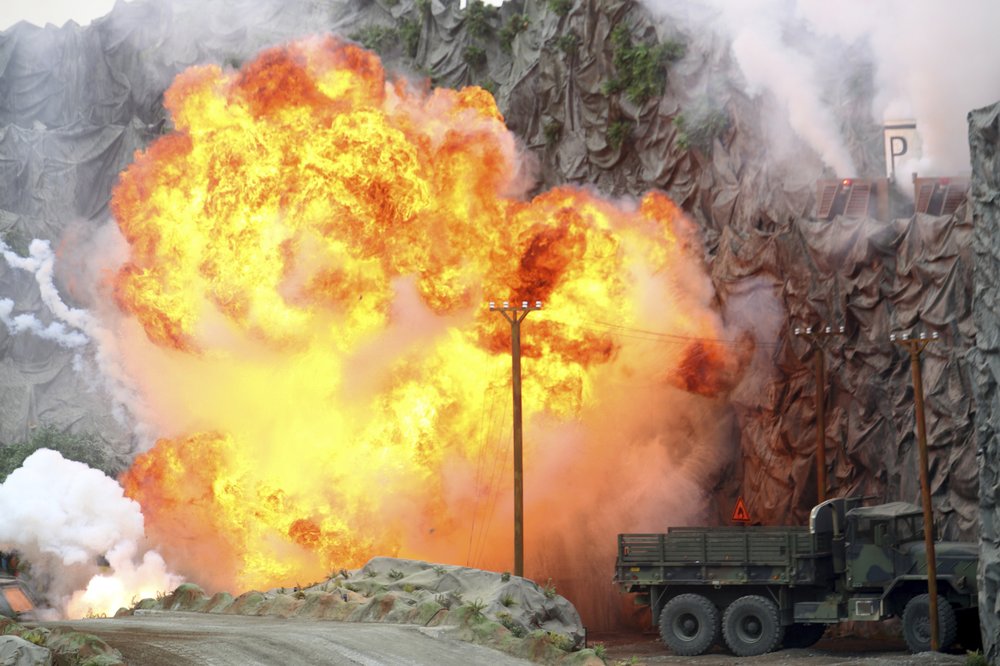 An explosion strikes during a military demonstration targeting a theatrical "ballistic missile launchpad" at the International Defense Exhibition and Conference in Abu Dhabi, United Arab Emirates, Sunday, Feb. 17, 2019. The biennial arms show in Abu Dhabi comes as the United Arab Emirates faces increasing criticism for its role in the yearlong war in Yemen. (Photo: AP)

The United Arab Emirates’ yearslong war in Yemen alongside Saudi Arabia bled into the start of a biennial Abu Dhabi arms fair Sunday, which saw the Emirates sign $1.3 billion in weapons deals.

One manufacturer displayed a model of a machine gun on sale that’s now in the hands of Emirati-backed militiamen in Yemen, while the armored personnel carriers and tanks used in the war in the Arab world’s poorest country also could be seen at the show. Even the military show that began the fair included troops raiding a militant hideout equipped with both mobile and land-based ballistic missiles, just like those in the possession of Yemen’s Houthi rebels.

While Emirati officials avoided discussing Yemen, allied American officials linked arms smuggling there to what they described as the wider malign activities of Iran across the greater Middle East.

“My assumption is there are still things going into Yemen that I need to stop. . There is nothing good happening by arms being illegally shipped into Yemen,” said Vice Adm. James Malloy, the head of the U.S. Navy’s 5th Fleet command that oversees the region. “It is destabilizing. It delays peace there. It exacerbates the disastrous humanitarian crisis that we’re facing in Yemen and delays humanitarian efforts coming in.”

Discussing the Houthis, Malloy added: “We see the world trying to end this thing and one group doing nothing to end it — probably the opposite.”

The UAE entered Yemen’s war in March 2015 alongside Saudi Arabia to back Yemen’s internationally recognized government, which the Houthis had pushed out of the capital, Sanaa. The Emirates largely has handled ground operations in the conflict while the Saudis have bombed from the air.

The war has pushed Yemen to the brink of famine and killed more than 60,000 people since 2016, according to the U.S.-based Armed Conflict Location & Event Data Project, or ACLED, which tracks the conflict.

Atrocities have been common in the war.

The U.S. had backed the Saudi-led coalition with midair refueling and targeting information. American lawmakers, angered by the Oct. 2 assassination and dismemberment of Washington Post columnist Jamal Khashoggi at the Saudi Consulate in Istanbul, have been pushing to withdraw U.S. support.

The Houthis also have fired over 150 ballistic missiles into Saudi Arabia, some even reaching as far as its capital, Riyadh. The West, United Nations experts and the Saudi-led coalition say Iran has helped supply the Shiite rebels with the missiles, something Iran denies.

That preoccupation with ballistic missiles fueled the opening ceremony of the International Defense Exhibition and Conference. The unnamed militia threatened to launch ballistic missiles, leading to an all-out assault by troops in armored vehicles, tanks, helicopters and jets. The demonstration’s climax saw a fake ballistic missile slowly emerge from an underground silo, only to be destroyed by an airstrike.

That worry also saw the Emirates sign a $355-million deal Sunday with Raytheon Co. of Waltham, Massachusetts, for surface-to-air Patriot missiles to protect against such launches.

Drones and other weaponry have been recovered from the Houthis and appear to be Iranian, experts say. Meanwhile, Western-made arms like those on display Sunday have ended up in the hands of militiamen in Yemen.

Rights group Amnesty International criticized Belgium’s FN Herstal for displaying its 5.56 mm Minimi machine gun at the arms fair as it has been seen in the hands of Emirati-aligned militiamen. FN Herstal officials at the fair declined to comment.

The military buildup in the Emirates and elsewhere in the region has come amid concerns about Iran’s influence after the 2015 nuclear deal it struck with world powers. While Iran continues to abide by its promise to limit its enrichment of uranium, the U.S. under President Donald Trump has pulled out of the accord.

Malloy, the head of the Bahrain-based 5th Fleet, didn’t hesitate to describe Iran’s actions in the region as “destabilizing,” citing its renewed threats about cutting off the Strait of Hormuz, the narrow mouth of the Persian Gulf through which a third of all oil traded by sea passes.

“The activities and the exercises that they engage in are inherently offensive in nature,” the vice admiral said.

Iran, however, didn’t represent the only ongoing geopolitical challenge seen at the arms fair. Sudan’s President Omar al-Bashir, who often attends the arms fair, was a no-show amid the ongoing protests challenging his rule though his country displayed some of its weapons for sale. Bangladesh Prime Minsiter Sheikh Hasina attended the fair’s opening ceremony, as did Guinea’s prime minister and Chechen regional leader Ramzan Kadyrov.

Meanwhile, China displayed weapons for sale ranging from missile launchers to drones. Already, China has sold armed drones to Iraq, the United Arab Emirates and Saudi Arabia. The Emiratis in particularly had wanted American-made armed drones, but the Obama administration opposed the sales over the Missile Technology Control Regime, a 30-year-old agreement that aims to limit the spread of missile technology. Under Trump, the U.S. has permitted U.S. manufacturers to directly market and sell drones, including armed versions. The government still must approve and license the sales.

“We do understand that it’s a very competitive world out there and we want to ensure that we’re doing everything in our power to provide us systems the best in the world to our partners,” Hooper said.