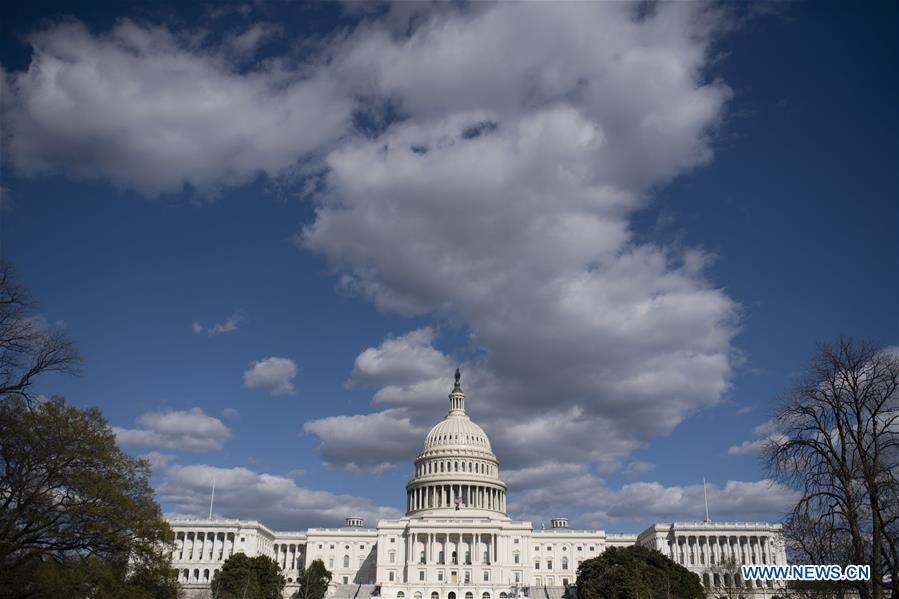 Photo taken on April 2, 2020 shows the U.S. Capitol building in Washington D.C., the United States. The United States on Wednesday became the first nation with more than 200,000 COVID-19 infections, according to a new tally from Johns Hopkins University. (Photo: Xinhua)

Editor’s Note: On Wednesday, the number of US coronavirus cases skyrocketed past 200,000, fueling public anxiety over the disease’s spread in the US and prompting more people to question the US government’s coronavirus response.

The Brookings Institution, one of Washington's most prestigious think tanks, released a report on the official actions taken by the US government in response to the coronavirus outbreak on Tuesday, outlining four phases of crisis response and highlighting some of its most important apparent failures.

The US government’s response saw massive failures of judgment and inaction in January, February, and even March of this year, which compare unfavorably to a number of other countries, said the report.

On Friday afternoon, the coronavirus has infected 245,573 people in the U.S., killing at least 6,058, according to Johns Hopkins University.

Here are the four phases of the US government’s crisis response from the report.

From the first knowledge of the virus’s spread in Wuhan in early January through nearly the end of that month, the administration publicly treated the virus as a minor threat that was under control, at least domestically, and repeatedly assured the public that the risk to Americans was very low.

However, by the middle of January, the virus had clearly spread beyond China, as cases were reported in Thailand, Japan, and South Korea, among other countries. On January 17, the US Centers for Disease Control and Prevention (CDC) started screening procedures at three U.S. airports for passengers who had been traveling in Wuhan, but by then the virus had already spread to countries other than China. By the end of the month, there were about 12,000 reported cases in China, and growing rapidly by the day. At this point, the U.S. had a handful of confirmed cases, but there was almost certainly already significant community spread in the Seattle area.

Beginning with the creation of the White House Coronavirus Task Force on January 27 and the declaration of a public health emergency on January 31, the federal government began to put in motion executive, legal, and regulatory pandemic response procedures that were already on the books. It also banned foreign nationals who had traveled to the Chinese mainland from entering the country.

Most critically for this second phase, it was clear early on that any effective response was going to depend on rapidly scaling our testing capacity. The virus genome was publicly available in mid-January, and the first tests were developed shortly thereafter. The World Health Organization (WHO) sent hundreds of thousands of tests to dozens of laboratories around the world by early February. But the Trump administration and CDC decided to rely exclusively on domestically developed tests, apparently in keeping with past practice. The CDC developed its own test in early February, which was then distributed to labs. But, as became clear roughly a week later, one of the reagents in its kits proved to be faulty, which meant that most labs were unable to proceed using CDC-provided test kits.

Nevertheless, for at least two weeks after the problem became clear, alternative paths to testing were either neglected or stymied by existing regulations. Indeed, although the Emergency Use Authorizations required by the declaration of a public health emergency were meant to facilitate rapid testing, it soon became clear that their required procedures were actually significantly retarding the development of effective testing at scale. CDC was reassuring state and local officials that testing capacity was adequate in late February, although it was reported that fewer than 500 tests had been conducted at that point. (CDC’s own count, which includes its own tests plus those of U.S. public health labs, puts the total number of tests at the end of February at around 4,000.) Perversely, the failure to test at scale kept the publicly recognized number of cases low, which served as a justification for insisting that the existing testing regime was adequate.

This phase lasted through nearly all of February—a lost month during a critical period. As China and other countries took extreme measures to contain the spread of the disease, the federal government and most state and local governments took few actions to disrupt normal economic and social life—indeed, some governments infamously discouraged their citizens from altering their behavior. By the end of the month, the United States had two dozen confirmed cases (artificially low because of the low levels of testing), and Italy was already in the early stages of uncontrolled viral spread with nearly 2,000 reported cases.

A third phase began in late February, when the CDC and the Food and Drug Administration (FDA) demonstrated a clear shift in their sense of urgency. Beginning with the CDC widening testing criteria on February 28 and FDA allowing use of non-approved tests (with retroactive approval) on February 29, the federal government signaled that it had begun to recognize and correct for the flaws in its testing regime. Travel bans were extended to foreign nationals who had traveled in Iran. US Federal officials worked more concertedly to promote private sector involvement in the crisis response, and Congress passed an $8.6 billion supplemental appropriation bill to promote vaccine and treatment research, emergency telehealth, and preparedness.

Although testing was finally expanding during this phase, availability was still severely limited, in spite of the administration’s insistence that there was adequate testing.

The fourth phase, dating from President Trump’s nationally televised address on March 11 and his March 13 declaration of a national emergency, finally saw the federal government fully engage in its efforts to hasten mass testing, improve the availability of medical supplies, and encourage all Americans to radically alter their behavior in order to arrest the spread of the virus. Further travel restrictions were placed on foreign nationals who had traveled in continental Europe, and then in the United Kingdom and Ireland. Various emergency powers, including the Defense Production Act, were activated and then later employed.

Commercial tests were approved quickly and mass testing finally became a reality—which, in turn, helped reveal the considerably advanced spread in the U.S. Over the month of March, confirmed cases in the United States increased at a rapid clip, passing 100 (March 5), then 1,000 (March 11), then 10,000 (March 18), and by the end of the month 100,000 (March 27), reflecting in part that our testing capacity had begun to catch up with the reality on the ground.