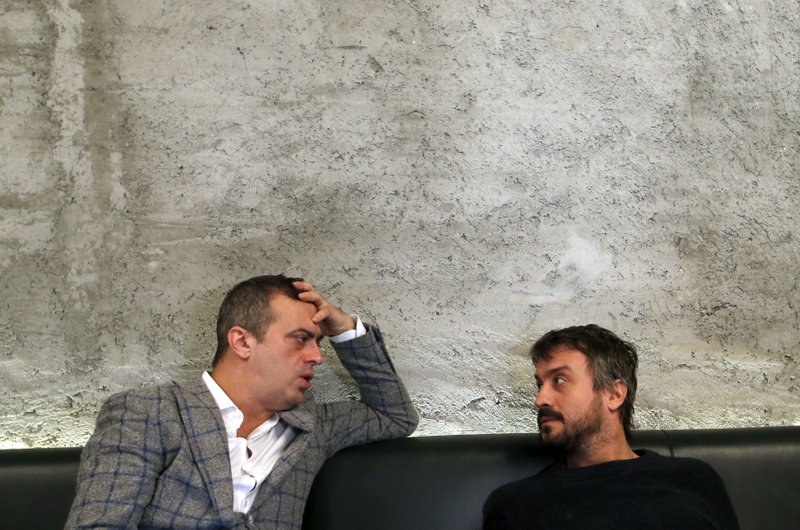 Taking center stage in the weekly protests against Serbia’s autocratic president was a role that actors Sergej and Branislav Trifunovic felt compelled to play.

The two brothers are among the main public faces of the demonstrations against populist leader Aleksandar Vucic’s firm grip on power that started in early December. They march with the masses and speak at rallies. Sergej Trifunovic also has taken a role leading a liberal political movement.

The Trifunovics, who act in Serbian theater productions, films and TV shows, say they couldn’t bow out from the struggle for democracy in the Balkan country because they believe everyone should do their part.

“Nobody else would do it. Somebody had to,” older brother Sergej Trifunovic, 46, said of his decision to officially enter the political arena. “We can’t just sit with our hands on our backs, waiting for a messiah to fall from the sky and solve our problems.”

Serbs first took to the streets Dec. 8 after thugs beat an opposition leader with brass knuckles, briefly knocking him unconscious and injuring his two associates. Images of Left party leader Borko Stefanovic with a bloody head and shirt alarmed citizens who thought the days of political violence were behind them.

In an unusual twist, it has been public figures spearheading the protests rather than opposition politicians. With university professors, lawyers and other prominent citizens leading the way, the demonstrations have attracted support from Serbs who no longer trust established political parties to root out corruption or to improve the economy.

Sergej Trifunovic has stood out with his outspoken criticism of Serbia’s government. Such open political involvement comes with a price — greater public scrutiny and fierce attacks in pro-government tabloids.

For the Trifunovics, though, the protests are the “last chance” to pull Serbia back from the “edge of an abyss,” said Branislav Trifunovic, 41.

“We didn’t really need this, Sergej and I. We could have just lived on our comfortable lives and have fun,” he said. “But it all hurts me, all the lies and manipulation, all the stealing, corruption. It’s all an insult to common sense.”

Serbia spent decades under Socialism as part of the former Yugoslavia and then was led by a nationalist president, Slobodan Milosevic, who launched multiple wars with neighboring republics that declared independence. A popular uprising ousted Milosevic in 2000.

In Vucic, a former extreme nationalist who became prime minister in 2014 and was elected president in 2017, many see a danger to their country’s hard-won democracy. Protesters have accused the president of fostering bitter divisions while imposing strict control over mainstream media, the security system and other pillars of power.

The Trifunovic brothers stepped in almost from the start: Branislav Trifunovic spoke at the first protest and later joined the protest organizers. His older brother verbally clashed with Vucic’s supporters, who have sought to downplay the weekly gatherings.

Notorious for cursing in public, Sergej Trifunovic has sometimes angered even Vucic’s opponents, including when he mocked Serbia’s openly gay Prime Minister Ana Brnabic when her partner gave birth to a baby boy. He later said his comments meant no harm.

In what many saw as retribution for his criticism of Vucic, a play featuring Sergej Trifunovic was removed from a theatre festival last fall, while authorities investigate a charity fund for children that he runs. Most recently, a senior police official threatened a libel suit after he said at one of the protests that she was “dating a guy who’s dealing drugs.”

“I’ve been the enemy of the state for a while now,” Sergej Trifunovic joked, noting that he took part in anti-Milosevic protests during the 1990s’ as well.

The brothers said they didn’t think twice about their celebrity images as they shifted from entertainment to real-life concerns with high stakes. They recently posted Twitter videos of themselves boozing it up and partying, behavior that many people in this conservative country deem unfit for political figures.

“The moment you enter politics and openly take sides ... you strip yourself of half of your audience, who will no longer view you the same way,” Branislav Trifunovic said.

The demonstrations have not appeared to visibly shake Vucic’s position, although some analysts detect shifts in the political atmosphere that they believe fuel hope changes are possible.

“Protests would not have lasted if the citizens hadn’t seen them as a form of free civic forum,” said Teofil Pancic, a columnist for Serbia’s liberal Vreme (Time) weekly. “Everything seems the same on the surface ... but in reality, the countdown has started.”

Vucic denies being autocratic and has suggested he might call an early election in response to the protests. Beleaguered opposition leaders have pledged to boycott any future elections that don’t include free media and equal starting position for all candidates.

Sergej and Branislav Trifunovic said they want to withdraw from politics once Serbia becomes a true democracy with the rule of law.

“I fight for a Serbia without an autocracy ... and once it is done, I will say ‘Goodbye, come watch me in the theater,’” Sergej Trifunovic said. “But I won’t give up. I will go to the end. I always do.”