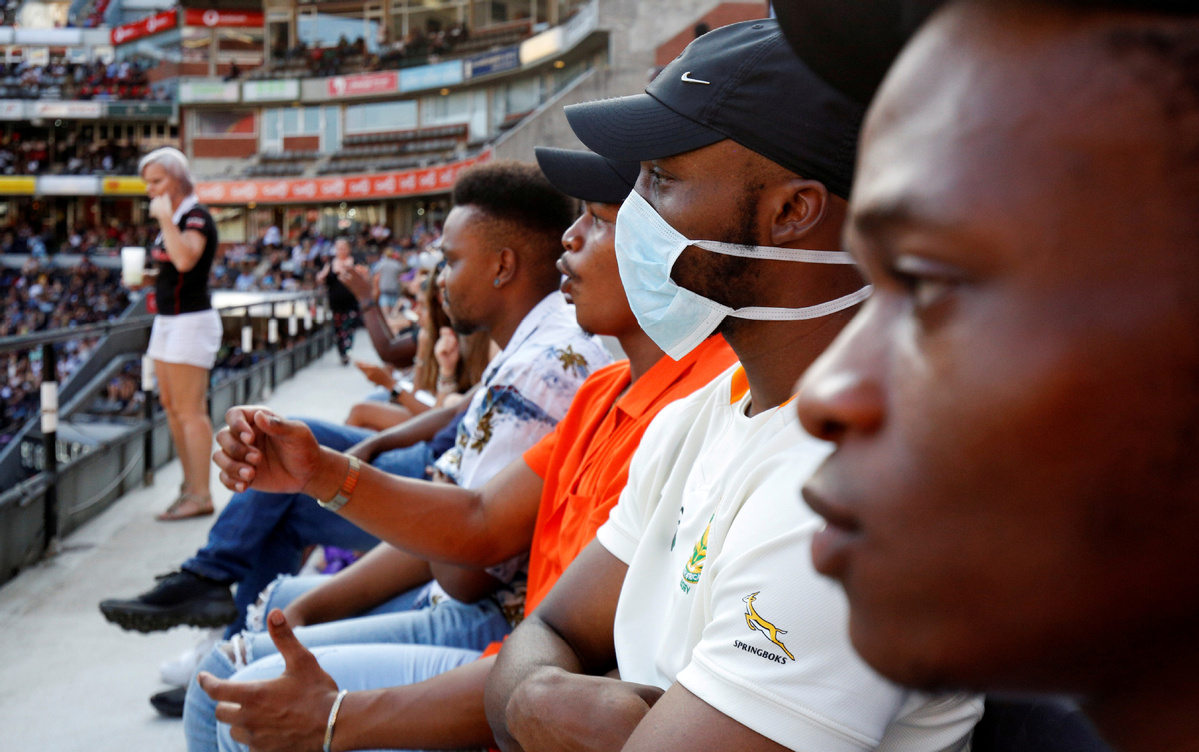 A fan wears a face mask during a Super Rugby match between the Sharks and the Stormers in Durban, South Africa, March 14, 2020. (Photo: Agencies)

The African Development Bank on Tuesday and Wednesday approved two emergency grants, aimed at curbing both the coronavirus that has so far infected 6,470 Africans and killed 241, and desert locusts that have ravaged East Africa and the Horn of Africa regions.

The coronavirus grant, made in response to an international appeal by the World Health Organization, will be used to equip regional member countries to prevent, rapidly detect, investigate, contain and manage cases of coronavirus.

The WHO Africa Region will specifically use the funds to bolster the capacity of 41 African countries in infection prevention, testing and case management.

It will also boost surveillance systems, procure and distribute laboratory test kits and reagents and support coordination mechanisms at national and regional levels.

The bank's Human Capital Youth and Skills Development Department said the grant will enable regional member countries to put in place robust containment measures within 48 hours of case confirmation and support the WHO Africa Region to disseminate information and increase public awareness in communities.

The grant will go toward a $50 million WHO Preparedness and Response Plan, which other partners including the United Nations system are also supporting.

The bank is also expected to unveil a financial assistance package that will enable governments and businesses to undertake flexible responses to lessen the economic and social impact of the pandemic.

The board of directors of the African Development Bank also approved a $1.5 million emergency relief grant to assist nine countries in the East and Horn of Africa for the control of swarms of desert locusts that are threatening livelihoods and food security.

The proposed assistance will be channeled to the Intergovernmental Authority on Development or IGAD, which has been mandated to mobilize resources on behalf of the African Union.

IGAD is collaborating with the UN's Food and Agriculture Organization or FAO, which is leading coordination of development partner support to provide desert locust invasion control, safeguard livelihoods and promote early recovery of affected households in the East and Horn of Africa. FAO will act as the executing agency for the grant.

The funds will be used to control the spread of the current locust invasion, prevent potential next-generation swarms and to conduct impact assessment and monitoring to enhance preparedness and awareness. A portion of the funds would also be allocated to administrative costs.

Kenya, Ethiopia and Somalia have been particularly hard hit by the outbreak and widespread breeding of locusts that is expected to create new swarms in the coming weeks.

The infestation poses an unprecedented risk to livelihoods and food security in an already fragile region, and has caused huge damage to agricultural production.

In Ethiopia, the locusts have devastated more than 30,000 hectares of crops, including coffee and tea, which account for about 30 percent of the nation's exports according to the African Development Bank.

Despite government intervention, swarms and breeding have been reported in large parts of the country.

In Djibouti, over 80 percent of 1,700 agro-pastoral farms located in 23 production zones are affected by desert locust infestations.

At least 18 of 47 Kenyan counties are affected, with more than 70,000 hectares of crops under infestation according to recent FAO reports. Locust swarms are devastating pastureland, maize, cowpeas, beans and other crops despite the government's efforts to curb the outbreak.

Efforts to control the infestations will require around $147 million, of which $75 million has been provided by governments, donors and UN agencies including FAO and the World Food Program, the African Development Bank said.