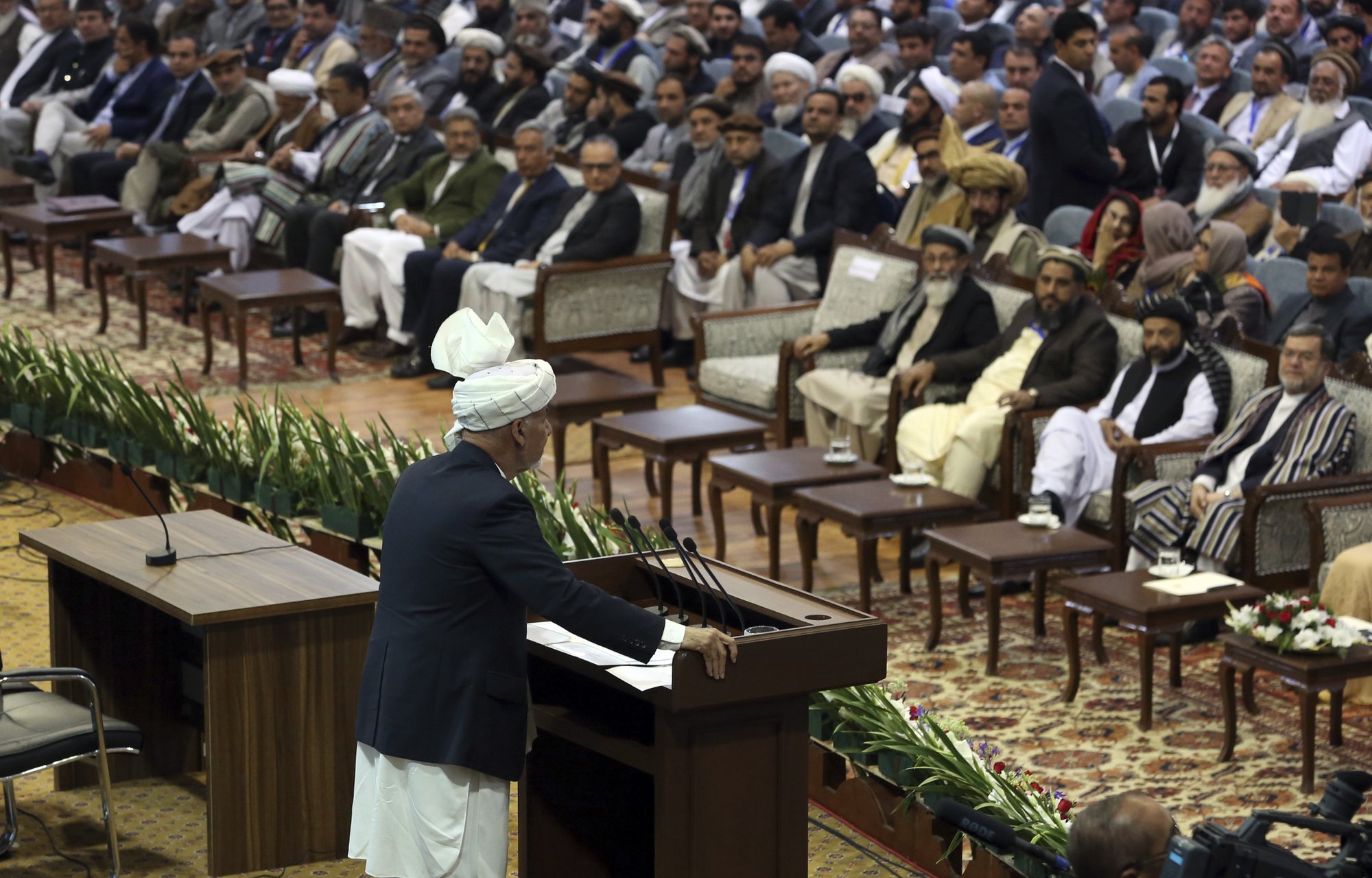 Afghan President Ashraf Ghani speaks during the first day of the Loya Jirga, or the consultative council in Kabul, Afghanistan, April 29, 2019. (Photo: AP)

Afghanistan’s president opened a grand council on Monday of more than 3,200 Afghans seeking to agree on a common approach to peace talks with the Taliban, but the gathering may further aggravate divisions within the US-backed government.

President Ashraf Ghani hopes to showcase unity at the four-day meeting — known as Loya Jirga — that brings together politicians, tribal elders, many prominent figures and others.

But Chief Executive Abdullah Abdullah, his partner in a unity government brokered by the United States after a bitterly disputed election in 2014, heads a list of no-shows.

Former President Hamid Karzai, who also is not attending, told The Associated Press on Monday that holding the council at this time risks “delaying and causing an impediment to the peace process.” He also voiced concern that by sidelining his chief executive, Ghani could trigger suspicion that personal ambitions may have partly driven him to hold the Loya Jirga now.

“We are all here to talk about the framework of peace talks with the Taliban ... reaching a sustainable peace is very important to us,” said Ghani in his welcome address to delegates.

Waving a copy of Afghanistan’s constitution, Ghani lauded it as the most Islamic of constitutions — an apparent message to the Taliban who have suggested they want to negotiate articles within the charter, without specifying.

Ghani gave the chairmanship of the council to Abdul Rasool Sayyaf, a former warlord with past links to Osama bin Laden and the militants who took control of Kabul after the collapse of the communist government in the early 1990s. He is known for adhering to a strict interpretation of Islam, and refusing to meet with women .

During the 2002 Loya Jirga to devise Afghanistan’s constitution following the US invasion, it was Sayyaf and his political allies who pressed for the inclusion of a clause prohibiting any laws that are deemed unacceptable to Islam.

In several rounds of talks with the Taliban, US envoy Zalmay Khalilzad has narrowed the gaps on a deal under which US forces would withdraw in return for guarantees that Afghanistan not revert to a haven for international terrorists. But Khalilzad has struggled to get Afghans to agree on a roadmap for the country’s future.

The Taliban have refused to directly talk to Kabul representatives, viewing the government as a US puppet.

Ahead of the council, Michael Kugelman, deputy director of the Asia Program at the Washington-based Wilson Center, said that “if Abdullah and his supporters don’t attend, there’s going to be a glaring absence of key stakeholders that will diminish the event’s credibility in a big way.”

The latest attempt at Afghan-to-Afghan talks — scheduled in Qatar earlier this month and intended to include the Taliban, Kabul government representatives, the opposition and other prominent figures — collapsed as the two sides were unable to agree on the participants.

Karzai urged the US to do more to press all sides to the table. “We are in a great hurry for peace.”

The Loya Jirga, a deeply-rooted tradition aimed at building consensus among Afghanistan’s various ethnic groups, tribes and factions, was intended to strengthen Ghani’s hand but risks being seen as just a gathering of loyalists.

The Americans appear increasingly impatient with Ghani, with Khalilzad tweeting his frustration after the Qatar talks fell apart. US Secretary of State Mike Pompeo called Ghani to urge him to join the talks in Doha, where the Taliban maintain an office.

Even Pakistan, which the US and Afghanistan regularly accuse of aiding insurgents, issued a statement saying talks were the only path to peace in Afghanistan. It promised not to interfere in Afghanistan’s internal affairs and even condemned the Taliban’s recent announcement of the start of their annual spring offensive.

“The so-called offensives are condemnable and will undermine the peace process. It is not right to seek an edge in dialogue through coercion,” Pakistan’s Prime Minister Imran Khan said. “Pakistan will not be party to any internal conflict in Afghanistan anymore.”

Over the weekend, Khalilzad tweeted his approval of Khan’s statement. The US envoy recently met with representatives of China and Russia, saying there is an “emerging international consensus on the US approach to end the war and assurances terrorism never again emanates from Afghanistan.”

The State Department said the US, Russia and China called for intra-Afghan talks, urged a cease-fire and supported “an orderly and responsible withdrawal of foreign troops from Afghanistan as part of the overall peace process.”

The statement also said the Taliban have agreed to fight Islamic State militants in Afghanistan and sever ties with al-Qaida, the Eastern Turkestan Islamic Movement and other militant groups. It said the Taliban have promised to “ensure the areas they control will not be used to threaten any other country” and called on the insurgents “to prevent terrorist recruiting, training, and fundraising, and expel any known terrorists.”

The Taliban effectively control nearly half of Afghanistan and have continued to carry out daily attacks despite their talks with Khalilzad. They have also refused to agree to any cease-fire before international troops withdraw.

A Taliban official familiar with the talks said the two sides are still haggling over a timetable for the withdrawal of US troops, with the Taliban demanding six months and the US seeking 18 months. The Taliban official spoke on condition of anonymity because he is not authorized to speak to the media.

But even as Khalilzad nears an agreement with the Taliban, he appears increasingly at odds with Kabul. During a visit to Washington last month, Ghani’s national security adviser, Hamdullah Mohib, accused Khalilzad of personal ambitions and sidelining the government.

Ordinary Afghans, who have endured decades of war, express frustration with both sides.

Hajji Sher Aga, who owns a gas station near Kabul, complained about the lack of security and lawlessness. He blamed widespread government corruption and said peace with the Taliban was the only answer.

“The Taliban are also Afghan,” said Hajji Noor Aga, one of his workers.