KABUL, Afghanistan (AP) — Some Afghans lined up for hours to cast their vote Saturday in parliamentary elections that are being protected by tens of thousands of security forces on alert nationwide following a campaign marred by relentless violence. 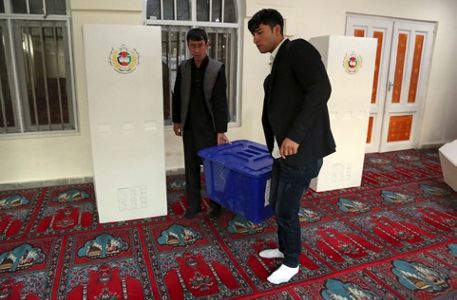 In some parts of the capital Kabul, voters waited for polls to open five hours after the official opening time of 7 a.m. In some of Kabul's western neighborhoods, voters were posting pictures of closed polling stations hours after they were scheduled to open.

Poll workers struggled with a new biometric system and in several polling stations workers took an extraordinary amount of time to locate names on voter lists. In some polling stations in Kabul, voting started considerably late leading to small disturbances by frustrated voters, some of whom had come to vote nearly two hours before polls opened.

The new biometric machines meant to curtail fraud were late additions to Afghanistan's elections and had not been tested in the field and workers had not had more than a few weeks to learn the system. Even the Independent Election Commission chairman, Abdul Badih Sayat, warned ahead of polling that the system might experience glitches and asked for voters' patience. 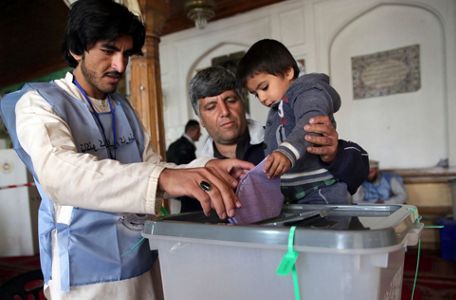 A man lets his child to cast his vote in Parliamentary elections in old city of Kabul, Afghanistan, Saturday, Oct. 20, 2018.

As the extent of the delays began to be known, Sayat went on national television to promise that everyone who wanted to vote would have an opportunity but stopped short of extending voting hours beyond 4 p.m.

"The people rushed like a flood to the polling stations, but the election commission employees were not present, and in some cases they were there but there were no electoral materials and in most cases the biometric systems was not working," he said.

Meanwhile, the Defense Ministry said it had increased its deployment of National Security Forces to 70,000 from the original 50,000 to protect the country's 21,000 polling stations.

Elections in the two provinces of Kandahar and Ghazni have been delayed as well as in 11 of the country's nearly 400 districts. 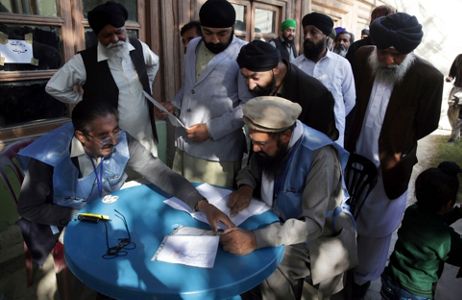 Men from the minority Sikh register to cast their votes in Parliamentary elections in old city of Kabul, Afghanistan, Saturday, Oct. 20, 2018.

Afghan President Ashraf Ghani marked his ballot at the start of voting. In a televised speech afterward, he congratulated Afghans on another election and praised the security forces, particularly the air force, for getting ballots to Afghanistan's remotest corners. He also reminded those elected to Parliament that they are there to serve the people and ensure the rule of law.

"We don't care about their threats. The Taliban are threatening us all the time," said 55-year-old Baksh, who said he wanted to see a new generation of politicians take power in Afghanistan's 249-seat Parliament. He bemoaned the current Parliament dominated by warlords and a corrupt elite. "They have done zero for us."

Chief Executive Abdullah Abdullah waited to mark his ballot as polling workers struggled to move voters through the process. 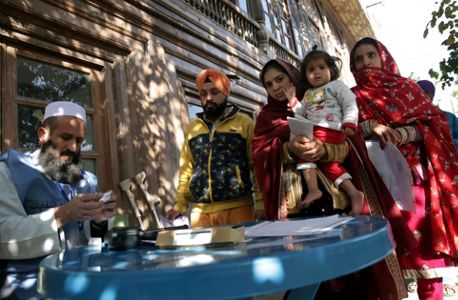 A man and women from the minority Sikh register to vote in Parliamentary elections in old city of Kabul, Afghanistan, Saturday, Oct. 20, 2018.

"Holding the election is a huge step in the lives of the Afghan people," Abdullah said after casting his vote. "The beginning of the process was a bit slow, but that was just because of a new system and the Independent Election Commission employees needed more instruction."

Within hours of the start of polling, several minor incidences of violence had occurred in Kabul as well as several provinces as both the upstart Islamic State group affiliate and the Taliban have vowed to disrupt elections

In the run-up to the elections, two candidates were killed while polling in Kandahar was delayed for a week after a rogue guard gunned down the powerful provincial police chief, Gen. Abdul Raziq. In the capital of Kabul, security was tight, with police and military personnel stopping vehicles at dozens of checkpoints throughout the congested city.

Commission deputy spokesman Aziz Ibrahimi said results of Saturday's voting will not be released before mid-November and final results will not be out until later in December. 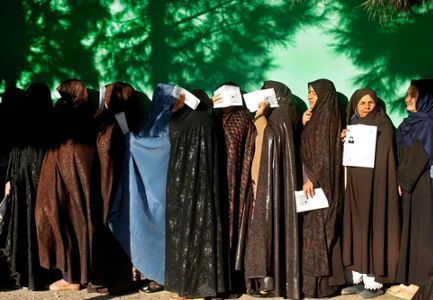 The Taliban have vowed to disrupt Saturday's vote, warning teachers and students not to allow schools to be used for as precincts and warning Afghans to stay away from the polls.

Ghani said Afghans alone are carrying out elections as he praised the millions of voters who registered, defying threats from insurgents.

"I thank you from the bottom of my heart," he said. "The more than 8 million people who registered have shown that they themselves will decide the future of Afghanistan."