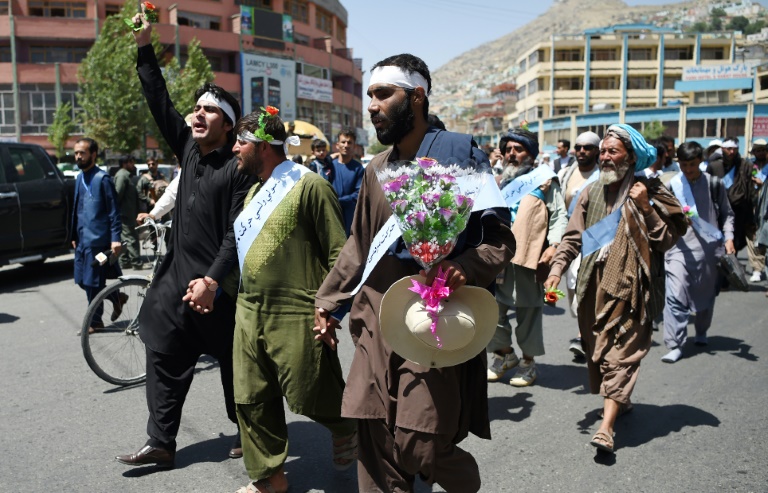 Dozens of peace protesters arrived in Kabul on Monday after walking hundreds of kilometres across war-battered Afghanistan, as the Taliban ended an unprecedented ceasefire and resumed attacks in several parts of the country.

Exhausted after their 700-kilometre (430-mile) 38-day trek, most of it during the Islamic fasting month of Ramadan, the marchers walked double file through the Afghan capital shouting "We want peace!" and "Stop fighting!"

"We want our people to stay united for peace and get rid of this misery for the next generation," Mohammad Naikzad, one of the marchers, told Tolo News.

"I am calling on both sides -- the government and the Taliban -- for God's sake... find a way for peace and reconciliation."

Fellow peace marcher Karwan also urged both the parties to work together to "bring lasting security in this country".

"Enough blood has been shed. So many people have been martyred in this ongoing conflict," he told Tolo News.

The Taliban refused to extend their three-day ceasefire beyond Sunday night despite pressure from ordinary people, the government and the international community.

Their fighters attacked security forces in the eastern provinces of Nangarhar, Kunar and Laghman, and in the southern provinces of Helmand and Kandahar, officials told AFP.

There were few details on casualties.

Defence ministry spokesman Mohammad Radmanesh said there had been fighting in nine provinces since the end of the Taliban's ceasefire, with 12 soldiers killed or wounded.

Around 2,500 Taliban fighters entered Kabul during the three-day ceasefire and most had refused to return to the battlefield, Radmanesh said.

"They are tired of war and have given up fighting, but our security and defence forces are ready to prevent and respond to any threat," he added.

The peace march, believed to be the first of its kind in Afghanistan, grew out of a sit-in protest and hunger strike in Lashkar Gah, the capital of the southern province of Helmand which is a Taliban stronghold.

That demonstration, which began spontaneously after a car bomb attack in the city on March 23, triggered similar movements by war-weary Afghans nationwide.

But when the Taliban and security forces failed to heed their demands to stop fighting, some protesters decided to take their message directly to the country's top leaders.

Initially ridiculed for their plan to walk from Helmand to Kabul, the marchers now enjoy strong public support.

They are calling for an extended ceasefire, peace talks and a timetable for the withdrawal of foreign troops from Afghanistan -- which is also a key demand of the Taliban.

The Taliban announced Sunday they would not extend their ceasefire with Afghan police and troops despite describing the truce as "successful" and a demonstration that the militants were united.

"The mujahedeen across the country are ordered to continue their operations against the foreign invaders and their domestic stooges as usual," the group said in a statement.

The group also repeated its demand for direct talks with the United States and the withdrawal of foreign forces.

But the jubilation appeared to alarm Taliban leaders, who on Sunday ordered their fighters to stay at their posts or in areas under their control.

Some people took to social media to express disappointment and anger at the Taliban's refusal to extend the truce.

"Once again, they have shown that they love shedding the blood of innocent Afghans," Madena Momad wrote on Facebook.

Another user wrote: "The Taliban have no respect for the norms and lives of Afghan people."