KABUL, Aug. 17 (Xinhua) -- The Taliban did not want to have any internal or external enemies, and intended to form an inclusive government in Afghanistan, a Taliban spokesman said here on Tuesday. 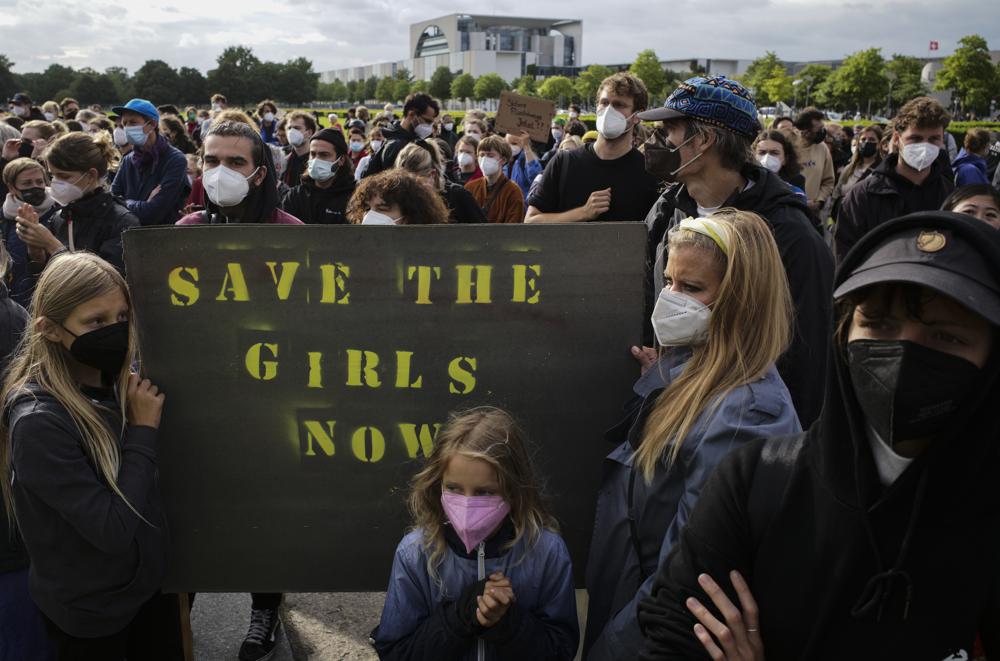 People hold a poster demanding the security of girls and other people in Afghanistan during a demonstration in Berlin, Germany, Tuesday, Aug. 17, 2021. (Photo: AP)

At its first press conference since the Taliban's takeover of most parts of Afghanistan on Sunday, the group's spokesman Zabihullah Mujahid said they did not want any internal or external enemies, and they wanted to have good relations with everybody to develop economy and achieve prosperity.

"We don't want to repeat any conflict, any war again," he said, "Animosities have come to an end, and we would like to live peacefully. We don't want any internal and external enemies."

Talking about current discussion of forming a new government, Mujahid said all Afghans would have representation in the future set-up of Afghanistan. "Talks and consultations are continuing very seriously with politicians on formation of the new government, over its name and its flag."

"Afghanistan will have a strong, Islamic government," he said, adding the Taliban leadership was working and consulting on the name and specification of the new government.

The spokesman said the Taliban supreme leader had declared a general amnesty, promising to ensure the safety of the contractors and translators who had worked for the U.S. and allied forces, the government soldiers who had been fighting the Taliban for years, and those whose families were attempting to leave Afghanistan.

"We have pardoned everybody for the benefit of stability or peace in Afghanistan," Mujahid said. He also called on the Afghans to stay as they are the nation's assets.

When asked about the Afghan women's rights, he said women could work and study in different fields including health sector, police and prosecutor within the framework of sharia or Islamic law, and they would be offered all rights within the Islamic principles, because women are vital parts of the society.

"We would like to assure the international community that there will be no discrimination."

The spokesman said Afghanistan wanted to have very good relations with foreign countries to revive its economy and ensure prosperity, and the Taliban would use the country's natural resources for national reconstruction.

Afghanistan would be drug free if the international community provided assistance to the country so that it would have alternative crops for the country, he said.

The Taliban had controlled Afghanistan's all borders, said Mujahid, adding that there would be no smuggling of weapons, and all weapons in the fighting would be collected and registered.

When asked about the risk of Afghanistan hosting al-Qaida militants, the spokesman said, "Afghanistan's soil is not going to be used against anybody ... We can assure the international community of that."

He also said that private media could continue to be free and independent, and it should not work against the Taliban.

In another development, Mullah Abdul Ghani Baradar, political chief of Taliban, returned to Afghanistan from Qatar on Tuesday.

Since the U.S. troops started to pull out of Afghanistan from May 1, the Taliban began to launch major offensives on Afghan forces. During the past two weeks, the military group has captured most of Afghanistan's territories in its blitz attacks, including the capital of Kabul.