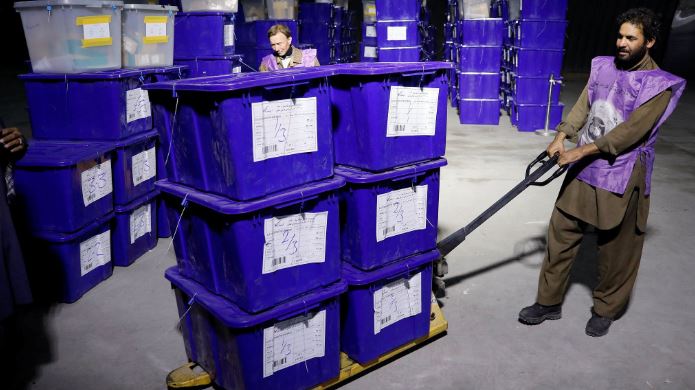 People in war-torn Afghanistan are heading to polls for the much-delayed parliamentary elections.

Since the US-led international coalition toppled the Taliban in Afghanistan in 2001, the country has started to seek a democratic political transition, but the expectations were dashed over and over again.

The standoff after the disputed 2014 presidential election took the country to the brink of civil war.

The current assembly's five-year term ended in 2015, but due to security concerns and two parties' agreement on comprehensively reviewing of the electoral system, the election is then deferred two times.

The October 20 poll matters because it is seen as a test ahead of the presidential elections slated for next year or a test for the whole country's elusive democratization step.

While parliament itself has limited power, for candidates the positions provide access to both government and international funds.

There are rampant rumors of candidates spending millions on campaigns, pointing to the amount of income they can expect to generate if they are successful.

To the current ruling elites, the election is a test of the reforms undertaken and the ability of the country's much-criticized election commission to organize free and fair elections.

Thus, the election results may threaten the uneasy truce between the groups that compose the National Unity Government.

For the country's foreign partners, they wish to witness a flourishing and peaceful election so that they could finally get the return they're seeking after many years of investment, billions of dollars spent and thousands of lives lost in more than a decade of fighting.

The election process will also greatly complicate any attempts at further peace talks and lead the US administration to decide whether to withdraw or reinforce order by sending more troops.

Meanwhile, the unsmooth election could also reignite the question about the tribal society's ability to identify itself with the West's definition of democracy.

No security, no transparency, no confidence

Though the government has dedicated 54,000 troops to secure 5,100 voting centers across 387 districts of the country, the biggest challenge for the election is still how to ensure complete security.

A gunman wearing an Afghan army uniform opened fire Thursday on participants in a meeting discussing security for Saturday's parliamentary elections with the top US commander in Afghanistan's Kandahar, killing three senior provincial officials including the top security leadership of Kandahar.

This is not the first Taliban claimed attack deliberately targeting the vote. At least nine parliament candidates (including a woman) have already been killed in different provinces.

According to the UN Assistance Mission in Afghanistan (UNAMA) figures (October 10), there were more than 8,050 civilian casualties (2,798 deaths and 5,252 injured) between January and September 2018.

The Independent Election Commission of Afghanistan (IEC) admitted that polling could not be held in 900 centers in Taliban-controlled areas and the situation in about 3,000 centers is uncertain because of fear of violence.

Besides, the formidable challenge for the IEC is to register and issue new biometric identity cards to 14 million voters out of a population of 36.6 million (as of 2018).

Since the registration process began in April 2018, only four million have been registered so far according to the IEC. The process has been repeatedly disrupted due to attacks by the Taliban on registration centers across the country.

Security isn't the only issue threatening the vote. Past elections have been marred by corruption and fraud, with cases of ballot box stuffing, multiple voting and voter intimidation all documented.

Even before the voting, there is evidence to suggest the process has been corrupted. For example, the number of voters registered in some provinces is higher than the actual number of people believed to be living there.

To combat fraud, biometric devices are being sent to polling stations around the country, but Afghan politicians have raised concerns about their reliability, and there's a possibility that these devices could undermine the legitimacy of the elections if they are seen as being manipulated and corrupted.

In this context, public confidence in the government and the IEC is already low.

Many young and educated candidates are also running this time around while the number of women candidates is still quite low – 417 out of 2,565 candidates.

The young wave, most of whom have been educated since 2001, includes entrepreneurs, journalists, teachers, and former government employees.

Many Afghans hope that these young people can challenge established politicians and the status quo, battle against corruption and encourage democratization.

Samiullah Mahdi, a former journalist, believes it is high time the young generation in Afghanistan takes a lead in political affairs and turns things around.

"Afghanistan's young generation has played an important role in media development, and I believe that if the young people get a chance, they can also transform the country's political institutions," Mahdi said.

Experts are positive to the young wave saying they represent a genuine alternative from the generation of Afghan leaders who earned their reputations during the war against the Soviets and the ensuing civil war that tore the country apart.

Afghan constitution guarantees 68 seats in the parliaments (27 percent of the total) for women regardless of their vote share. However, Women's participation in the democratic process has not increased much since the 2010 elections.

During 2018 the president sought parliament's approval for 11 ministers. The only one who failed to win the backing of parliament was a woman.

The house also failed to pass legislation to defend women's basic rights, rejecting the law for the Elimination of Violence against Women.

Last week a blast at an election rally of a woman candidate in the northeastern province of Takhar killed 22 people and wounded 35.