WORLD Afghanistan running out of oxygen as COVID surge worsens

Afghanistan running out of oxygen as COVID surge worsens

Afghanistan's is racing to ramp up supplies of oxygen as a deadly third surge of COVID-19 worsens, a senior health official told The Associated Press in an interview Saturday. 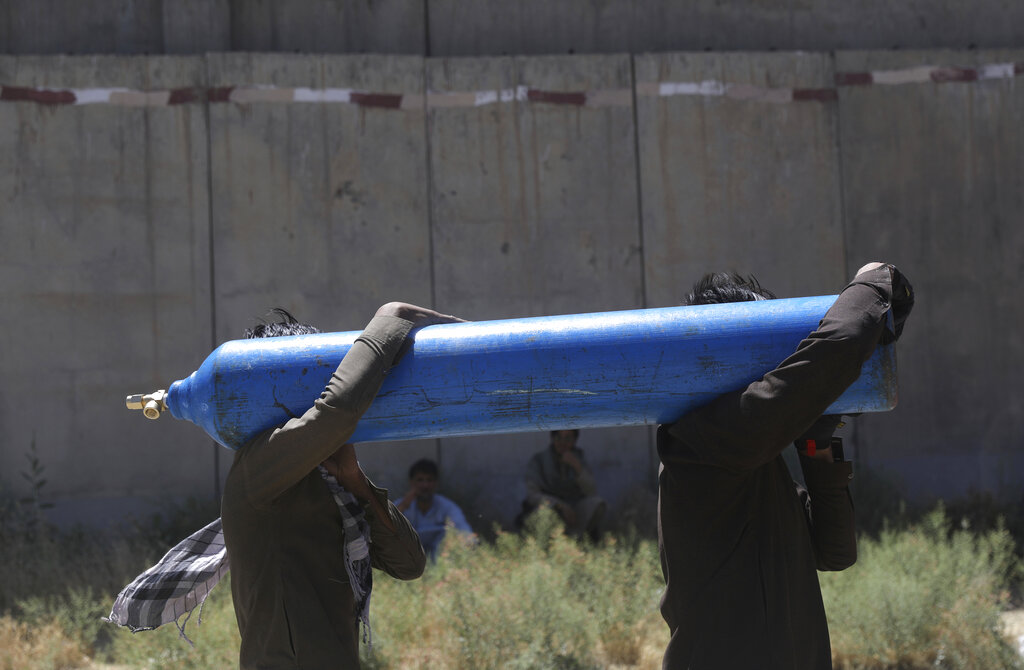 Men carry a cylinder to be refilled from a privately owned oxygen factory, in Kabul, Afghanistan, Saturday, June 19, 2021. (Photo: AP)

The government is installing oxygen supply plants in 10 provinces where up to 65% of those tested in some areas are COVID positive, health ministry spokesman Ghulam Dastigir Nazari said.

By WHO recommendations, anything higher than 5% shows officials aren’t testing widely enough, allowing the virus to spread unchecked. Afghanistan carries out barely 4,000 tests a day and often much less.

Afghanistan's 24-hour infection count has also continued its upward climb from 1,500 at the end of May when the health ministry was already calling the surge “a crisis,” to more than 2,300 this week. Since the pandemic outbreak, Afghanistan is reporting 101,906 positive cases and 4,122 deaths. But those figures are likely a massive undercount, registering only deaths in hospitals — not the far greater numbers who die at home.

Afghanistan has even run out of empty cylinders, receiving a delivery of 1,000 last week from Uzbekistan.

Meanwhile hospitals are rationing their oxygen supplies. Afghans desperate for oxygen are banging on the doors of the few oxygen suppliers in the Afghan capital, begging for their empty cylinders to be filled for COVID infected loved ones at home.

Abdul Wasi, whose wife has been sick for nearly 10 days, has been waiting four days for one 45-liter cylinder to be filled at the Najb Siddiqi oxygen plant in east Kabul. Scores of mostly men were banging on the 10-foot steel gate of the oxygen plant. Some rolled their empty oxygen cylinders up against the gate, while others waved small slips of paper carrying the number of their cylinder inside the plant, waiting to be filled.

Wasi said there were no hospital beds for his wife, whose oxygen level hovers around 70-80%. They are rationing her, he said giving her small amounts of oxygen when it drops to around 45 -50%.

For the country’s poor — over half of Afghanistan 36 million people according to World Bank figures — the situation has become desperate.

Wasi said on Friday as he waited outside the oxygen plant that a patient on a stretcher was carried to the door while the family begged for oxygen. The patient died.

“Right there,” he said pointing to the gate. “I saw them carrying the patient. They were crying and begging and then he died.”

Barat Ali had arrived at the plant at 6 a.m. Saturday. It was his third day waiting for his cylinder to be filled.

“The poor people in this country have nothing. I have been standing in the sun for eight hours,” he said clutching his small piece of paper that contained his cylinder number. The government “has eaten all the (international) donations.”

Necephor Mghendi, who is the Afghanistan delegation head for the International Federation of Red Cross and Red Crescent Societies, told the AP in an interview in Kabul that the groups are working to get an oxygen generation plant into the country. The Afghan Red Crescent runs a 50-bed hospital devoted to COVID patients and uses roughly 250 cylinders a day, but in recent days it has been receiving barely half that many.

The needs are critical he said, offering as an example one patient currently at the Red Crescent hospital who needs one 45-litre cylinder every 15 minutes to stay alive, he said.

“The situation is very concerning,” he said.

Inside the Najib Siddiqi oxygen plant dozens of cylinders were being filled, but owner Najib Siddiqi said he can’t keep up. He supplies hospitals but has cut output to them by half, with the other half going to the crowds banging on his gates. He even fills smaller cylinders for free, but he has only the capacity to fill 450-500 cylinders a day.

“It’s not enough. They are outside like this all day,” he said.

Sakhi Ahmad Payman, chairman of the Afghanistan Chamber of Industries and Mines, who was inside the plant having made a tour of the oxygen plants in the city, said all nine facilities in Kabul were overwhelmed. Countrywide he said Afghanistan has 30 oxygen producing plants, and all are unable to keep up with demand.

“They knew we were in the middle of a crisis and didn’t do anything until it was too late,” he said.