The Taliban's stance on women's rights should concern the world, one of Afghanistan's top female diplomats has warned, as the government holds power-sharing talks with the Islamist group that once banned girls from going to school. 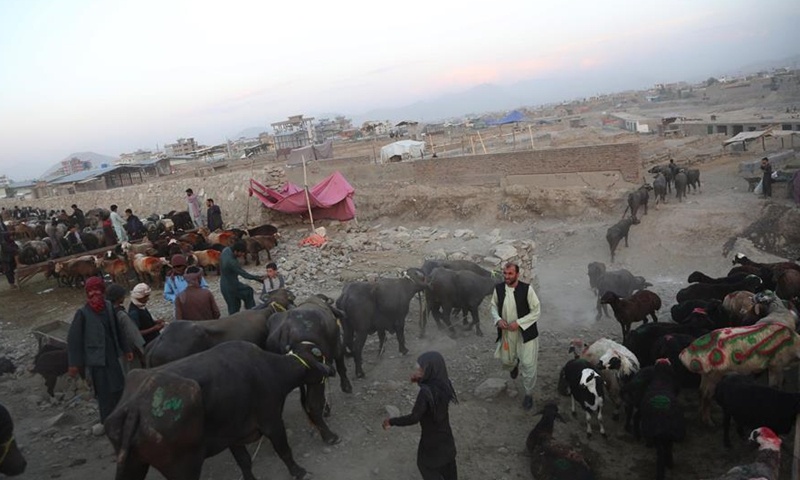 People visit a livestock market ahead of Eid al-Adha in Kabul, Afghanistan, on July 27.Photo: Xinhua

Afghanistan's first female ambassador to the United Nations Adela Raz said the world had invested heavily in empowering Afghan women after forcing the Taliban from power in 2001, and should pay heed to the hardline group's views on their future.

The Taliban, who began power-sharing talks in September with the Afghan government, say they would allow girls to be educated and women to work outside the home, in some circumstances. But they have given little detail on which of the hard-won rights they would allow women to retain, saying only that this would be decided according to Islamic sharia. This week, they opposed a move to have mothers' names on identity documents.

"Their definition of women's rights remains in the gray area," said Raz, speaking to Reuters from the UN headquarters in New York, where she is based.

"They have been saying the same thing about their version of the sharia without explaining any change and reforms.

"This is a concern not only for Afghanistan, but for the international community who invested heavily in empowerment of the Afghan women," added Raz, 34, who earlier in September oversaw Afghanistan's election to the UN Commission on the Status of Women.

It is the first time Afghanistan has won a seat on the Commission, which is dedicated to empowering women globally - a victory hailed as a sign of progress for a country once notorious for the oppression of women.

Her focus at the UN will be to promote access to markets for women entrepreneurs, something she sees as key to their empowerment.

"We have many refreshing stories of successful women entrepreneurs who stood by themselves, their contributions are immense toward creating a fair society," she said, pointing to progress in India and Pakistan.

Raz spent her early childhood in Taliban-ruled Afghanistan, leaving Kabul in 2004 to study in the US after losing many close relatives and friends in the war.