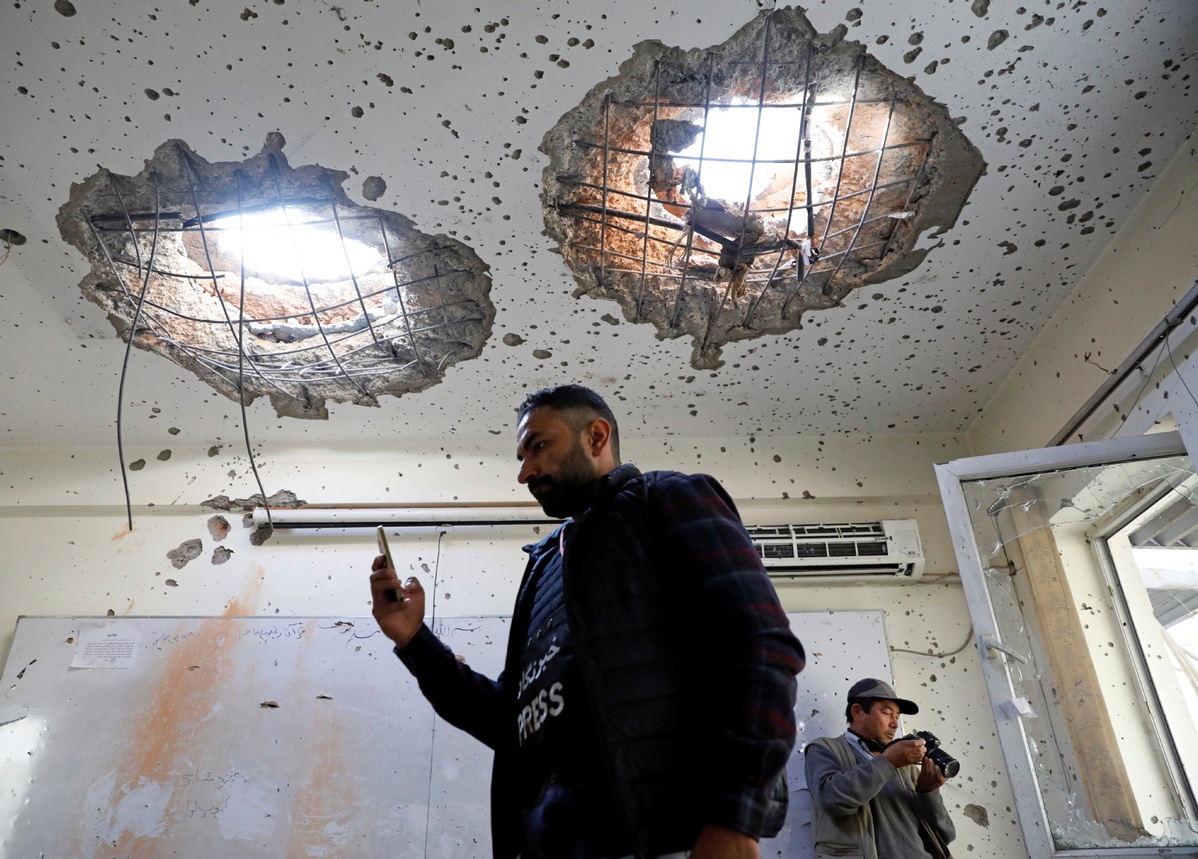 Journalists film inside a classroom on Tuesday after a terror attack at Kabul University in the Afghan capital. (Photo: China Daily)

Afghanistan declared a national day of mourning on Tuesday to honor the 35 mostly students killed in a horrific attack a day earlier on Kabul University, claimed by the Islamic State group.

Another 50 people were injured, some of them critically, government sources said.

Special prayers will be held at mosques across the country and national flags will be half-hoisted at government buildings and Afghan diplomatic missions abroad, the presidential office said in a statement.

Gunmen stormed Kabul University, shooting at students in their classroom and clashing with security forces for hours on Monday.

The assault was the second attack on an educational institution in the Afghan capital in as many weeks as violence and chaos soar across Afghanistan, even as Taliban negotiators and government officials hold peace talks in the Gulf state of Qatar.

Chinese Foreign Ministry spokesman Wang Wenbin said on Tuesday that China strongly condemns this terrorist act and offers sincere condolences to families of the victims and the wounded.

The IS affiliate also claimed responsibility for the earlier attack on Oct 24 that killed 24 young students. The attack occurred in the mostly Shiite neighborhood of Dasht-e-Barchi.

The IS affiliate has declared war on the country's minority Shiites and claimed responsibility for a number of vicious attacks since emerging in eastern Afghanistan in 2014.

Outside Kabul University, a small group of demonstrators on Tuesday gathered demanding a cease-fire and urging the government to withdraw from the peace talks until a permanent end to hostilities is declared. Some held signs reading "why are you killing us?"

The IS is not part of peace talks and despite its claims, the government has blamed the Taliban for the attacks.

The Taliban, like government forces, are fighting the IS and under an agreement signed with the United States, the Taliban have committed to fighting terrorism, specifically the IS.

The Taliban, which condemned the attack and denied involvement within hours of its start, have refused to declare a cease-fire, saying it would be part of the negotiations.

But if not a cease-fire, then a significant reduction in violence has taken on increasing importance as Washington's peace envoy Zalmay Khalilzad on Monday made a surprise visit to Pakistan asking Islamabad to urge the insurgent movement to reduce violence.

Pakistan has been critical in pushing the Taliban into talks. Even as the military group ousted by the US-led coalition in 2001 maintains its political office in Doha, where talks are being held, its leadership councils are located in Pakistan.

Khalilzad brokered a peace pact with the Taliban that was signed in February and seen at the time as the country's best chance at peace in more than 40 years of war.

The peace agreement allows US and NATO troops to withdraw from Afghanistan after 19 years. It also paved the way for the peace talks currently underway.

In a series of tweets on Tuesday, Khalilzad said: "This barbaric attack is not an opportunity for the government and the Taliban to score points against each other. There is a common enemy here".