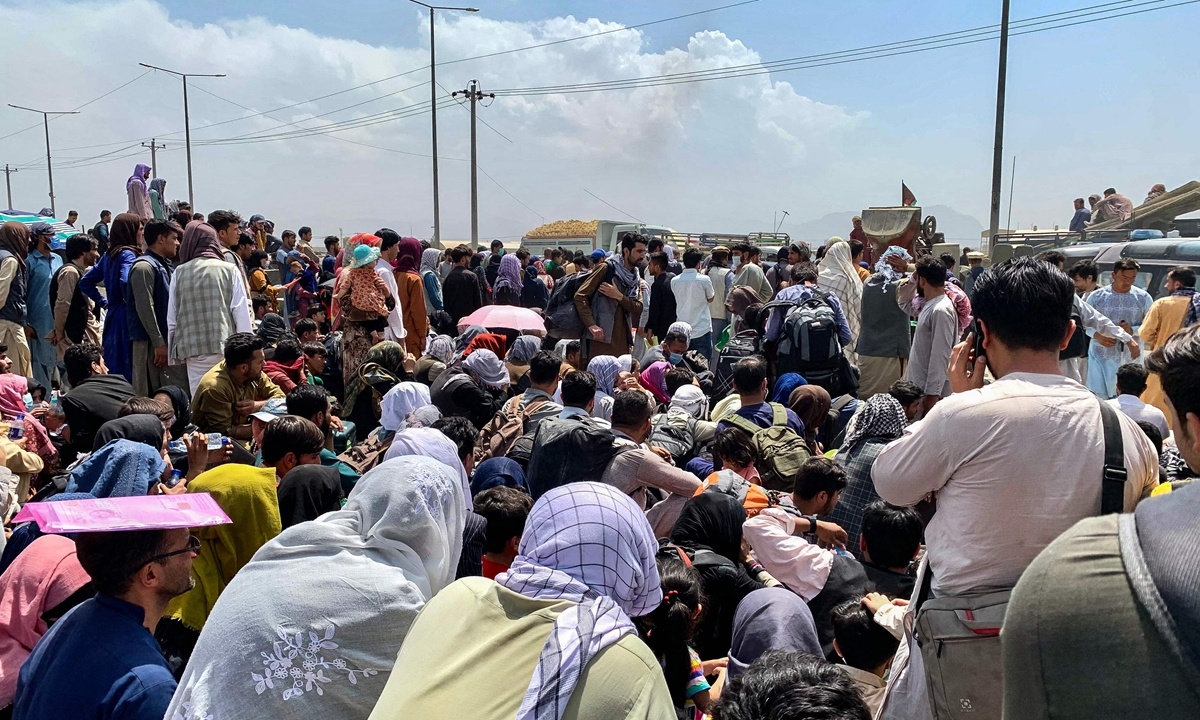 Afghans crowd a road as they wait to board a US military aircraft out of the country, at a military airport in Kabul on Friday, days after the Taliban's takeover of the capital. At least 40 have died in a stampede or from gunshots around the US military-controlled airport area. (Photo: VCG)

Tens of thousands of Afghans were racing Sunday to flee their country as the US warned of security threats at Kabul's chaotic airport and the European Union said it was "impossible" to evacuate everyone at risk from the Taliban.

In the week since the hardline Islamist militants took back power in Afghanistan, the Taliban have vowed a softer version of their rule from 1996-2001, and taken steps towards forming a government.

But terrified Afghans continue to try to flee, deepening a tragedy at Kabul airport where the US and its allies have been unable to cope with the huge numbers of people trying to get on evacuation flights.

A journalist, who was among a group of other media workers and academics lucky enough to get to the airport on Sunday for an evacuation flight, described desperate scenes of people surrounding their bus on the way in.

"The Taliban fighter in the truck ahead of us had to shoot in the air to make them go away."

Britain's Sky News on Saturday aired footage of at least three bodies covered in white tarpaulin outside the airport. It was not clear how they had died.

Sky reporter Stuart Ramsay, who was at the airport, called the deaths "inevitable" and said people were being "crushed," while others were "dehydrated and terrified."

The footage was the latest image of utter despair, after video of a baby being lifted over a wall at the airport and horror scenes of people hanging onto departing planes.

The US, which has thousands of troops trying to secure the airport, has set a deadline to complete the evacuations by August 31.

There are countless others who fear repression under the Taliban and are also trying to flee.

US President Joe Biden has described the evacuation operations as "one of the largest, most difficult airlifts in history."

The situation was further complicated on Saturday when the US government warned its citizens to stay away from the airport because of "security threats."

No specific reason was given, but a White House official later said Biden had been briefed on "counter terrorism" threats, including the Islamic State group.