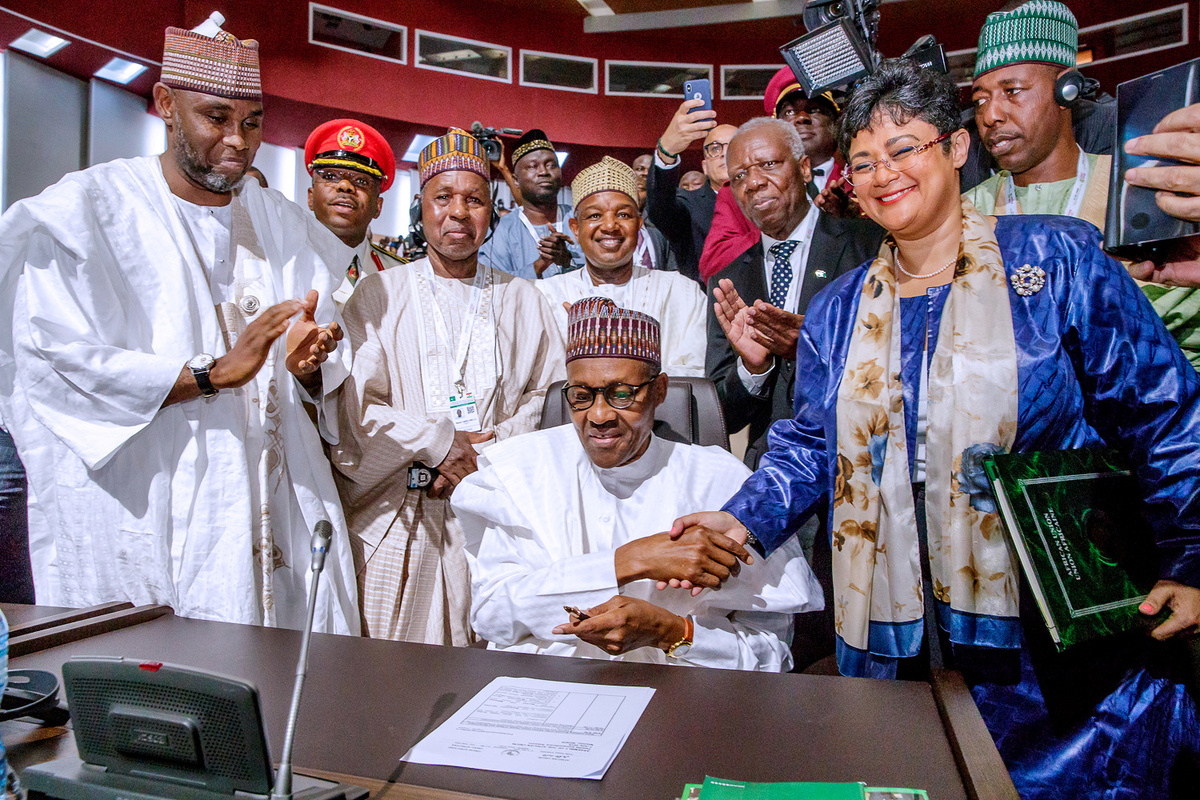 Nigerian President Muhammadu Buhari signs an agreement ahead of the launch of the African Continental Free Trade Area in Niamey, Niger, on Sunday. (Photo: Agencies)

After seven years of negotiations, African leaders met on Sunday to launch the largest free trade zone in the world, bringing together a population of approximately 1.2 billion and a combined GDP of $2.5 trillion.

Leaders attending an African Union summit in Niamey, Niger, agreed on five operational instruments to underpin the African Continental Free Trade Area. These are: regulations determining rules of origin, an online negotiating forum, a mechanism to monitor and eliminate non-tariff barriers, a digital payment system and an African Trade Observatory.

Intra-trade constituted only 17 percent of overall African exports in 2017, according to the UN Economic Commission for Africa, or UNECA. This compared with 59 percent within Asia and 69 percent within Europe.

The trade observatory will be established in 2020 by an African Union commission, the European Commission and the International Trade Center. The team is expected to accelerate the implementation of the zone by providing entrepreneurs, policymakers and other stakeholders with reliable trade data and statistics across the continent.

The trade zone has injected strong momentum into multilateralism, free trade and an open global economy, China Foreign Ministry spokesman Geng Shuang said on Monday. It shows the strong will and determination of African countries to work together for vitalization, Geng said.

China has been the largest trade partner for Africa for the last decade, and has supported firmly the construction of the African Continental Free Trade Area, he said. The pact has far-reaching significance for Africa's social and economic development, he said.

The trade pact was adopted on March 21, 2018 in Kigali, Rwanda. It entered into force on May 30, 30 days after having received the twenty-second instrument of ratification on April 29, 2019.

Nigeria and Benin became the 53rd and 54th signatories, leaving Eritrea as the only member of the African Union that has not signed.

"The speedy entry into force of the agreement is a source of pride for all of us," said Moussa Faki Mahamat, chairman of the African Union Commission.

Egyptian President Abdel Fattah el-Sisi called for the establishment of linkages with the private sector and the business and investment communities, while also calling for the involvement of the youth who will "continue the march" toward development.

Amina Mohammed, the United Nations deputy secretary-general, noted that the African FTA is a tool to drive growth and innovation for Africa, and to create opportunities for sustainable development and realizing Agenda 2063.

The effort to unite the economies of Africa into a single zone began in January 2012 in Addis Ababa where leaders agreed to eliminate barriers to trade, services, intellectual property and investment under the free trade agreement. The pact is expected to build on existing subregional and bilateral arrangements and help create a more integrated market in the continent.

The trade pact could boost regional trade and industrialization by 50 percent, according to UNECA. Smaller countries are poised to be the biggest winners with an increase of up to 68 percent of intra-trade.