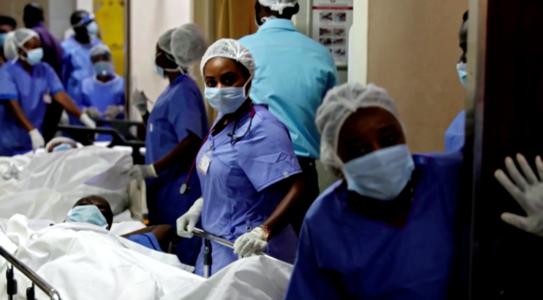 Average daily cases of coronavirus in Africa fell last week, a "hopeful sign" for the continent's fight against the disease, the head of the Africa Centres for Disease Control and Prevention (Africa CDC) said Thursday.

The continent-wide daily average was 10,300 last week, down from 11,000 the week before, Dr John Nkengasong said at a press briefing, adding that officials were greeting the news with "cautious optimism".

"We have begun to bend the curve slowly," he said.

"It is very, very early. We are dealing with a very delicate virus that spreads very quickly, but it's important to recognise those slight tendencies that are positive."

Africa had recorded 1,147,369 cases as of Thursday morning, about half of which were in South Africa, which has the fifth-highest total globally.

South Africa has seen its number of daily confirmed cases fall from a peak of over 12,000 to an average of 5,000, driving the drop in the continent-wide average.

But Nkengasong noted Thursday that countries in West and Central Africa were showing "similar trends".

"It's a good thing that suggests that we are doing the right things on the continent," he said.

"We take this news with cautious optimism because we really want our population to continue not to show what we call prevention fatigue."

Nkengasong also announced Thursday that Africa had crossed the threshold of 10 million COVID-19 tests, suggesting that some progress has been made in addressing the continent's considerable testing limitations.

He acknowledged, though, that testing is still well below what is needed to give a full picture of how the pandemic is progressing on the continent.

The Africa CDC announced last week that it would start large-scale antibody testing and that seven countries would participate in the first phase: Liberia, Sierra Leone, Zambia, Zimbabwe, Cameroon, Nigeria and Morocco.

Even with limited data, African health officials are increasingly sure that most coronavirus cases are asymptomatic -- Nkengasong put the portion at 70 to 80 percent -- and that deaths are relatively low, Nkengasong said.

"For sure our deaths... are not as high as in other parts of the world," he said, noting that official data put the fatality rate at 2.3 percent and there was little evidence this figure was off-base.

"We are beginning to be comforted with that number," he said.

"Member states are looking actively as to whether deaths are occurring massively in the community, and that is not the case."