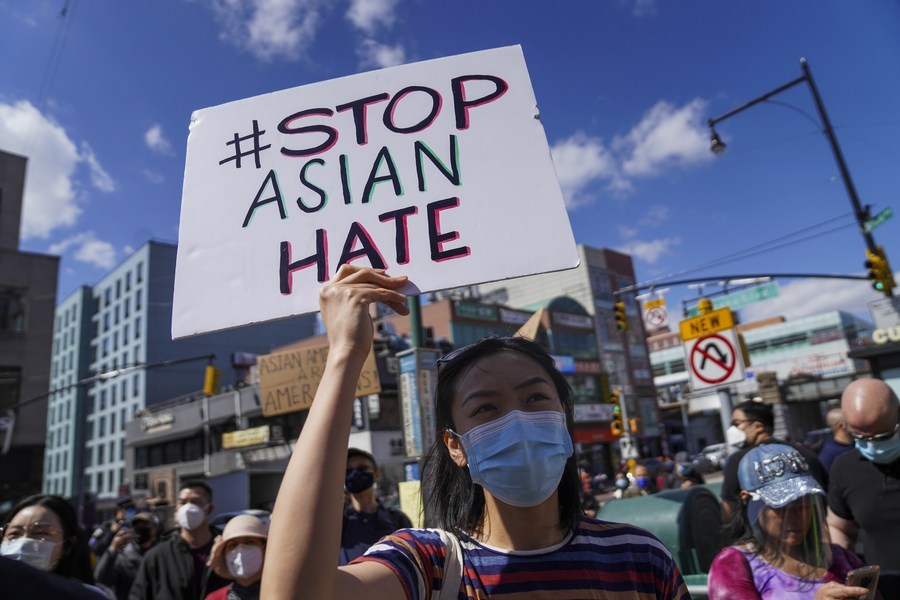 People attend a rally against racism and violence on Asian Americans in Flushing of New York, the United States, March 27, 2021. (Photo: Xinhua)

A coalition of African American and racial justice organizations that represent more than 53 million people in the US has thrown its support behind the Asian community in the wake of increased attacks racist attacks on Asian Americans.

The Racial Equity Anchor Collaborative — a diverse coalition of national racial justice and civil rights organizations — said it condemns in the strongest terms the murders of eight people, including six Asian-American women and one Asian-American man on March 16 in spas in Atlanta.

"Too often, racist policies at home and abroad pigeonhole Asian women, immigrant women, and poor women into unprotected, low-wage jobs — including as massage workers in spas — where they are subject to racist and sexist abuse on a daily basis, whether from their customers, employers or police," the collaborative said in a statement.

"These murders are the most recent large-scale manifestations of centuries of violence against communities of color... In the face of the disturbing rise in anti-Asian hate, this collaborative consistently has stood by the Asian community...We will continue to stand in solidarity with all those who are impacted by racist violence and attacks."

The organizations offered increased support in the wake of the Atlanta murders that were carried out by white suspect Robert Aaron Long, 21. The gunman's massacre took place at Young's Asian Massage in Acworth, Gold Spa and Aromatherapy Spa in Atlanta. The shootings haven't been classified as "racially motivated."

The deaths in the Atlanta area come amid a surge in anti-Asian hate crimes over the past year that has sparked fear among Asian Americans.