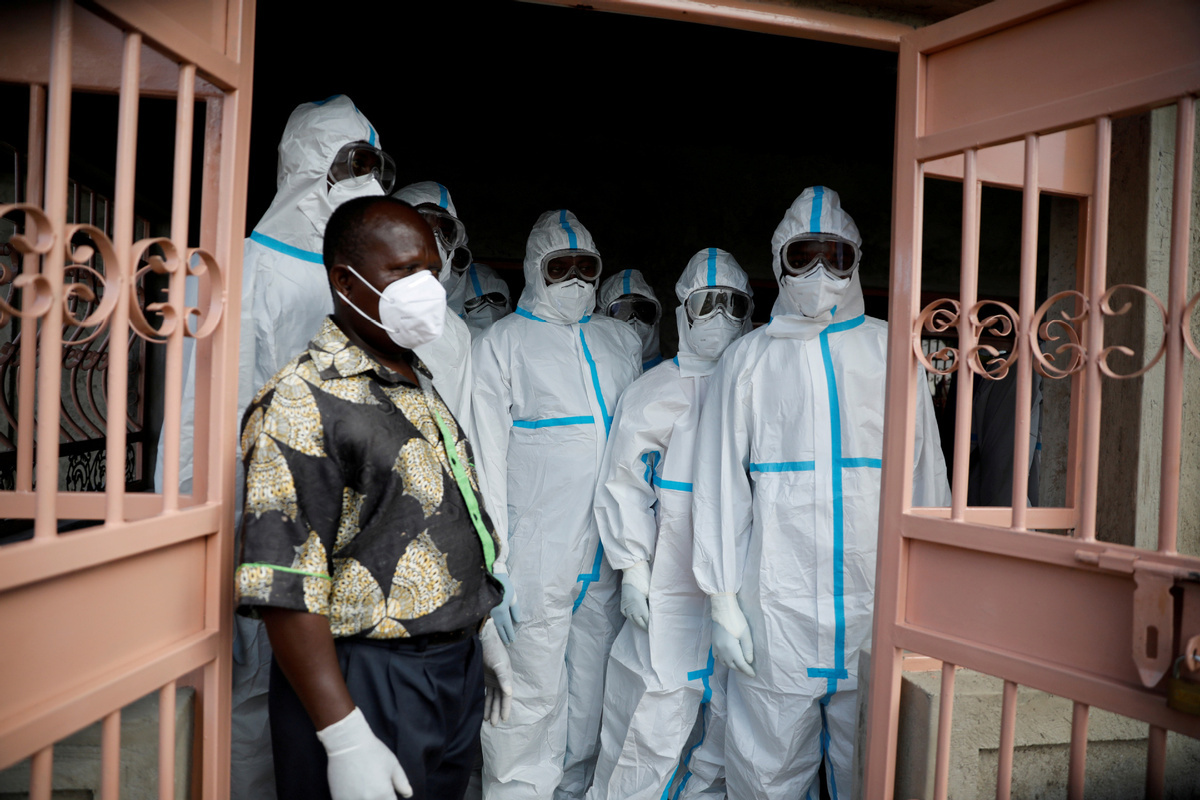 Men dressed in protective suits wait to carry the coffin of Kenyan doctor Daniel Alushula who died of coronavirus disease (COVID-19), during his funeral in the village of Khumusalaba, in Kakamega county, Kenya Nov 13, 2020. [Photo/Agencies]

Many African countries that had initially controlled the spread of coronavirus, with some even flattening the infection curve, are now struggling to control a second wave of the pandemic that seems even more severe than the first.

This comes even as experts warn of increased cases due to the Christmas and New Year festivities that will see massive travel from urban centers to rural areas for get-togethers.

The Africa Centers for Disease Control and Prevention is urging countries to adapt or adopt best practices, strategies, guidelines and recommendations proposed by the Africa CDC and the World Health Organization to limit transmission.

The health agency recommends striking a balance between saving lives and minimizing the impact of the pandemic on the economy and social wellbeing of citizens.

In his weekly virtual briefing on Thursday, Dr John Nkengasong, director of Africa CDC, urged governments to increase their surveillance ability, especially in the remote areas where the battle is expected to shift due to the festivities.

He warned failure to observe health protocols will lead to a steep increase in the number of new cases in January.

The director expressed the Africa CDC's commitment to support member states in fighting the second wave of the pandemic, as well as ensuring the continent accesses vaccines.

"We hope to get rapid access to vaccines so we can use a combination of health measures and timely massive vaccination to bring down the infection curve," Nkengasong said.

In efforts to contain the second wave of infection, especially during this festive season, South Africa, the hardest-hit country in the continent by the pandemic, on Monday announced restrictions on alcohol sales, a ban on large public events and a tighter curfew.

President Cyril Ramaphosa said the decision had been dictated by the increased cases of infections and deaths over the past week.

In that time, the country recorded a 74 percent daily average increase in new cases compared to the previous week, with the number of new cases having increased from a daily average of about 3,800 to over 6,600 a day.

Daily average coronavirus deaths also increased nearly 50 percent over the same period, from just over 100 deaths a day to over 150 deaths.

"If we do not do things differently this festive season, we will greet the new year not with joy, but with sorrow. Many of our friends, relatives and coworkers will be infected, some will get severely ill and some, tragically, will die," Ramaphosa warned.

The president said most of the new infections are among young people aged 15 to 19, attributing the massive spike to social gatherings and parties.

"In many of these gatherings, social distancing is not being observed, venues are crowded and not adequately ventilated, hand sanitizer is not readily available and people are not wearing masks," he said.

Ramaphosa said South Africa has concluded all necessary processes to ensure its participation in the WHO's COVID-19 Global Vaccine Access Facility.

"As part of this facility, it is expected South Africa will receive initial vaccines to cover 10 percent of our population in the early part of next year," he said.

In Kenya, where new cases are also high, the council of governors has been urging President Uhuru Kenyatta to issue a cessation of movement in and out of the regions believed to be coronavirus epicenters to limit spread of the virus during the festive season.

The country is currently facing a crisis because public health workers, including nurses and clinical officers, are on strike, complaining many of their colleagues are dying from coronavirus due to lack of protective gear and health insurance.

Additionally, doctors who were to begin a nationwide strike on Dec 7 postponed for 14 days to give room for negotiations with the government.

Meanwhile, in an interview with Kenya Television Network, Dr Collins Tabu, the head of immunization at the Ministry of Health, on Thursday said through the WHO-led Covax Facility, Kenya is assured of getting coronavirus vaccines to cover 10 million people.