HARARE, Sept. 14 (Xinhua) -- Foreign dignitaries including former and current African leaders on Saturday paid tribute to the late former President of Zimbabwe Robert Mugabe at a state funeral in Harare. 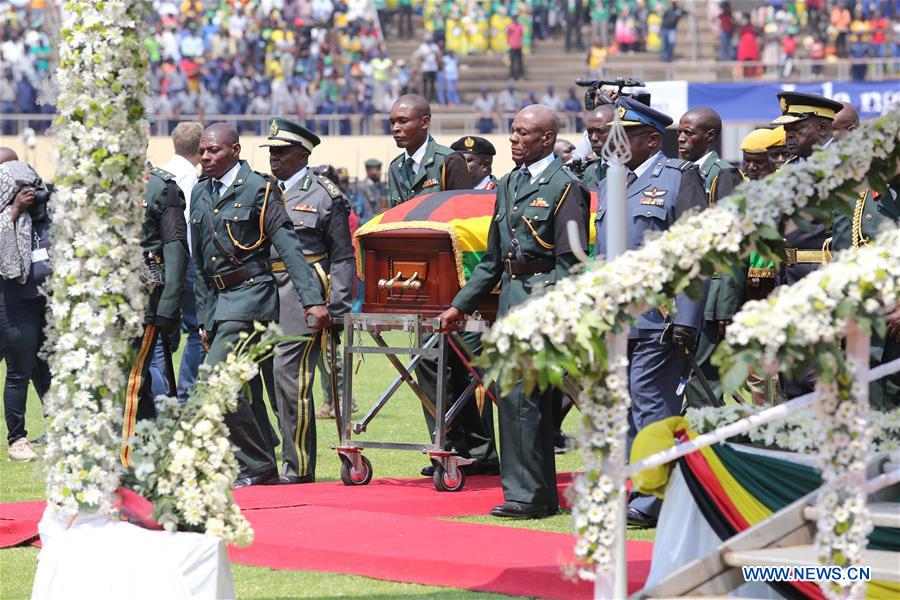 Mugabe died in Singapore last week at the age of 95. Mugabe, who ruled Zimbabwe for nearly four decades until he resigned in 2017, will be buried later at the National Heroes Acre in Harare after completion of a special mausoleum that is being built for him at the top of the shrine.

In his eulogy, Equatorial Guinea President Teodore Obiang Nguema said the whole of Africa was mourning the loss of a great fighter and a worthy combatant of Africa's causes.

Obiang was the last African leader to visit Mugabe four days before he passed on in Singapore.

Kenyan President Uhuru Kenyatta said Mugabe will be remembered as a pan-Africanist who selflessly dedicated his life to the emancipation of Zimbabwe and Africa.

"He was a visionary leader and relentless champion of African dignity. Mugabe has left an indelible mark in the history of Zimbabwe and African continent at large through his political astuteness and zeal for the economic and political liberation of Africa," Kenyatta said.

He said keeping Mugabe's dream of a truly free and prosperous Africa will be the most befitting tribute that Africa can pay to the departed African statesman.

Mugabe, Kenyatta said, was steadfast regarding Africa's quest to address challenges facing the continent and he saluted his unwavering insistence that African problems demand African solutions.

He observed that Mugabe always championed African interests first and challenged African leaders to continue doing the same as a befitting tribute to Mugabe.

Former Ghanaian President Jerry Rawlings said Mugabe was not only a teacher but an impressive moral campus.

"Our enduring affection for Mugabe is equally rooted in the strong bonds of brotherhood that derived from his growing up, studying and teaching and by marrying a Ghanaian girl," Rawlings said, referring to Mugabe's first wife Sally who was from Ghana. Sally died in Harare in 1992 and was buried at the National Heroes Acre.

Samia Suluhu, the vice president of Tanzania also paid tribute to Mugabe and described him as an icon and luminary leader.

"Today as we celebrated the life of Africa's fallen giant who gave us pride and confidence, what remains with us is to continue where he ended, his spirit, determination and sense of humor will inspire us forever," she said.

"Mugabe was a friend of the African National Congress. He stood by us during our darkest hour. Under his leadership, Zimbabwe gave us moral and material support when our people were suffering under the yoke of apartheid," he said.

He was a committed pan-Africanist, unwavering in his belief and destiny and fortunes of Africa, Ramaphosa said.

Former Namibian president Sam Nujoma said Mugabe was a great freedom fighter who made great contribution to the total liberation of Africa.

The vice president of Cuba Ines Maria Chapman said Mugabe was a historical leader of Africa who worked tirelessly for the development of close ties between Zimbabwe and Cuba.

She said under Mugabe's leadership, cooperation between Zimbabwe and Cuba grew from strength to strength, particularly in the education and medical fields where exchange programs are continuing for knowledge and expertise sharing among peoples of the two nations.

She also noted that under Mugabe's leadership, Zimbabwe continued to offer support and solidarity to Cuba in its struggle against the economic and financial blockage by the United States.

Russian ambassador to Zimbabwe also spoke at the funeral and pledged Russia's continued support to the government of President Mnangagwa in its quest to rebuild the economy under Western sanctions.