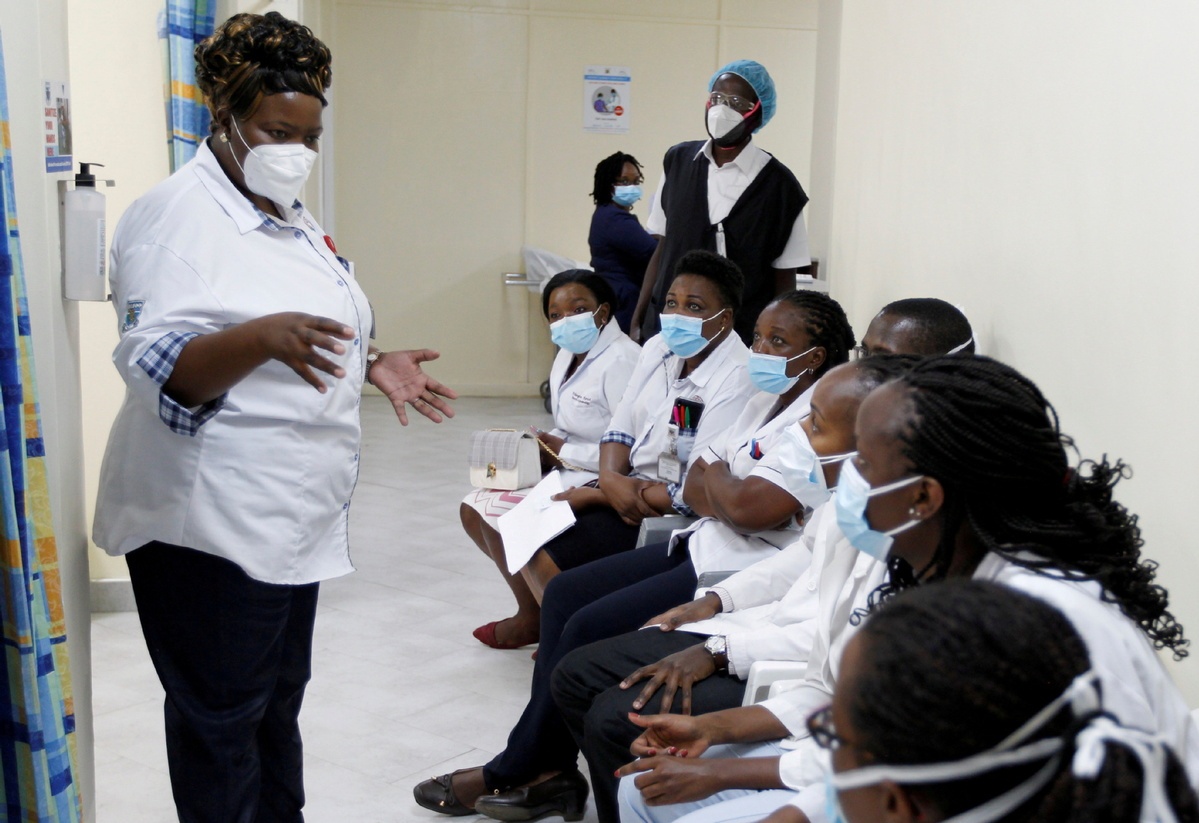 A health worker talks to her colleagues as they prepare to receive the AstraZeneca/Oxford vaccine under the COVAX scheme against COVID-19 at the Kenyatta National Hospital in Nairobi, Kenya on March 5, 2021. (Photo: Agencies)

African leaders have expressed the need for continued collaboration beyond the COVID-19 pandemic to tackle challenges facing the continent.

In separate virtual events on Tuesday, President Uhuru Kenyatta of Kenya, President Paul Kagame of Rwanda and their South African counterpart, Cyril Ramaphosa, said the pandemic had taught Africa the importance of unity.

Speaking at a Conversation with Africa webinar, part of a series of webinars, aimed at enhancing the relationship between Africa and the Caribbean, Ramaphosa said Africans should deepen collaboration to overcome poverty, inequality, under-development, disease, illiteracy, gender-based violence and conflict.

"In doing so, we are guided by the overarching objective of finding African solutions to African problems," Ramaphosa said.

He said just as Africans stood together against colonialism, apartheid and injustice, they must stand together now to overcome the coronavirus pandemic.

"Our struggle, however, is not just against a virus. It is a struggle against the deep inequalities that have severely hampered global efforts to contain the pandemic, and have left so many societies vulnerable to hardship and despair," Ramaphosa said.

"It is therefore a priority that we must confront and overcome all forms of global injustice that favour the few at the expense of the many."

Ramaphosa said the vaccine apartheid that is allowing wealthy countries to buy up vaccines while less-resourced developing countries languish in the queue must be confronted.

In a separate event, Kenyatta urged Africans to continue collaborating to ensure they build capacity locally to address challenges facing the continent.

"If we continue working together, we will enhance our capacity to handle future pandemics and crisis just as we are doing with COVID-19, and are managing to flatten the curve," he said.

Kenyatta gave the remarks at the 38th session of the New Partnership for Africa's Development heads of state and government orientation committee.

At the same event, Rwanda's Kagame said Africa remains exposed to many social economic challenges brought about by the COVID-19 pandemic.

To successfully navigate through the current times will require increased regional cooperation in addition to innovative solutions, Kagame said.

He also called on African countries to speed-up establishment of the African Medicines Agency by ratifying the treaty.

The African Medicines Agency will be established as a specialized agency of the African Union, dedicated to improving access to quality, safe and efficacious medical products in Africa.

"A strong regulatory body is central to Africa's ambitions to produce self and effective pharmaceuticals and vaccines for our people," Kagame said.

The African Medicine Agency, will enter into force once ratified by 15 AU member states. To date, the instruments of ratification have been deposited by six member states at the AU Commission.

Lack of a common legal framework among the AU member states, as well as potential conflicts of interest related to funding, have been termed as the challenges facing the establishment and effectiveness of the agency.

Meanwhile, Kenyatta said the success of the African Continental Free Trade Area that came into operation in January will depend largely on increased intra-continental connectivity enabled by infrastructure, such as roads, rail and telecommunications.

He said with proper infrastructure, intra-Africa trade will flourish through increased cross-border movement of people, goods and services.

Kenyatta urged his African counterparts to prioritize infrastructural development to enhance the continent's capacity to deal with its socio-economic challenges through trade, people-to-people interactions and sustained economic growth.

Ramaphosa on the other hand, said the free trade area that establishes a continental market of some 1.3 billion people is a major milestone towards the economic integration of the continent.

"This is the clearest affirmation that Africa is determined to take charge of its own destiny, and that its success is fundamentally tied to harnessing the potential and energies of its people, including in the diaspora," he said.

Ramaphosa said the trade area will improve the prospects of Africa as an attractive investment destination.

This is in addition to advancing the empowerment of Africa's women by improving women's access to trade opportunities, which will in turn facilitate economic freedom for women and expand the productive capacity of countries.