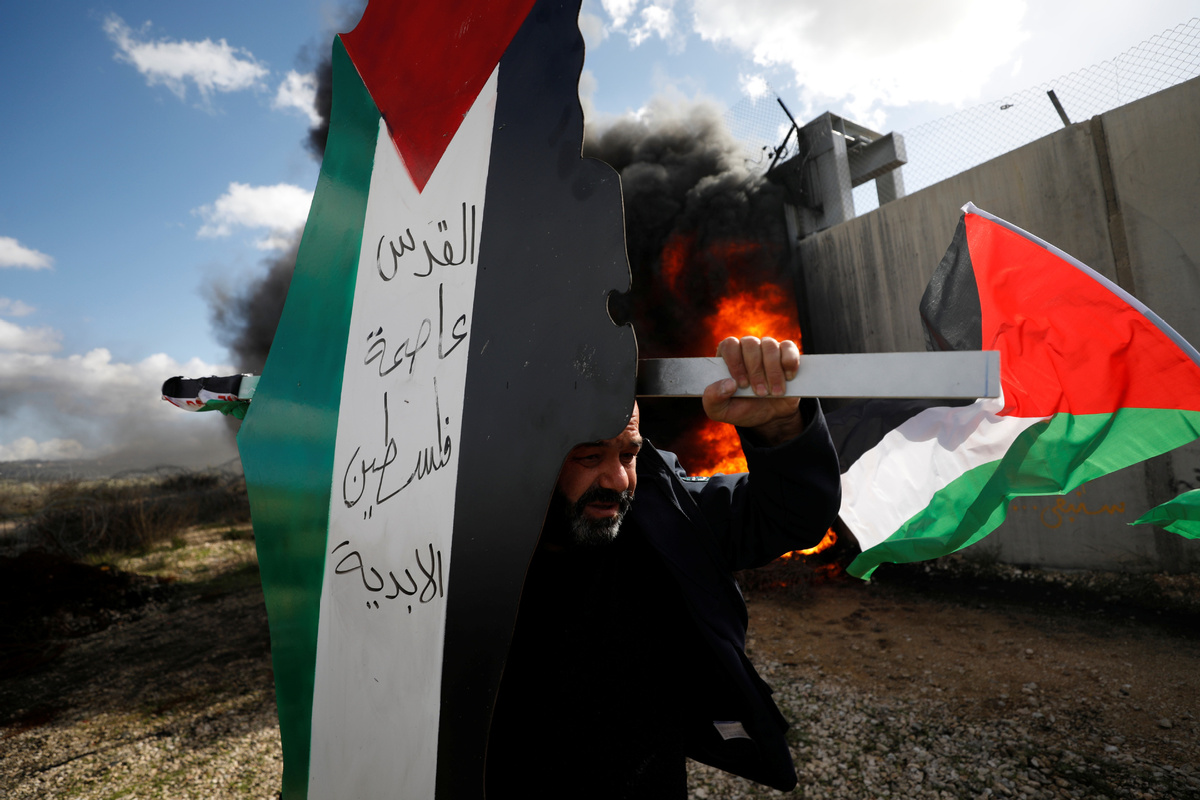 A demonstrator carries a model of a map with the colors of the Palestinian flag reading "Jerusalem is the eternal capital of Palestine" during a protest against the US President Donald Trump's Middle East peace plan, in the village of Bilin in West Bank Jan 31, 2020. (Photo: Agencies)

ADDIS ABABA - The African Union (UN) and the Arab League (AL) on Sunday voiced their rejection of the newly unveiled US peace plan that has sparked growing tensions between Palestine and Isreal.

"The case of Palestine is the most flagrant example of the fragility of the international situation. The American-Israeli plan which is called the 'deal of the century' has been prepared out of any consultations and also in the absence of those who are mainly concerned," Mahamat said at the opening of the 33rd AU summit held in the Ethiopian capital of Addis Ababa.

It violates the UN resolution and those of the AU and is trampling on the rights of the Palestinian people, he said, adding that the peace plan is heightening the tensions in the region and beyond.

US President Donald Trump on Jan 28 unveiled his controversial Middle East peace plan for the Palestinian-Israeli conflict, which would limit the sovereignty of a future Palestinian state.

He outlined the 80-page plan at the White House along with visiting Israeli Prime Minister Benjamin Netanyahu, which recognizes Jerusalem as Israel's "undivided capital," while claiming that the Palestine capital will include areas of East Jerusalem.

The plan, described by Palestinian President Mahmoud Abbas as the "slap of the century," allows Israel to claim sovereignty over certain areas of the occupied West Bank, including Israeli settlements and the Jordan Valley.

Ahmed Aboul Gheit, the AL secretary general, said "the Arab League highly and constantly appreciates the principled position of the AU in support of the Palestinian cause and the legitimate rights of the Palestinian people to end the Israeli occupation of their territory and their independent state"

"I am confident that Africa will maintain its established commitment in standing with the struggle of the Palestinian people in their rejection of this unjust deal, as was articulated by the Palestinian leadership, the Arab League, the Organization of the Islamic Cooperation and the European Union," said Aboul Gheit.

In response to the US plan, the Palestinian National Authority earlier this month informed Israel and the United States it will "cut all relations" with them.

Palestinian Prime Minister Mohammed Ishtaye who is attending the AU summit here also called on the international community to reject the peace plan.

Josep Borrell, the high representative of the European Union (EU) for foreign affairs and security policy, said last week that the US Middle East peace plan has departed from "internationally agreed parameters."

To build a just and lasting peace, the unresolved final status issues, including issues related to borders, the status of Jerusalem, security and the refugee question, must be decided through direct negotiations between both parties, Borrell said in a statement.

"In line with international law and relevant UN Security Council resolutions, the EU does not recognise Israel's sovereignty over the territories occupied since 1967. Steps towards annexation, if implemented, could not pass unchallenged," Borrell said.

Meanwhile, Palestine is seeking a position from the UN Security Council in the wake of Trump's announcement. The US peace plan intends to make illegal Israeli settlements on Palestinian land a done deal and wants to make Palestinians live under apartheid, Ishtaye said.