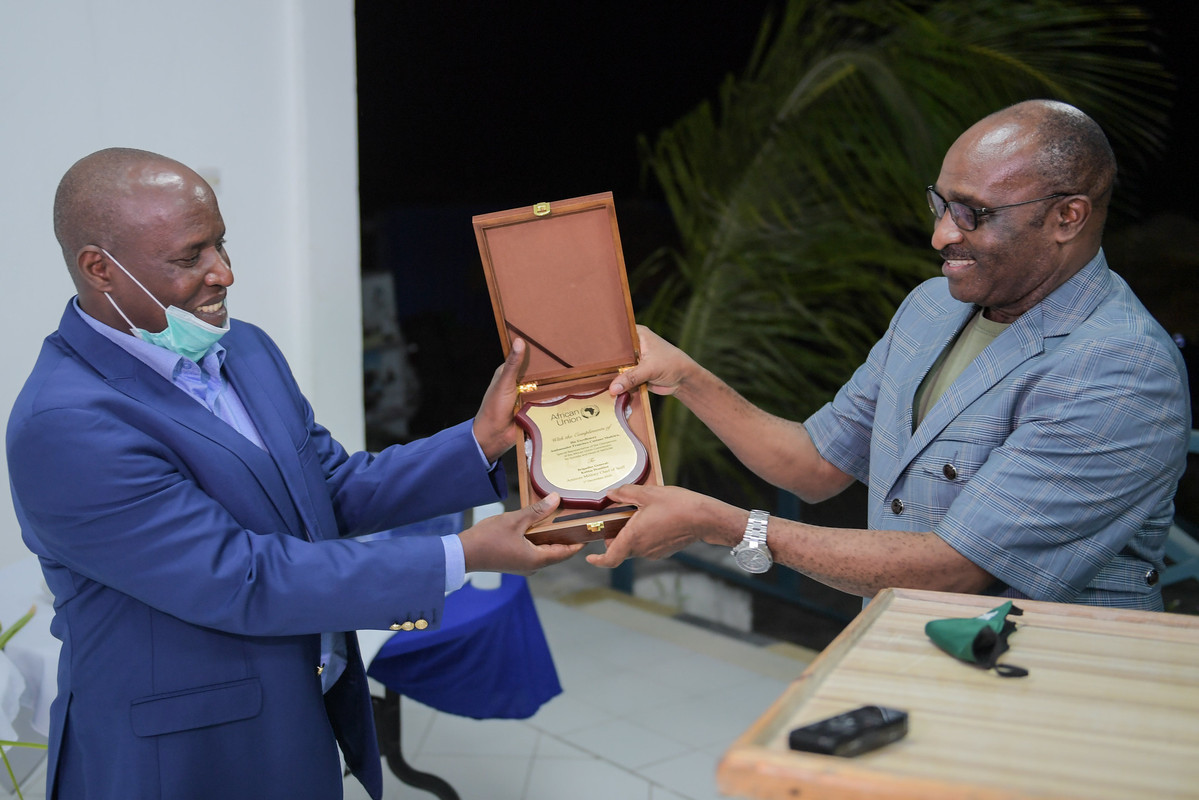 Simon Mulongo (right), the deputy special representative of the chairperson of the African Union Commission for Somalia, presents an appreciation plaque to Domitien Kabisa, the outgoing military chief of staff of the African Union Mission in Somalia, in Mogadishu, Somalia. (Photo provided to China Daily)

The African Union Mission in Somalia or AMISOM on Monday held a colorful sendoff for Domitien Kabisa, the outgoing military chief of staff, and hailed him for his enormous contribution to the peacekeeping mission.

This comes as AMISOM begins the last phase of handing over security responsibilities to the Somalia Security Forces ahead of withdrawal of its troops in December 2021 as stipulated in the UN Security Council Resolution 2520.

According to Francisco Madeira, the special representative of the chairperson of the AU Commission for Somalia and head of AMISOM, important targets that AMISOM set out to achieve as part of its Somalia exit strategy are being completed.

"The past year has seen developments on the security front and Somali security forces have proved their increased capabilities. We have seen the forces attack, win and hold ground. This is a strong signal to al-Shabab and other armed groups that their days are numbered. A professionally trained and well-equipped Somali security force is a game-changer in the fight against terror in Somalia," Madeira said.

"Our operations in Somalia are guided by the AU Peace and Security Council, as well as the United Nations Security Council. So, since December 2017, AMISOM has been reducing its troop numbers, in line with relevant UN Security Council decisions. The UN has set December 2021 as the date when AMISOM will fully exit Somalia," he added.

Kabisa, the outgoing chief of staff, hailed the AMISOM senior leadership for the guidance and advice rendered to him during his tour of duty, enabling him to discharge his duties.

"I am satisfied. I am very honored by your compliments. Thank you very much for everything that you have done for me, and particularly, the advice. It was extremely beneficial to me," Kabisa said.

Diomede Ndegeya, the AMISOM force commander, described Kabisa as a professional and industrious officer, whose vast experience in peace support operations had greatly benefited the mission.

Ndegeya noted that as the Force Headquarters focal person for the COVID-19 Task Force, Kabisa played a critical role in stemming the spread of COVID-19 among AMISOM troops, by ensuring strict compliance with the protocols, and also ably served as a stand-in force commander.

"During the temporary absence of the force commander, you assumed correctly the command and control of AMISOM military personnel by making appropriate strategic decisions. Your experience and attitude in peace operations missions could serve as a benchmark and resource for young officers," Ndegeya added.

According to Madeira, the reconfiguration means that AMISOM will either collapse some forward operating bases or hand them over to Somali security forces. Already, in Jubaland, AMISOM has handed over the Afmadow base to local security forces.

"The men and women of the AMISOM police continue to provide operational support, as well as training and mentoring, to federal and regional police. Two additional AMISOM police units and 67 individual police officers will be deployed to boost training, mentoring and support for the national elections scheduled for 2021," Madeira said.