WORLD After 3 years of acrimony, N Ireland has a government again

After 3 years of acrimony, N Ireland has a government again 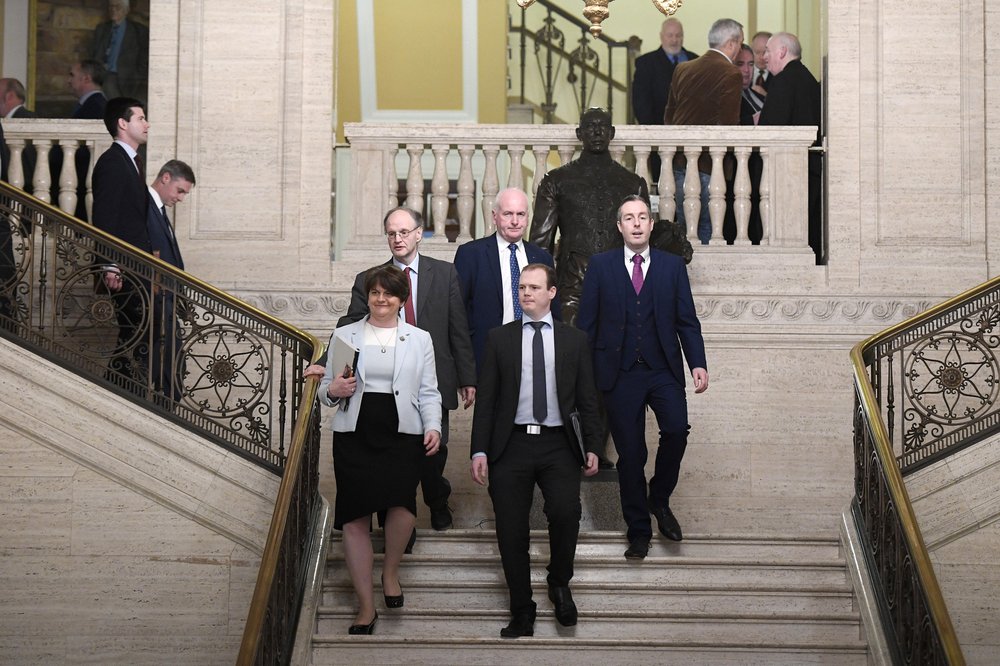 Legislators returned to Northern Ireland’s assembly Saturday for the first time in three years after a deal was struck to restore the divided region’s mothballed power-sharing government.

Lawmakers gathered at Parliament Buildings in Belfast and chose a new executive, led by the pro-British Democratic Unionist Party and the Irish nationalists Sinn Fein. Legislators picked DUP leader Arlene Foster as first minister — a post she held before the previous assembly was dissolved — with Sinn Fein’s Michelle O’Neil as deputy leader.

After three years of acrimony that left Northern Ireland with a stack of unresolved issues and a growing public-sector crisis, the parties agreed Friday to a deal brokered by the U.K. and Irish governments to revive the Belfast government.

“The parties of Northern Ireland have shown great leadership in coming together to accept this fair and balanced deal in the interests of everyone in Northern Ireland,” Johnson said.

Northern Ireland — part of the U.K. along with England, Wales and Scotland — has been without a functioning administration since the power-sharing government set up after a 1998 peace accord fell apart in January 2017 over a botched green-energy project. The rift soon widened to broader cultural and political issues separating Northern Ireland’s British unionists and its Irish nationalists, the two communities whose conflicting identities and aspirations fueled years of violence in which more than 3,000 people died.

Since 2017, Northern Ireland has been run by civil servants with limited powers to make big decisions. Major projects have been put on hold -- all in the shadow of the U.K.’s impending departure from the European Union on Jan. 31, which has serious implications for the border between Northern Ireland and the Irish Republic, an EU member.

Northern Ireland has the U.K.’s only land border with an EU member country and Brexit will challenge the status of the currently invisible frontier. That could potentially push Northern Ireland into a closer embrace with its southern neighbor, Ireland, so both the DUP and Sinn Fein want a say on what happens next.

Northern Ireland also faced a Monday deadline to restore the government or be required to hold a new election for the assembly that could see Sinn Fein and the DUP lose ground to less intransigent parties.

With that deadline looming, the parties agreed to return to government. The five-party coalition also includes the moderate nationalist SDLP, the pro-British Ulster Unionists and the cross-community Alliance Party.

Foster told lawmakers that “the time has come to move forward with resolution.”

“We have many differences,” she said of her party and Sinn Fein. “Michelle’s narrative of the past 40 years could not be more different to mine. I’m not sure we will ever agree on much about the past, but we can agree there was too much suffering, and that we cannot allow society to drift backwards and allow division to grow.”

O’Neill said all the parties would “undertake to cooperate in every way we can in order to rebuild public trust and confidence.”

“As we face into the great uncertainties of Brexit, it is imperative that we redouble our efforts to develop and rebuild a modern, competitive and sustainable economy where we open doors to trade, investment, tourism and jobs,” she said.

The long-awaited agreement addresses divisive social and cultural issues in Northern Ireland, as well as the increasingly precarious state of its public finances. It includes measures to protect the Irish language, which is important to nationalists, as well as the Ulster Scots tongue that is the heritage of British unionists.

The deal also promises U.K. government funds for big infrastructure projects and Northern Ireland’s cash-strapped public services. Northern Ireland’s health service has been has been particularly hard hit by the political vacuum, and nurses have staged a series of strikes to protest staffing shortages and eroding salaries.