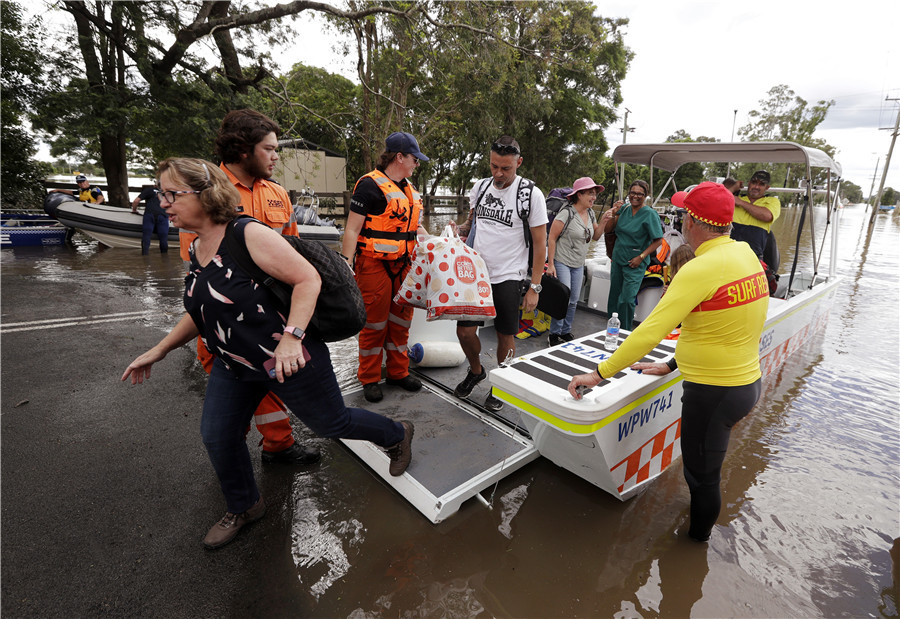 Residents disembark a rescue boat after they were carried across the flooded Hawkesbury River in Windsor, northwest of Sydney, New South Wales, on Thursday. (Photo: Agencies)

With more than 10 million people affected by flooding along Australia's east coast, people are asking themselves: Is climate change the main reason for the worst floods in more than 50 years?

The massive floods are a stark contrast from a year ago when the east coast experienced its worst bushfire season, due mainly to a prolonged drought.

Around 20,000 people remained stranded by the flooding on Thursday, with water levels yet to drop in some parts of the east coast despite an end to the rain.

"The weather systems that brought heavy rain to parts of eastern Australia have well and truly moved off into the Tasman Sea," the Bureau of Meteorology said in a statement.

While the rains may have stopped, the questions haven't as residents consider the factors behind the deluge.

Jonathan How, senior meteorologist at the Bureau of Meteorology, said parts of the state had seen record-breaking falls of 800 millimeters since March 18.

For the NSW government, one of the big concerns is for suburbs built on natural flood plains downstream of Warragamba Dam.

Elizabeth Mossop, dean of the School of Design, Architecture and Building at the University of Technology Sydney, said in a comment for Melbourne-based media network The Conversation on Monday that it is not enough to continue to build cities and towns based on "business-as-usual" planning principles anymore.

"We need to plan and design our urban spaces around the idea that flooding is inevitable... that means not building on flood plains and thinking creatively about what can be done to create urban 'sinks' to hold water when floods strike," she said.

Dorina Pojani, a senior lecturer in urban planning at the University of Queensland, said it is obvious that housing should not be built in areas prone to flooding.

"Flood maps should be taken seriously rather than in a cursory way," she told China Daily.

"It's the same with fires－some of the catastrophic damage from past bushfire seasons could have been avoided had residential construction not expanded in places which should have remained 'natural'.

"As a society, we have been very arrogant to think that we can dominate and subjugate nature without suffering any consequences."

Several scientists have said that in the future, economic mandates should not be allowed to trump environmental considerations.

Pojani added:"We need to give up our quest to fill up every bit of empty landscape and order the wilderness."

Jamie Pittock, a professor from the Fenner School of Environment and Society at the Australian National University in Canberra, said: "The impact of the floods in the Hawkesbury-Nepean valley (west of Sydney) is due to poor governance rather than any act of God.

"Extreme floods have been recorded in the valley since the earliest years of British occupation over two centuries ago. And now climate change is likely to increase the frequency of dangerous floods," he said.

"Successive state governments have failed to address the 5,000 homes built below the 1:100 year flood line.

"The NSW government's proposed 'silver bullet' solution of raising the Warragamba Dam to control floods is dangerous. International experience is that such infrastructure encourages more downstream development that is then inundated when the inevitable big flood exceeds design limits. Further, the dam will not regulate floodwaters from downstream tributaries."

The NSW government is looking at suggestions to raise the dam by 14 meters.

"The NSW government should stop plans for 134,000 people to move onto the flood plain by 2050. It should begin long-term programs to help the most flood-prone residents relocate to safe sites. Restoring the flood plain to give the river room to flood more safely can boost opportunities for agriculture, recreation and nature conservation."