WORLD After deadline, many children of migrant families still not reunited with parents

After deadline, many children of migrant families still not reunited with parents 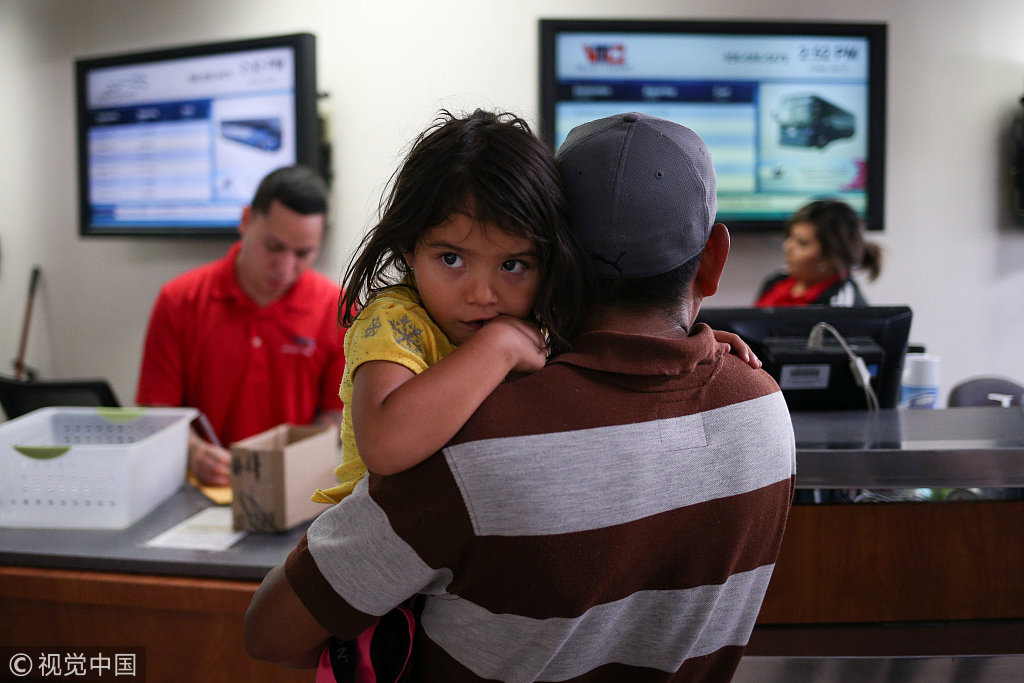 An undocumented immigrant father from El Salvador and his three-year-old daughter are released from detention with other families at a bus depot in McAllen, Texas, U.S., July 27, 2018. (Photo: VCG)

Washington (People's Daily) - Midnight Pacific time Thursday was the deadline set by a federal judge to reunite the last “eligible” migrant families separated at the US Southwest border – leaving the Trump administration scrambling to reunite more than 2,500 migrant children with their parents.

In a court filing Thursday, the government said 1,820 children ages 5 to 17 years old were eligible for reunification, or 72 percent of the total of 2,531 children. An administration official said Friday the government reunited all eligible parents with their children by the deadline.

Even if Thursday’s deadline was met, the government’s work to address the effects of the family separation policy is far from over. By June 20 when US President Donald Trump ended the “zero tolerance” policy, more than 3,000 children had been taken from their parents.

More than 700 children were not approved for reunification for reasons that included concerns about a parent’s criminal history and other safety aspects. The government also said 431 parents have been deported and officials said they would work with the courts to figure out a process to facilitate reunification.

“The overall first guiding principle is the safety of these children,” said Matt Albence, the Immigration and Customs Enforcement official in charge of jailing and removing immigrants in the country illegally.

Lee Gelernt, lead counsel for the American Civil Liberties Union, which filed a federal lawsuit challenging the family separations, said he and his organization are not happy about the government’s harsh policy or its solutions.

“The only deadline they are meeting is the one they have set for themselves,” Gelernt said. “The government should not be getting applause for cleaning up their own mess, but moreover, they’re still not meeting the deadline for all the families.”

The reunifications have unfolded in chaotic scenes across the country. Many took place in Arizona, New Mexico, and Texas, where families were funneled into federal offices designated as “staging facilities,” overwhelming local resources to the extent that some parents have had to wait days to rejoin their children.

In some cases, parents who recovered their children were dismayed by what they found. At the airport in McAllen, Texas, a migrant mother who identified herself only as Roxana, 23, was waiting to leave with her son Eduardo, 9, who had just been returned to her after being held in New York. However, the boy had a black eye and a heavy cough.

Several immigrant advocacy groups, including the American Civil Liberties Union and Kids in Need of Defense, said they remained concerned the government’s reunification efforts were not going far enough.

Gelernt said the ACLU is still waiting for information about which parents and children had been brought back together and where they were.

“The Trump administration is trying to sweep them under the rug by unilaterally picking and choosing who is eligible for reunification,” Gelernt said. “We will continue to hold the government accountable and get these families back together.”

The government quietly began separating families along the Southwest border last summer and ramped the practice up significantly in May after Attorney General Jeff Sessions announced that the Justice Department would have “zero tolerance” for illegal border crossers.