While Indonesia's neighbors scrambled early this year to try to contain the spread of the coronavirus, the government of the world's fourth most populous nation insisted that everything was fine. 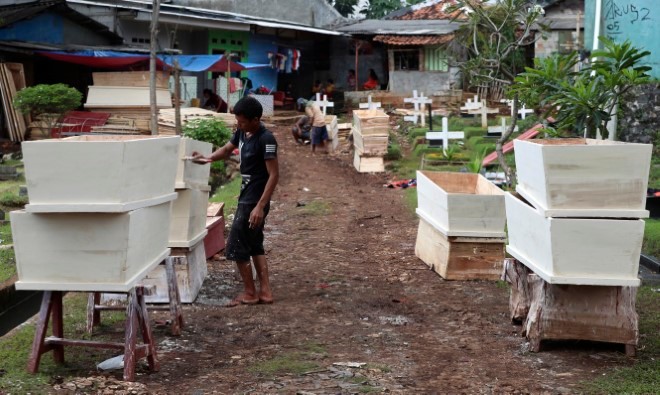 A man paints a coffin prepared for victims of the new coronavirus in Jakarta on April 14. (Photo: AP)

In speeches, Indonesia's health minister, Terawan Agus Putranto, told his country's people that they shouldn't fear the virus, even as tens of thousands around the world were being infected.

Rather than focus on creating social distancing guidelines or ramping up testing, Putranto credited Indonesian "immunity" and the strength of prayer for the country's lack of any infections. He dismissed as "insulting" a report by Harvard University researchers that said Indonesia must have elected not to report its cases.

Meanwhile, Indonesia's southern neighbor Australia and some fellow Southeast Asian countries such as Singapore were quick out of the gate to address the crisis, taking actions as early as the end of January that included containment and tracing measures.

Indonesia, on the other hand, did not even confirm its first case of the virus until early March. As of Tuesday, the nation had reported at least 7,135 infections — including 616 deaths from COVID-19, the disease caused by the virus, more fatalities than any Asian country other than China.

Indonesian President Joko Widodo acknowledged last month that the government had chosen to keep the public misinformed about the state of the coronavirus in the country.

"Indeed, we did not deliver certain information to the public because we did not want to stir panic," he said.

Suspicion over the lack of cases in Indonesia began to grow when a Chinese tourist who had traveled from Wuhan — the central Chinese city where the pandemic started late last year — to the Indonesian resort island of Bali tested positive for the coronavirus when he returned to China in early February.

Indonesian authorities, however, immediately played down the incident, with Defense Minister Muhammad Mahfud declaring, "The coronavirus does not exist in Indonesia."

Widodo, perhaps spurred by a desire for economic growth, promoted Putranto's theories, ignoring the likelihood that the vast archipelago nation had virus cases.

But there was skepticism among the public, especially after local media reported cases of Indonesian patients with pneumonia-like symptoms dying. The government's apparent lack of transparency caused many Indonesians to seek information on their own about social distancing, with some even choosing to quarantine themselves.

Pandu Riono, an epidemiology expert at the University of Indonesia, estimated that the country had cases of the virus as early as January, but that limited testing capabilities had caused them to go undetected.

The turning point came when the government announced the country's two first cases on March 2. Dozens of other infections were confirmed over the next couple of weeks, prompting Widodo's administration to finally take serious measures, including ordering nationwide social distancing and suspending all nonessential activities.

But for many, it was too little, too late.

"This outbreak affected my life worse than a tsunami," said Risti Ameliana, a resident of Jakarta, Indonesia's capital. "But falling trust in government makes it harder, as this is a global pandemic."

Bivitri Susanti, a law and political analyst from Indonesia's Jentera School of Law, said Widodo's scramble to curb the virus after a late start had caused confusion among his government ministers in issuing regulations.

"Jokowi was too slow in leading the war against this pandemic crisis," she said, using Widodo's popular nickname. "Instead, he showed his weak leadership."

On March 13, Widodo appointed the National Disaster Mitigation Agency's head, Doni Monardo, to lead the COVID-19 national task force, and allowed more labs to test for the coronavirus. He also has instructed his ministers and the task force to be transparent with the public.

But testing remains a major problem. Since the first cases were confirmed in early March, Indonesia has conducted fewer than 50,000 tests — or just 180 per 1 million people, according to government spokesman Achmad Yurianto.

At least 37 labs have been equipped so far for coronavirus testing, according to Monardo, less than half of the government's goal of having 78 labs that can conduct 10,000 tests per day.

Monardo said Indonesia is also facing shortages of essential medical supplies, including personal protective equipment for health care workers. He said the shortages have contributed to the deaths of at least 32 doctors and 12 nurses.

Widodo on Monday ordered all governors, district chiefs and mayors to intensify the tracking and isolating of people who have been exposed to the virus.

"The government cannot work alone," Widodo said at the start of a Cabinet meeting. "This is not easy for us ... but I believe that we can get through this ordeal together and come out stronger as a nation."

Early this month, Widodo declared a state of "health emergency," allowing local leaders to impose enforceable restrictions to contain the virus across the sprawling nation of more than 260 million people and 17,000 islands.

The government also has created funding options to raise 1,000 trillion rupiah ($62 billion) to finance a record stimulus package in an effort to protect the economy from recession. As of March, it had raised 24% of the financing for the fiscal shortfall through debt issuance, Finance Minister Sri Mulyani Indrawati said.

Yet worries loom over how the virus could spread in Indonesia, the world's most populous Muslim country, during Ramadan, a monthlong Islamic holiday that begins this week. Millions of people traditionally return to their hometowns to visit relatives during the holiday.

There's a chance that Indonesia "will face an explosion of coronavirus cases that could infect 1 million people after Ramadan" unless the government takes stricter measures, said Riono, the epidemiology expert.

On Tuesday, Widodo announced that the government would ban all people from returning to their hometown next month to celebrate Eid, which marks the end of the dawn-to-sunset fasting during Ramadan.

Widodo, however, has ruled out a complete lockdown of the country, citing Indonesian's cultural characteristics, its unique demography and the potential crippling economic damage. Instead, he has opted for large-scale social distancing restrictions.

That's put him at odds with Jakarta Gov. Anies Baswedan, a political rival who has been seeking tougher restrictions amid growing concerns about undetected cases in the capital and its metropolitan area, which is home to 30 million people. Jakarta has become the epicenter of the outbreak in Indonesia, confirming at least 3,260 cases as of Tuesday, including 298 deaths.

The central government finally relented to Baswedan's request for enforceable restrictions earlier this month, with several other regions of the country quickly following.