WORLD After IS fall, some women who joined plead to come home

After IS fall, some women who joined plead to come home 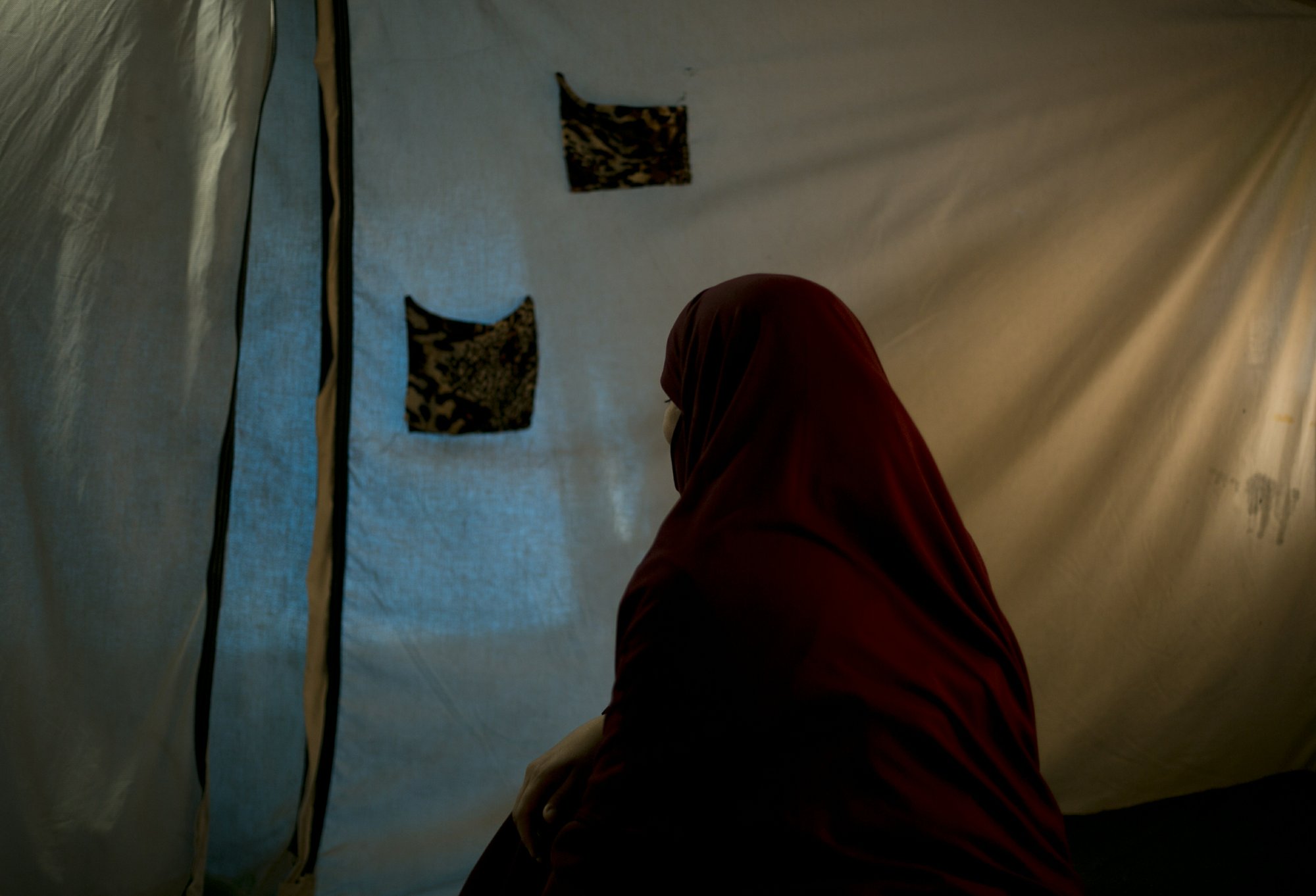 Amira, a Belgian national, poses for a portrait at Camp Roj, in north Syria. (Photo: AP)

The women say it was misguided religious faith, naivety, a search for something to believe in or youthful rebellion. Whatever it was, it led them to travel across the world to join the Islamic State group.

Now after the fall of the last stronghold of the group’s “caliphate,” they say they regret it and want to come home.

The Associated Press interviewed four foreign women who joined the caliphate and are now among tens of thousands of IS family members, mostly women and children, crammed into squalid camps in northern Syria overseen by the US-backed Kurdish-led forces who spearheaded the fight against the extremist group.

Many in the camps remain die-hard supporters of IS. Women in general were often active participants in IS’s rule. Some joined women’s branches of the “Hisba,” the religious police who brutally enforced the group’s laws. Others helped recruit more foreigners. Freed Yazidi women have spoken of cruelties inflicted by female members of the group.

Within the fences of al-Hol camp, IS supporters have tried to recreate the caliphate as much as possible. Some women have re-formed the Hisba to keep camp residents in line, according to officers from the Kurdish-led Syrian Democratic Forces guarding the camp. While the AP was there, women in all-covering black robes and veils known as niqab tried to intimidate anyone speaking to journalists; children threw stones at visitors, calling them “dogs” and “infidels.”

The four women interviewed by the AP said joining IS was a disastrous mistake. The Kurdish-led Syrian Democratic Forces gave the AP access to speak to the women at two camps under their administration.

“How could I have been so stupid, and so blind?” said Kimberly Polman, a 46-year-old Canadian woman who surrendered herself to the SDF earlier this year.

The women insisted they had not been active IS members and had no role in its atrocities, and they all said their husbands were not fighters for IS. Those denials and much in their accounts could not be independently confirmed. The interviews took place with Kurdish security guards in the room.

To many, their expressions of regret likely ring hollow, self-serving or irrelevant. Travelling to the caliphate, the women joined a group whose horrific atrocities were well known, including sex enslavement of Yazidi women, mass killings of civilians and grotesque punishments of rule-breakers, ranging from lashings, public shootings and crucifixions, to beheadings and hurling from rooftops.

Their pleas to return home point to the thorny question of what to do with the men and women who joined the caliphate and their children. Governments around the world are reluctant to take back their nationals. The SDF complains it is being forced to shoulder the burden of dealing with them.

Al-Hol is home to 73,000 people who streamed out of the Islamic State group’s last pockets, including the village of Baghouz, the final site to fall to the SDF in March. Nearly the entire population of the camp is women or children, since most men were taken for screening by the SDF to determine if they were fighters.

At the section of the camp for foreign families — kept separate from Syrians and Iraqis — women and children pressed themselves, four deep, against the chain link fencing, pleading with guards and aid workers for aid, favors and to be sent home. Many shared the same cough, and some wore surgical masks. Behind them, children played in puddles of mud, as women washed clothes in plastic tubs. Girls as young as three wore veils, while men and boys wore dishdashas, often associated with Central Asia.

Around 11,000 people are held in the foreign section of al-Hol; The Associated Press met some from South Africa, Germany, Canada, Turkey, Russia, India, Tunisia, and Trinidad and Tobago.

The women interviewed by the AP there and in Roj Camp, another site for foreign women and children, said they were deceived by IS’s promises of an ideal state ruled by Islamic law promoting justice and righteous living. Instead, they said their lives became a hell, with restrictions, punishments and imprisonment.

But in a measure of the West’s broad skepticism about these narratives, governments say they are focusing on repatriating children and not the parents, who took them to Syria.

Belgium’s current policy is to bring back child nationals under 10 years old.

“Up to today our priority remains to return these kids because they are the victims, so to speak, of the radical choices made by their parents,” said Karl Lagatie, deputy spokesman of the Belgian Ministry of Foreign Affairs.

Aliya, a 24-year-old Indonesian, said that back home she grew up in a conservative Muslim family but was not herself practicing. Then her boyfriend broke up with her and, brokenhearted, she threw herself into religion. To “make up for” her past, she said she went far to a hard-line direction, watching videos of IS sermons.

“I believed they were the real Islamic state ... They said when you make hijra (migration to the caliphate), all your sins are cleared,” she said. She spoke on condition her full name not be used for fear of drawing harassment to her family back home.

In 2015, she flew to Turkey, planning to go on to Syria. In Turkey, she married an Algerian man she met there who was also considering joining IS. But he had doubts, and suggested they move to Malaysia.

She was the one who insisted they go to the “caliphate,” she said. They settled in IS’s de facto capital, Raqqa, and soon after their son Yahya was born in February 2017.

She said it was not what they’d been promised. Their passports were confiscated, their communications monitored. She said her husband was imprisoned for a month by IS for refusing to become a fighter, then worked in the IS administration’s welfare office.

She said she was unable to escape IS territory until late 2017, when the militants gave her and her son permission to leave. Her husband had to stay behind. She has been unable to contact him for nearly a year and believes he is now in SDF hands.

Her parents are trying to convince Indonesian officials to allow her home.

“I want to tell my government I regret, and I hope for a second chance. I was young,” Aliya said. “Some people still love ISIS. Me, because I’ve lived there, I see how they are, so I’m done with them.”

Gailon Lawson, of Trinidad and Tobago, said she began to regret her decision even before she reached the “caliphate.” The night she crossed with her then 12-year-old son and her new husband into Syria in 2014, people had to dash across in the darkness to evade Turkish border guards.

“I saw people running, and that’s when I realized it was a mistake,” the 45-year-old Lawson said.

She had converted recently to Islam and married a man in Trinidad who apparently had been radicalized — becoming his second wife. Only days after they married, they travelled to Syria.

“I just followed my husband,” she said.

They divorced not long after arriving. Lawson’s biggest concern over the next years was keeping her son from being enlisted as a fighter. He was arrested three times by IS for refusing conscription, she said.

During the siege at Baghouz, she dressed her son as a woman in robes and a veil, and they slipped out. Kurdish security forces detained the son, and Lawson has not heard from him in a month.

Samira, a 31-year-old Belgian woman, said that back home when she was young, she drank alcohol and went dancing at clubs. Then “I wanted to change my life. I found Islam.” She said she came to believe IS propaganda that Europe would never accept Muslims and only in the caliphate could one be a proper member of the faith.

When she reached Syria, IS militants put her in a house for women and brought suitors for marriage. Samira chose a French citizen, Karam El-Harchaoui. She said IS imprisoned her husband for a year for refusing to become a fighter. After his release, he sold eggs and chickens.

In 2016, they tried to pay a Syrian smuggler to escape, but the smuggler pocketed the money and ratted them out to IS. Finally in January 2018, she and her husband fled with their 2-year-old child and surrendered to Kurdish-led forces. Her husband was imprisoned and has since been sent to Iraq to stand trial there.

“I know he will not have a fair trial,” Samira said. Iraqi courts are notorious for cursory trials of suspected IS members in which almost no evidence is presented.

Meanwhile, she is trying to get home to Belgium. “What we saw with Daesh was a lesson to us and allowed us to gain perspective on the extremists. All we want is to reintegrate in our society,” she said, using an Arabic acronym for IS.

“I hate them,” she said of the group. “They sold us a dream, but it was an open prison. They kill innocent people. All that they do, these things, it’s not from Islam.”

Lagatie, the Belgian Foreign Ministry spokesman, said his government would not comment on individual cases, but said Samira was “well known to Belgian authorities.”

Polman, the Canadian woman, came to the caliphate to join her new husband, a man she knew only from online. One of her siblings in Canada, contacted by the AP, confirmed this part of her story. Soon after they were united in Syria, the husband became abusive and they divorced.

She married again and worked in a hospital, treating children wounded in the fighting.

“I saw an incredible number of children die,” she said. She recounted mopping up blood on the hospital floor and breaking down after failing to revive a dying 4-month-old. Polman said she came to blame the militants for the horrors she saw.

“Why would the rest of the world be responding to this if you were any kind of normal human being? Why? ...You can say this is about religion but I don’t buy it,” she said, referring to other IS supporters who often accuse the world of ganging up against the group because it is Muslim.

In early 2019, she and her husband surrendered to the SDF.

She wants to return to Canada, saying she is not safe in the camp because she has spoken out against IS.

“I feel so badly that I think I don’t deserve a future. I shouldn’t have trusted.”