Still reeling from a deadly port blast that ravaged their Beirut homes and businesses, Lebanese wearily braced themselves for a new coronavirus lockdown due to start on Friday. 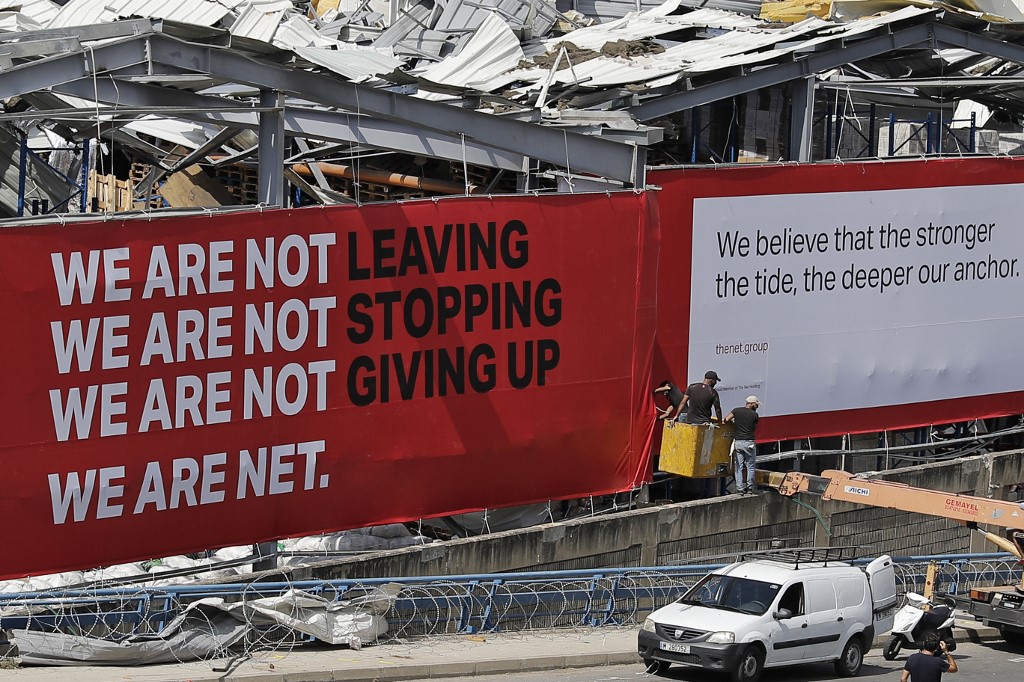 Workers hang banners on the facade of warehouses that were destroyed by a cataclysmic explosion at the port of Beirut, on August 19, 2020. (Photo: AFP)

"What now? On top of this disaster, a coronavirus catastrophe?" said 55-year-old Roxane Moukarzel, as she waved towards the devastated port from the balcony of her gutted home.

Lebanon is to partially close down for two weeks from Friday to stem a string of record daily infection rates that have brought the number of COVID-19 cases to 10,952, including 113 deaths.

Moukarzel said she supported the decision, especially after the massive blast at Beirut's port on August 4 that killed 181 people, wounded thousands and laid waste to windows and doors across swathes of the city.

"Economically closing up the country is not good, as people want to sell, but let them lose out a little instead of getting sick and having to be carted off to hospital," said the mother of one, who trained as an architect.

"There's no more space in the hospitals. If people suddenly start burning up, where will they put them?"

Authorities fear Lebanon's fragile health sector would struggle to cope with a further spike in COVID-19 cases, especially after some hospitals near the port were damaged in the explosion.

They have said the new lockdown measures, which include a nighttime curfew from 6:00am (0300 GMT) to 6:00pm (1500 GMT), will not affect the clean-up or aid effort in areas ravaged by the blast.

The stay-at-home order from Friday is only the latest such decision after a months-long lockdown from mid-March.

It came on the heels of a dire economic crisis since last year that has trapped people's savings in banks, sent food prices soaring and caused tens of thousands to lose their jobs or a large part of their income.

Even before the explosion of a huge stockpile of ammonium nitrate at the port sparked popular rage against official negligence, Lebabon's crisis had doubled poverty rates to more than half of the population, according to UN estimates.

Sitting inside his carpenter's shop in a Beirut neighbourhood inland from the port, Qassem Jaber said he did not see how a further lockdown was helpful after months of slow business and an explosion that blew away his workshop's shutter.

"There's no work. People have no more money. They have nothing to eat," he said, determined to keep his business open to help people rebuild their homes.

"What's coronavirus got to do with it? We all get better and then it's fine," the 75-year-old added.

But the Shiite Muslim carpenter did welcome a call from the Hezbollah movement for followers to avoid large gatherings and instead commemorate the religious event of Ashura at home this year.

The occasion, which marks the seventh-century killing of Imam Hussein in battle by the forces of Caliph Yazid and usually draws thousands of Shiite Muslims into the streets, also falls on Friday.

But Hezbollah leader Hassan Nasrallah has urged followers to suspend the usual public display of grief, due to the alarming spread of the coronavirus.

"The situation has become out of control, there are many cases, and the hospitals are no longer able to cope," Nasrallah said on Monday, urging people instead to hoist black flags outside their homes and shops to mark the religious event.

Jaber said he thought the decision was wise: "They cancelled Ashura so no one gets infected."