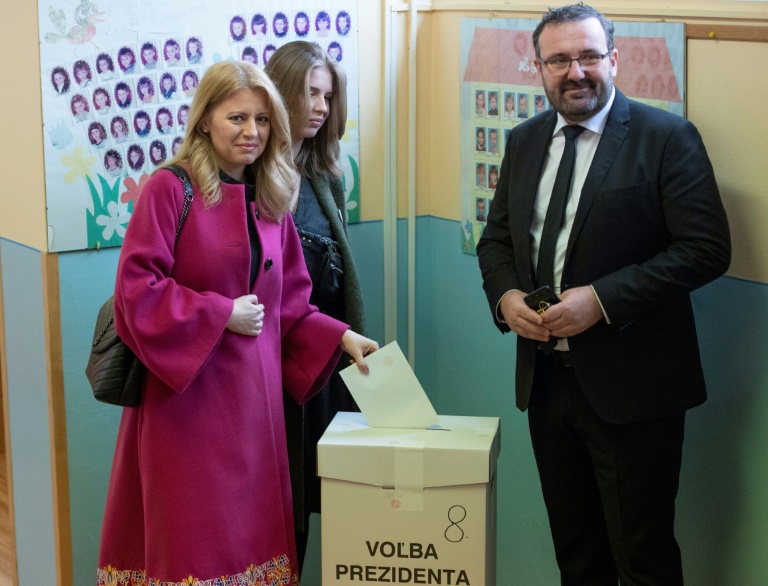 Presidential candidate Zuzana Caputova, seen here casting her vote, has campaigned under the slogan: "Stand up against evil, together we can do it".(Photo: AFP)

Slovaks voted Saturday in round one of a ballot that could usher in their first female president, a vocal government critic who emerged as the clear favourite after an investigative journalist's murder dealt a blow to the political establishment.

Zuzana Caputova, 45, was among tens of thousands of protesters who took to the streets after the killing which shocked the country and raised fears about media freedom and political corruption.

They were the largest anti-government protests since communist times in this central European country of 5.4 million people, which spent decades behind the Iron Curtain before joining the European Union, the eurozone and NATO.

Opinion polls give the environmental lawyer a double-digit lead over European Commission vice-president Maros Sefcovic, a 52-year-old career diplomat backed by the ruling Smer-SD party, in the race for the largely ceremonial post.

"Caputova attracts those who abhor corruption and are dissatisfied with what they see as an increasingly... self-dealing government," said Kevin Deegan-Krause, a central Europe expert at Wayne State University.

"Sefcovic appeals to those with a certain satisfaction with the progress of a country which, by many indicators, has not done at all badly over the last decade."

With neither candidate on track to win the required 50 percent for outright victory in the first round, a run-off is expected on March 30.

Caputova, a deputy head of the non-parliamentary Progressive Slovakia party, cast her ballot in her southern city of Pezinok.

"Slovakia is at a crossroads in terms of regaining the public's trust," she said, flanked by her daughters and her partner.

Journalist Jan Kuciak and his fiancee were gunned down in February 2018 just as he was about to publish a story on alleged ties between Slovak politicians and the Italian mafia.

Then prime minister Robert Fico was forced to resign but remains the leader of the populist-left Smer-SD and is a close ally of current premier Peter Pellegrini.

Four people were charged with the killings.

On Thursday, prosecutors said they had also charged multi-millionaire businessman Marian Kocner with ordering the murder of Kuciak, who had been investigating his business activities at the time.

Kocner is believed to have ties to Smer-SD.

"With this announcement, the authorities may have wanted to show just how effectively the state functions so it could help Sefcovic gain some points," Bratislava-based analyst Grigorij Meseznikov told AFP.

"On the other hand, this could also be a vindication for Caputova, as she is the symbol of change."

Caputova won a vote from outgoing President Andrej Kiska on Saturday. "It is extremely important to continue this fight for a decent and fair Slovakia," he told reporters.

She has appealed to voters tired of the country's main political players and vowed to restore public trust in the state, running on a slogan of: "Stand up to evil".

On the streets of Bratislava, several voters said they were impressed by her fresh approach.

Project manager Nora Bajnokova said she backed Caputova because "she is a woman, a mother, a lawyer and not involved in active politics".

"You just don't get the sense that she's lying," the 33-year-old told AFP.

But 41-year-old security guard Oto said only Sefcovic was "serious" enough to be president material.

Campaigning on the slogan "Always for Slovakia", Sefcovic has promised greater social benefits for the elderly and young families.

A European Commission vice-president since 2014, Sefcovic is known for his toothy smile and love of sports.

After voting, he told reporters he would "have lunch with my family and in the afternoon, I want to do some physical activity".

Though an independent, Sefcovic has the backing of Smer-SD, which guarantees him some voters but disqualifies him in the eyes of others.

"I wouldn't vote for anyone who supports Fico or is supported by Smer," said Maria, a biology student from the western town of Piestany.

The president ratifies international treaties, appoints top judges, is the commander-in-chief of the armed forces and can also veto laws passed by parliament.