After rise in Iowa polls, Buttigieg in spotlight at U.S. Democratic presidential debate

Democratic White House contenders united in backing the impeachment inquiry of Republican President Donald Trump on Wednesday, but differed over imposing new taxes on the wealthy and how to expand healthcare coverage for Americans.

At the fifth debate in the Democratic race to pick a challenger to Trump in the November 2020 election, candidates said the president's efforts to press Ukraine to investigate former vice president Joe Biden were an example of the administration's corruption.

"We have to establish the principle that no one is above the law, we have a constitutional responsibility and we need to meet it," said U.S. Senator Elizabeth Warren, an early supporter of Trump's impeachment.

The Democratic-led House of Representatives has launched an impeachment inquiry into Trump's bid to get Ukraine to investigate Biden and his son Hunter, who served on the board of Ukrainian gas company Burisma.

The candidates said Trump had forced lawmakers to hold him accountable.

"The constitutional process of impeachment should be beyond politics and it's not part of the campaign. But the president's conduct is," said Pete Buttigieg, mayor of South Bend, Indiana.

Biden said as president he would leave it to the Department of Justice to decide whether Trump should be prosecuted for his actions.

"If that was the judgment, that he violated the law, and he should be in fact criminally prosecuted, then so be it. But I would not direct it, and I don't think it's a good idea that we mock, that we model ourselves after Trump and say: 'Lock him up,'" he said.

The Democratic debate comes just 11 weeks before the first nominating contest in Iowa, on February 3, raising the stakes for the 10 participants hoping for a chance to make an impression with voters before time runs out.

The Democratic White House race has featured a three-way battle at the top of recent national polls between moderate Biden and progressive leaders Warren and U.S. Senator Bernie Sanders.

However, Buttigieg has taken the lead in two recent polls in Iowa and is on the move in early voting in New Hampshire despite questions about his relative lack of experience and his inability to make inroads with African-American voters.

Warren has seen some of her momentum fade after coming under fire in the last debate from rivals who questioned how she would pay for her government-run "Medicare for All" plan, which would eliminate private health insurance, without raising taxes on the middle class. 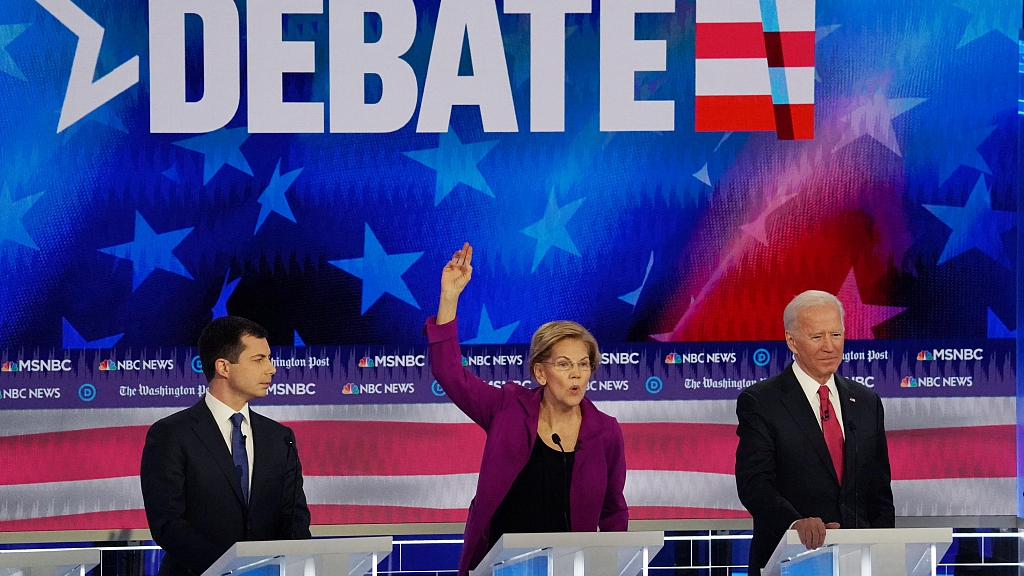 Billionaire former New York mayor Michael Bloomberg put his name on Democratic primary ballots in Texas on Wednesday, paving the way for a possible late entry into the presidential race.

Bloomberg, 77, has not officially said whether he will run in the 2020 race, but has acknowledged considering a bid.

His would-be opponents in a historically large Democratic field have spent months making their case to voters in states, starting with Iowa and New Hampshire, that will start selecting the party's nominee in February.

Bloomberg would bypass some of those earlier voting states and start campaigning in time for Super Tuesday, on March 3, when voters in 15 states and other regions select their nominee. His possible rivals Joe Biden and senators Elizabeth Warren and Bernie Sanders.