WORLD Against backdrop of controversy, Red Sox honored by Trump

Against backdrop of controversy, Red Sox honored by Trump

US President Donald Trump honored the World Series champion Boston Red Sox — well, some of them — at the White House on Thursday, but made no mention of the controversy that shadowed the visit. 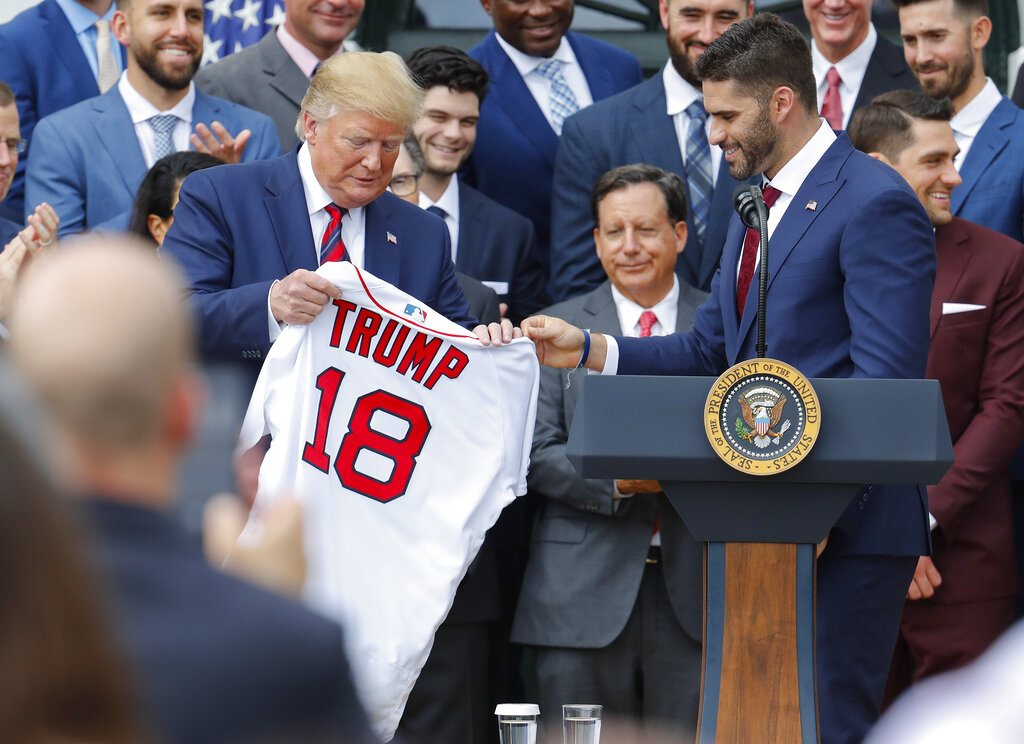 Outfielder J.D. Martinez, right, presents a team jersey to US President Donald Trump, left, during a ceremony on the South Lawn of the White House in Washington, Thursday, May 9, 2019, where Trump honored the 2018 World Series Baseball Champion Boston Red Sox. (Photo: AP)

The team's manager, Alex Cora, did not attend the ceremony after citing his frustration with the administration's efforts to help his native Puerto Rico recover from a devastating hurricane. And nearly a dozen members of the team, all players of color, skipped the opportunity to shake Trump's hand. Meanwhile, every white player on the team — as well as outfielder J.D. Martinez, who is of Cuban descent — attended.

The Red Sox repeatedly denied there was any sort of racial divide caused by the White House visit, which has been transformed from moment of celebratory ritual to hyper-politicized event under Trump. And there was no sign of discord during the rained-upon ceremony on the White House South Lawn.

The US Marine Corps band played versions of "Dirty Water" and "Sweet Caroline," two unofficial Red Sox anthems. A derogatory shout about Boston's rival, the New York Yankees, was heard. Trump was presented with a Red Sox jersey with No. 18 on the back.

The day was not without mishaps: The White House first incorrectly labeled the team as the "Red Socks" on its website and then later, in an email, dubbed them the champions of something called the "World Cup Series." But Trump himself stuck to the correct script, honoring the team's dominant run to the title.

"Frankly, they were unstoppable. I watched," said Trump, who noted that the squad had now won more World Series titles than any other franchise this century. He laughed when Martinez teased him for being a Yankees fan.

The president was accompanied by two of the team's stars, Martinez and pitcher Chris Sale, from the Oval Office and joined the rest of the team assembled under the South Portico. The team's third base coach, Carlos Febles, who is from the Dominican Republic, stood two rows behind the president. And dozens of administration officials and members of government, many of whom hail from the six New England states, stood on the lawn to cheer.

Tom Werner, the team's chairman, downplayed the no-shows, saying it was each player's personal decision whether to attend.

"We don't see it as a racial divide," he said after the team received a post-ceremony tour of the Lincoln Bedroom. "I think, to the extent that we can, baseball is apolitical."

A championship team's coach rarely, if ever, misses the White House visit, a tradition that began in earnest in 1924 when then-President Calvin Coolidge invited the Washington Senators. Cora had considered attending Thursday's White House event to call attention to the plight of those in Puerto Rico, where Hurricane Maria is estimated to have caused nearly 3,000 deaths. But in the end, he opted not to go.

"Unfortunately, we are still struggling, still fighting," Cora said in a statement. "Some people still lack basic necessities, others remain without electricity and many homes and schools are in pretty bad shape almost a year and a half after Hurricane Maria struck. I've used my voice on many occasions so that Puerto Ricans are not forgotten, and my absence is no different. As such, at this moment, I don't feel comfortable celebrating in the White House."

Before the visit, Trump defended his stance on Puerto Rico, falsely asserting once again that the territory received $91 billion in hurricane relief money, which he claimed was "the largest amount of money ever given to any state."

In fact, Congress has allocated Puerto Rico just a fraction of that figure. The White House has said Trump's $91 billion estimate includes about $50 billion in speculated future disaster disbursements that could span decades, along with $41 billion already approved. Actual aid to Puerto Rico has flowed more slowly from federal coffers, with about $11 billion given so far. Hurricane Katrina in 2005 cost the US government more than $120 billion — the bulk of it going to Louisiana.

Those around the Red Sox locker room stressed that a player's decision to attend was a personal choice and not, in many cases, political.

"Politically, it didn't matter who was in the White House. If I have an opportunity to go to the White House and meet the president, I'm going to go," relief pitcher Heath Hembree said Wednesday. "Nobody tried to persuade me. They have their reasons why not to go."

For some players, it may be their only chance for a White House invite. It also reflects a larger trend across baseball: A number of players hail from Trump-friendly states like Texas and Florida, while the sport has also seen a surge in Latino players and a decline in African Americans.

Having also won World Series titles in 2004, 2007 and 2013, the Red Sox — who also visited wounded veterans at Walter Reed National Military Medical Center on Thursday — have been honored at the White House under both Republican and Democratic presidents. But the events have taken on sharp political overtones since Trump took office.

When the New England Patriots visited in 2017, Trump's first year in office, far fewer players attended than when the franchise won a title under President Barack Obama. After several players on the Philadelphia Eagles and Golden State Warriors publicly declared that they would skip White House ceremonies, Trump disinvited the teams. Trump has also instituted a new tradition for the ceremonies, scrapping gourmet meals in favor of offering plates of fast food to the athletes. The Red Sox were not at the White House for a meal, Werner said.

Moreover, the optics of the Red Sox visit are certain to receive additional scrutiny due to the history of racially charged moments for both the team and the city it calls home.

The Red Sox, infamously, held a failed tryout for Jackie Robinson before he broke the sport's color barrier. They were the last team in the major leagues to integrate. And an Elks Club in the team's former spring training home of Winter Haven, Florida, invited only white players to events, a practice that stopped only in the 1980s, when black players complained.