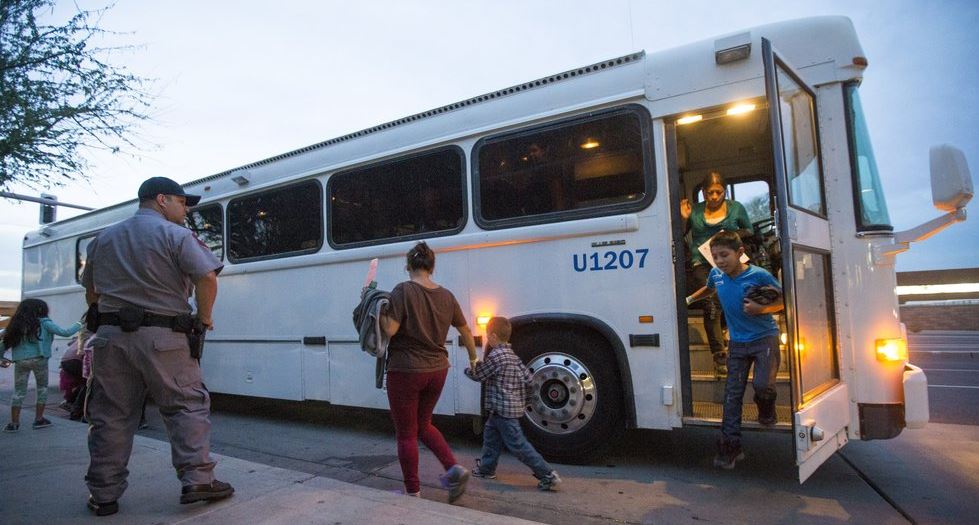 Migrants are released from ICE custody at a Greyhound bus station in Phoenix in 2014. (File photo: AP)

A Customs and Border Protection memo obtained by The Associated Press confirms that bus companies such as Greyhound do not have to allow Border Patrol agents on board to conduct routine checks for illegal immigrants, which is contrary to the company’s long insistence that it has no choice but to do so.

Greyhound, the nation’s largest bus carrier, has said it does not like the agents coming on board, but it has nevertheless permitted them to do so, claiming federal law demanded it. When provided with the memo by the AP, the company declined to say whether it would change that practice.

They say the practice is intimidating and discriminatory and has become more common under President Donald Trump. Border Patrol arrests videotaped by other passengers have sparked criticism, and Greyhound faces a lawsuit in California alleging that it violated consumer protection laws by facilitating raids.

The memo obtained by the AP was dated Jan. 28, addressed to all chief patrol agents and signed by then-Border Patrol Chief Carla Provost just before she retired. It confirms the legal position that Greyhound’s critics have taken: that the Constitution’s Fourth Amendment prevents agents from boarding buses and questioning passengers without a warrant or the consent of the company.

“When transportation checks occur on a bus at non-checkpoint locations, the agent must demonstrate that he or she gained access to the bus with the consent of the company’s owner or one of the company’s employees,” the memo states. An agent’s actions while on the bus “would not cause a reasonable person to believe that he or she is unable to terminate the encounter with the agent.”

Border Patrol officials have previously said agents do seek the consent of the bus driver before boarding and questioning passengers. Bill Kingsford, the operations officer for the Border Patrol’s Spokane, Washington, sector, said Thursday that before the memo he had never seen that policy in writing.

In response to criticism over the past two years, Greyhound has said that it does not support or “consent” to the bus searches, but that federal law left it no choice. The company said the immigration sweeps make for delays, missed buses and unhappy customers.

Greyhound’s parent company, FirstGroup PLC, said last summer: “We are required by federal law to comply with the requests of federal agents. To suggest we have lawful choice in the matter is tendentious and false.”

Greyhound said that it appreciated the Border Patrol “clarifying” its policy. “We were unaware of USBP’s memo clarifying their practices regarding transportation and bus check operations,” the company said. “We are pleased there appears to be greater context about these practices as we have publicly stated we do not consent to these searches and maintain that position.”

The statement said it would continue to request guidance from the Border Patrol. “Our goal is to ensure that our passengers and drivers feel safe and secure when riding with us, and we’ll continue to make that our top priority.”