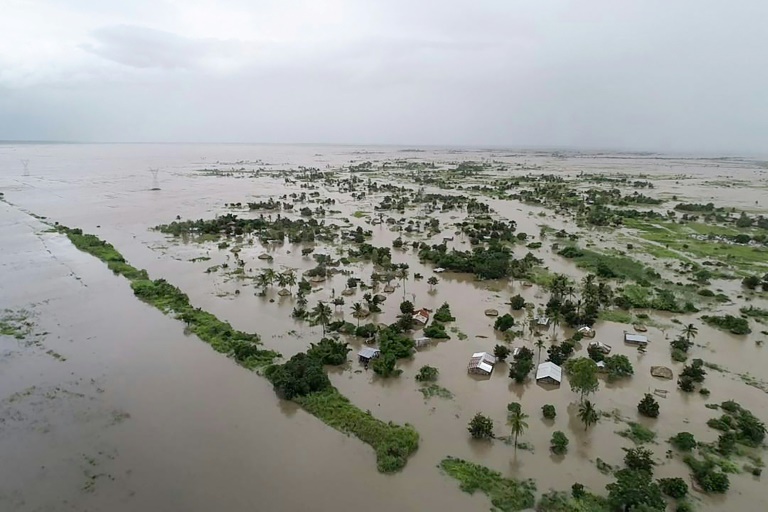 Flood zone: The land west of the city of Beira has been turned almost into an inland sea. (Photo: AFP)

Aid workers raced on Wednesday to help survivors and meet spiralling humanitarian needs in three poor countries battered by one of the worst storms to hit southern Africa in decades.

Five days after tropical cyclone Idai cut a swathe through Mozambique, Zimbabwe and Malawi, the confirmed death toll stood at more than 300 and hundreds of thousands of lives were at risk, officials said.

Mozambique, where the monster storm made landfall early last Friday, is reeling.

"We’ve thousands of people... in roofs and trees waiting for rescue," Caroline Haga, spokeswoman for the International Federation of Red Cross and Red Crescent Societies, said.

"We are running out of time. People have been waiting for rescue for more than three days now," she told AFP in the storm-ravaged coastal city of Beira.

"Yesterday we rescued some 167 people from trees and roofs. Today we’ll continue that. Unfortunately we can’t pick up all the people, so our priority are children, pregnant women, injured people."

In the Buzi district of Beira, scores of survivors stood perilously on a church rooftop and on terraces of a basketball pitch, surrounded by dirty brown flood waters. Some turned to harvesting rainfall rather than have to drink the mucky waters around them.

Mozambican President Filipe Nyusi on Tuesday said 202 people had died, according to the latest toll, and nearly 350,000 people were risk.

In Zimbabwe, the death toll stood at 100 on Wednesday but was expected to surge to 300, while up to 15,000 people are estimated to have been hit by the storm.

In Malawi, nearly a million people have been affected and more than 80,000 forced from their homes, according to the UN.

Aid agencies said they were prepared for the cyclone which made landfall early Friday, but not for the massive floods that followed.

Mozambique bore the brunt from rivers that flow downstream from its neighbours.

"No one was prepared for the floods. The cyclone caused torrential rains in Zimbabwe and Malawi and all the water came here," said Haga.

"Two rivers have overflown and there is flooding, we have several metres (10 feet) of high water," said Haga.

Beira airport which was partially damaged by the storm and temporarily shut, had reopened to become the relief operations hub but is proving not large enough.

Air force personnel from Mozambique and South Africa have been drafted in to fly rescue missions and distribute aid which can only be airlifted as roads out of Beira have been destroyed.

The UN World Food Programme (WFP) started dispatched more than five tonnes of emergency provisions to the affected areas, but warned the world had yet to appreciate the scale of the "massive disaster".

It is targeting some 600,000 people "in the coming weeks," spokesman Herve Verhoosel said .

"I don't think that the world (has) realised yet the scale of the problem."

A government worker who asked not be identified spoke from a roadside after he was rescued by boat in Nhamatanda, some 60 kilometres (40 miles) northwest of Beira, saying "this is the first time our generation has seen something like this".

In Zimbabwe, at least 217 people are listed as missing in Chimanimani in Manicaland, an eastern province which borders Mozambique.

The district remains cut off after roads were swallowed by massive sinkholes and bridges were ripped to pieces by flash floods, leaving a landscape that Defence Minister Perrance Shiri said "resembles the aftermath of a full-scale war".

Families were using hoes to dig through mounds of soil in search of their missing relatives, an AFP correspondent saw.

After visiting some of the victims in Chimanimani, Zimbabwean President Emmerson Mnangagwa said "a tragedy has visited us".

"The last place we visited, where three main rivers merge, an entire village was washed away. I think those are the bodies which are now being found in Mozambique," he said.

The three countries are some of the poorest in the region and depend heavily on foreign aid.

In Rome, Pope Francis expressed "my pain and my closeness" for those caught up in the disaster.

"I entrust the many victims and their families to the mercy of God and I implore comfort and support for those affected by this calamity," he said, addressing thousands of pilgrims in St. Peter's Square.