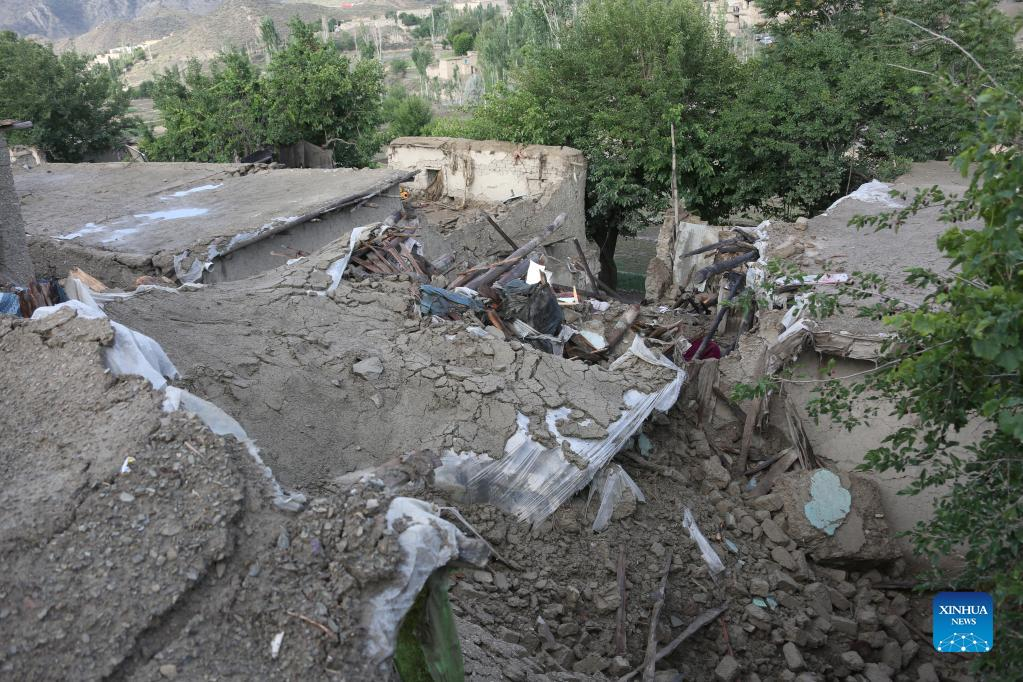 GAYAN, Afghanistan, June 24 (Xinhua) -- At least five people were killed and 11 others wounded in an aftershock hitting eastern Afghanistan on Friday as humanitarian aid continued to flow into areas affected by a 5.9-magnitude earthquake two days earlier.

The earthquake on Wednesday left over 1,000 people dead and more than 1,500 others injured in the Paktika and neighboring Khost provinces.

"We are terrified by many aftershocks. We are praying for an end to this calamity. All villagers, women and children are panicking," Qari Shakir, a survivor in Gayan district from Wednesday's earthquake, told Xinhua on Friday.

"Unfortunately, once again an earthquake hit Gayan district of Paktika province roughly at 10 a.m. local time Friday (0530 GMT), and based on the initial information, five people were martyred and 11 others wounded," the Ministry of Public Health said on the social media platform Twitter.

Shakir said he has felt several aftershocks after Wednesday's quake, the deadliest in 20 years in Afghanistan.

"Early Friday morning I felt one but it was not strong, the second one occurred roughly at 10 a.m.. I saw a lot of stones sliding from mountains around our village when the ground was shaking by aftershocks," he said.

Victims of the earthquake living in remote districts bordering Pakistan had a miserable life during two decades of the U.S.-led war in Afghanistan, Shakir said.

"They were very poor, they had no livelihood even before the destruction of the earthquake. These areas were the worst affected by the 20 years of wars," without clinics, schools and roads, he said.

Life-saving items and other supplies of humanitarian assistance were flowing into a mountainous region despite the tough terrain, Khalil-ur-Rahman Haqqani, acting minister for refugees and repatriation affairs of the Taliban-led caretaker government, told Xinhua on Thursday.

All government agencies and domestic and international non-governmental organizations have been working together to respond to the natural disaster, he said.

The minister urged humanitarian assistance from the international community. "We reach out to all countries in the world," he said.

"Cash money has also reached, every injured person will receive 50,000 afghani (1 Afghani equals 0.011 U.S. dollar), and for families who lost their loved ones, 100,000 afghani will be distributed. People whose houses are destroyed will be supported and all of them will receive assistance, as the assistance supplies are flowing in and will be sent to all affected people," Haqqani added.

On Thursday, 15 trucks loaded with life-saving items and food aid were dispatched from a local airport in eastern Khost province to Paktika after Acting Minister of Interior Khalifa Sirajuddin Haqqani demanded the delivery of humanitarian aid at the earliest time.

The minister also traveled to the quake-affected region Friday and met with the injured people in Paktika and Khost provinces. He asked hospital officials to treat the injured by all possible means and transfer them to Kabul," the ministry said on social media.

"The (Wednesday's) earthquake rattled two times. The first shock was not so strong. The second quake was strong. It was very strong, and the second shock destroyed our homes," a Gayan resident, Yasin Jan, told Xinhua on Thursday.

"From my family and relatives 12 people have died. They included my two brothers, my father, my nephews and nieces, my wife, my three kids, my brother's wife and kids," Jan said.

"We received some assistance supplies so far...we need much for foodstuff," he said. "We demand the government's help as a lot of people now have no caretaker. We do not have access to daily necessities anymore."

"We need food, we need clothes, we also need support for rebuilding our homes, all of our belongings and home appliances are under the debris now," Jan added.

Mawlawi Hamid Shah, another resident from Gayan who lost two dozens of his family members and close relatives, told Xinhua that villagers have given up searching for their loved ones as they believed no people could be alive now under the debris.

"We are shocked by the heavy loss of lives. We do not know how to manage and deal with this catastrophe," he said.

"We have buried 30 bodies. My brothers, cousins, nephews among my relatives have died," he said.

According to him, there were 30 houses in the community he lived, and at least four families were living in each house. "All the houses were destroyed. We are thankful to the government as it shifted all our wounded from the area to hospitals."

Earlier on Friday, several cargo planes from the United Arab Emirates and Iran arrived at the airport in the provincial capital Khost with food and other humanitarian assistance supplies, according to Zabihullah Mujahid, chief spokesperson for the Taliban-run administration.