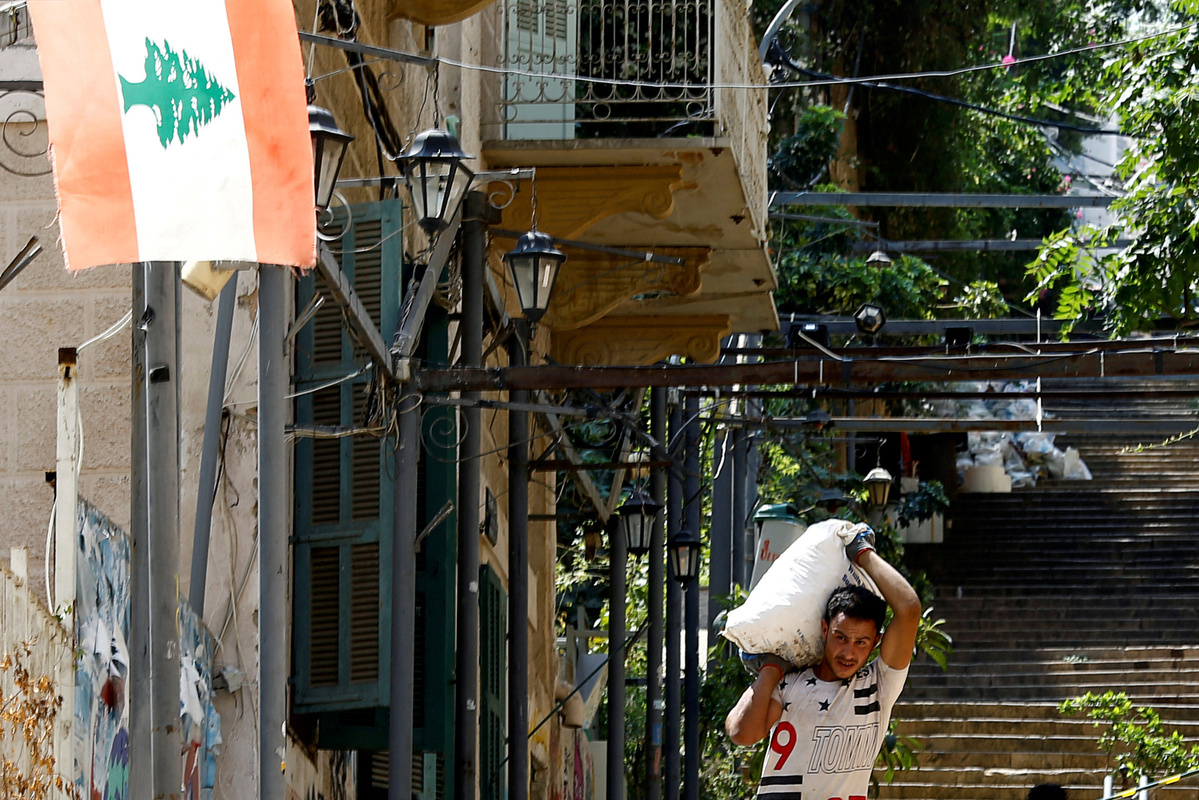 A man carries a bag containing debris in the aftermath of a massive explosion in Beirut's port area, in Beirut, Lebanon on Aug 12, 2020. [Photo/Agencies]

UN seeks best ways to help the most needy in Beirut, with losses revised up

BEIRUT－The United Nations and partner organizations are assessing how best to deliver emergency assistance to the most needy after last week's massive explosions in Beirut, the UN Office for the Coordination of Humanitarian Affairs, or OCHA, said on Wednesday.

Losses from the explosions that devastated the port in the Lebanese capital on Aug 4 have exceeded $15 billion, according to Lebanese President Michel Aoun.

"Primary information states that losses exceed $15 billion in addition to the port's damage and the need for reconstruction material to rebuild the infrastructure that was destroyed by the explosions," Aoun said on Wednesday in a phone call he received from Spanish King Felipe VI, local TV channel LBCI reported.

The World Food Programme has prepared 150,000 food parcels for distribution to families affected by the economic crisis and COVID-19 lockdown measures. In addition, its cash assistance program in Lebanon will be increased tenfold to reach 1 million people, including residents directly affected by the blasts, said the OCHA.

The UN's refugee agency has distributed hot meals for 30,000 people, along with food kits for 700.Nonfood items and hygiene kits have also been provided, it said.

Partners of the UN Population Fund have distributed so-called dignity kits to 2,000 adolescent girls and women. Forty frontline social workers have been trained to provide psychosocial support to women affected by the blasts.

The UNICEF is supporting 720 children and adults with psychosocial support through face-to-face sessions, phone calls, and door-to-door visits to families, the OCHA said.

Assessments by the fund indicate that 20 public technical and vocational education and training schools that cater to about 8,000 teenagers and young adults have been damaged. This is in addition to initial assessments by Lebanese education authorities that have identified 120 damaged schools.

Also on Wednesday, the Kremlin said in a statement that Russian President Vladimir Putin and his French counterpart Emmanuel Macron discussed the Lebanese crisis in a phone call.

"Putin and Macron discussed in detail the situation in the Republic of Lebanon, focusing on the steps taken by Russia and France to provide humanitarian assistance to the people in Lebanon after the explosion in the port of Beirut on Aug 4," the statement said.

Macron shared the impressions of his recent visit to Lebanon, as well as the results of a videoconference organized by France on Aug 9 to rally international aid for the country.

"During the exchange of views on internal political developments in Lebanon, the Russian side reaffirmed its position in support of the republic's national unity and sovereignty," said the statement.

The need to resolve any controversy via a process consisting of and led by the Lebanese, based on constructive dialogue and without external interference, was also underscored, it added.

The two huge explosions that rocked the Port of Beirut shook buildings across Lebanon's capital. At least 172 people have been killed and 6,500 injured. More than 300,000 people were left temporarily homeless in the country's worst peacetime disaster.

To make things worse, Lebanon has entered a phase of community transmission of COVID-19, with 1,200 cases under investigation. This is particularly concerning for the thousands of young people and other volunteers helping in the cleanup, the OCHA said.

The damage and loss of life from the explosions compound Lebanon's problems as its endures the worst economic crisis in its history.

Lebanon's Parliament on Thursday approved a two-week state of emergency imposed by the government after the deadly port explosions that gives it legal authority to calm protests. Parliament speaker called for quickly forming a new government.

Senior US diplomat David Hale was expected in Beirut later on Thursday to stress the urgent need for financial reforms, and stamping out graft, among other messages, the US embassy said.

Under intense domestic and foreign pressure, Prime Minister Hassan Diab announced his government's resignation on Monday. His government is staying on in a caretaker capacity.