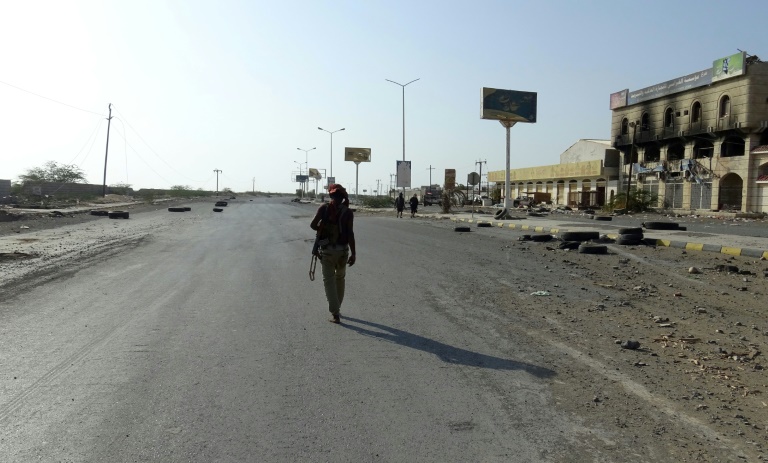 A Yemeni pro-government fighter walks in the flashpoint port city of Hodeida on December 15, 2018 (Photo: AFP)

The UN's envoy to Yemen called on Sunday for pro-government forces and rebels to respect a ceasefire in the Red Sea port city of Hodeida, after repeated clashes between the two sides threatened to unravel a hard-won accord hammered out in Sweden last week.

"The special envoy expects the two parties to respect their obligations as per the text and spirit of the Stockholm Agreement and to engage in the immediate implementation of its provisions," envoy Martin Griffiths tweeted.

He said the UN was working with Yemen's Saudi-backed government and Iran-aligned Huthi rebels to ensure the accord on Hodeida reached on Thursday was "implemented timely and properly".

UN chief Antonio Guterres warned that "much worse" lay in store for the impoverished country in 2019 unless its warring parties strike a peace deal and head off a humanitarian crisis.

The two sides exchanged accusations of violating the ceasefire accord that took effect on Friday but which quickly came under pressure.

A resident of the city reached by telephone said that the clashes were "fierce" and the sounds of jets could be heard throughout the night until about 5 am (0200 GMT) on Sunday.

Another resident, who spoke on condition of anonymity, also reported ongoing fighting in the city, home to a lifeline port.

"There are sounds of jets and air strikes, but we don't know what they are targeting," he told AFP by telephone.

At least 29 fighters, including 22 Huthi rebels and seven pro-government troops, were killed on Saturday night in clashes and air strikes in Hodeida province, a pro-government military source told AFP.

No other sources could confirm the death toll.

The pro-government source added that seven rebels were captured during a Huthi attack on Al-Durayhimi district, which lies about 20 kilometres (12 miles) south of Hodeida city.

According to the insurgents' Al-Masirah television on Sunday, there were ongoing clashes and air strikes in the city and its outskirts.

The truce between Yemeni government forces, backed by a Saudi-led military coalition and the Huthi rebels was due to be followed by the withdrawal of fighters from Hodeida within days on both sides.

Thursday's ceasefire accord has been seen as the most significant step towards ending the devastating conflict in Yemen, where more than 14 million people are on the brink of famine.

The United States commended on Sunday the two sides that took part in the Sweden negotiations for "making progress on key initiatives", calling for a de-escalation of tensions.

"Moving forward, all must continue to engage, de-escalate tensions, and cease ongoing hostilities," the US embassy in Riyadh tweeted.

A prisoner swap involving some 15,000 detainees is planned and a "mutual understanding" has been reached to facilitate aid deliveries to Yemen's third city Taiz -- under the control of loyalists but besieged by rebels.

The two sides also agreed to meet again in late January for more talks to define the framework for negotiations on a comprehensive peace settlement.

Severe food shortages mean that a high number of Yemenis have been dying in "very dramatic circumstances", Guterres told a news conference in Doha.

"The fact that famine was not yet declared does not in any way diminish our huge concern with a very high level of hunger that exists in Yemen" and "people dying in very dramatic circumstances", the UN chief said.

"Without peace, we will be facing in 2019 a much worse situation than today."

On Friday, UN special envoy Martin Griffiths called for the urgent creation of a strong monitoring mechanism in the war-torn country.

"A robust and competent monitoring regime is not just essential. It is also urgently needed," Griffiths told the UN Security Council.

He added that "allowing the UN the lead role in the ports is the vital first step".

UN humanitarian chief Mark Lowcock has for months been warning of a worsening situation in Yemen and says the UN is asking for $4 billion to help suffering Yemenis next year.

Impoverished Yemen has been mired in fighting between the Huthi rebels and troops loyal to President Abedrabbo Mansour Hadi since 2014.

The war escalated in 2015 when a Saudi-led military coalition stepped in on the government's side.

The conflict has since killed nearly 10,000 people, according to the World Health Organization. But some rights groups believe the toll to be far higher.