Five people had to ski through a heavy Alaska snowstorm to a mountain chalet after abandoning their airplanes on a glacier on North America’s tallest peak, where they were stranded for the weekend, officials said Monday. 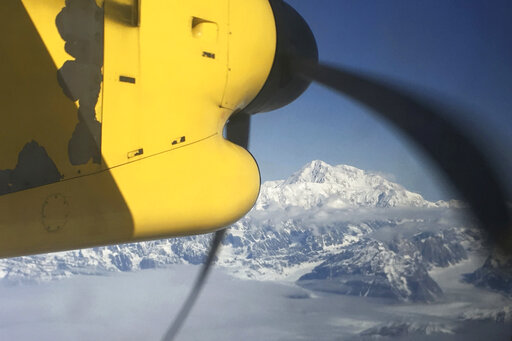 This May 10, 2017 file photo shows Denali, North America's tallest peak, from an airplane flying over the Alaska Range near Talkeetna, Alaska. (Photo: AP)

A fast-moving storm prevented them from flying off the glacier, and they spent Friday night in their airplanes at about 4,500 feet (1,372 meters). They woke up Saturday and realized they didn’t have enough resources to ride out the storm.

“That’s when they called for help,” Gualtieri said.

Two guides who work at the Sheldon Chalet about 3 1/2 miles (5 1/2 kilometers) away were temporarily hired by the National Park Service to serve as a search and rescue team, guiding those who were stranded back to the chalet.

“We contacted them there, and they had the requisite gear, and so brought them skis and harnesses and roped up with them and guided them back,” Gualtieri said.

But their aircraft will remain on Denali for now because the storm dumped up to 3 feet (1 meter) of snow on the glacier, she said. And when they do return for the planes, there will be some hard work to do to get them off the mountain.

“It’ll probably be a larger effort than just getting back in the aircraft and flying out,” she said. They will “maybe go in with some more people and snowshoes and make for a runway out there in the glacier.”

And how does someone make a runway in 3 feet (1 meter) of new snow?

People would likely have to stomp out a runway with their snowshoes, she said.

None of the five people was injured, and the airplanes were not damaged when they left them Saturday.