Emergency workers on Wednesday pulled dust-covered corpses from the ruins of an earthquake that has claimed 30 lives in Albania, as aftershocks hampered the second day of search efforts for survivors. 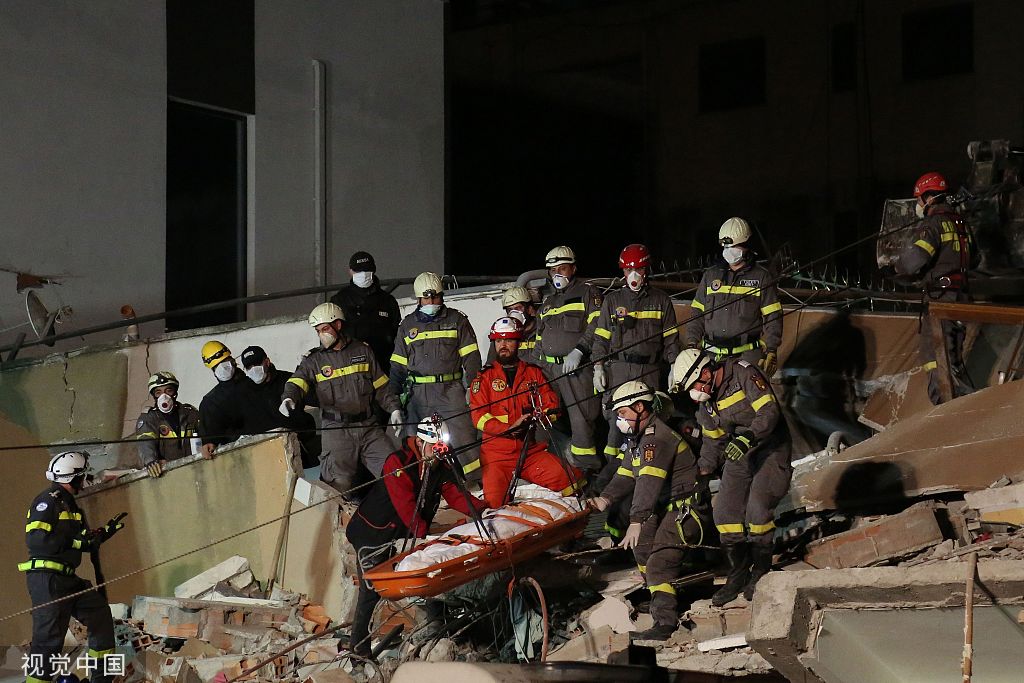 Romanian rescuers remove a victims' body from the ruins of a collapsed building on November 27, 2019, in Durres, after an earthquake hit Albania. (Photo: VCG)

The 6.4 magnitude earthquake that rattled the Balkan state early Tuesday morning was the most powerful and damaging in decades.

In the hard-hit coastal city of Durres and the town of Thumane, apartments and hotels collapsed into mountains of rubble, trapping residents beneath.

With the help of dogs and 200 experts flown in from across Europe, rescuers raced against time to clear away the wreckage after 45 people were pulled out alive the previous day.

But a series of strong aftershocks put temporary pauses on search efforts and sent fresh bolts of panic in the streets.

Devastated relatives wept in the morning as search teams in Thumane unearthed the bodies of a married couple, Pellumb and Celike Greku, from a building torn down by the force of the earthquake.

"Terrible, terrible," an elderly woman dressed in black shouted, pulling at her hair as the bodies in pyjamas were wrapped in blankets and carried away.

Their son Saimir, who was visiting from abroad, was rescued alive from the rubble Tuesday night but later died in hospital, according to relatives and neighbours.

"They went to heaven together, they were very honest and poor people," said Valbona Cupi, 60, another local, in tears.

By Wednesday evening the official death toll was 30 dead, the defence ministry said, with some 650 people treated for mostly minor injuries.

In Durres, a beach destination on the Adriatic coast, 27 buildings had crumbled and at least a dozen people were killed.

As darkness fell, thousands of residents prepared to spend a second night sleeping in tents or on the grass of the city's football stadium.

Many were afraid to return home due to the tremors that followed Tuesday's quake, including a 5.3 magnitude earthquake that shook buildings in Durres on Wednesday afternoon.

During a visit to the city, Prime Minister Edi Rama said the government would arrange for homeless families to be moved into hotels.

"We cannot spend the winter under open skies or in tents," he said, pledging to put each family in a new home by 2020.

In the district of Keneta, emergency workers and relatives kept searching for a family of six -- two parents and four children -- whose home was flattened by the earthquake.

"Hope is the last thing that dies," said Asije, 40, a close relative of the Lala family who had moved to the port city from Albania's poor north in search of a better life.

Another relative, Hasan Lala, was working with rescuers who used pickaxes, shovels and their hands to clear debris and move slabs of concrete.

"The rescue operation is very difficult because you can't use heavy machinery, you have to work with your hands," he said.

Albania is one of the poorest countries in Europe, but rescue specialists and emergency aid have poured in from around the continent.

The government declared Wednesday a national day of mourning and cancelled festivities planned for Independence Day celebrations on November 28 and 29.

Durres and Thumane were also put under a 30-day state of emergency.

In an act of solidarity, neighbouring Kosovo, whose population is mostly ethnic Albanian, also went into official mourning.

Two Kosovar brothers, Shemsedin and Isa Abazi, were among those killed in Durres when their hotel collapsed, according to Pristina.

Earthquakes are relatively common in the Balkans due to the movements two large tectonic plates -- the African and Eurasian -- and the smaller Adriatic micro-plate.