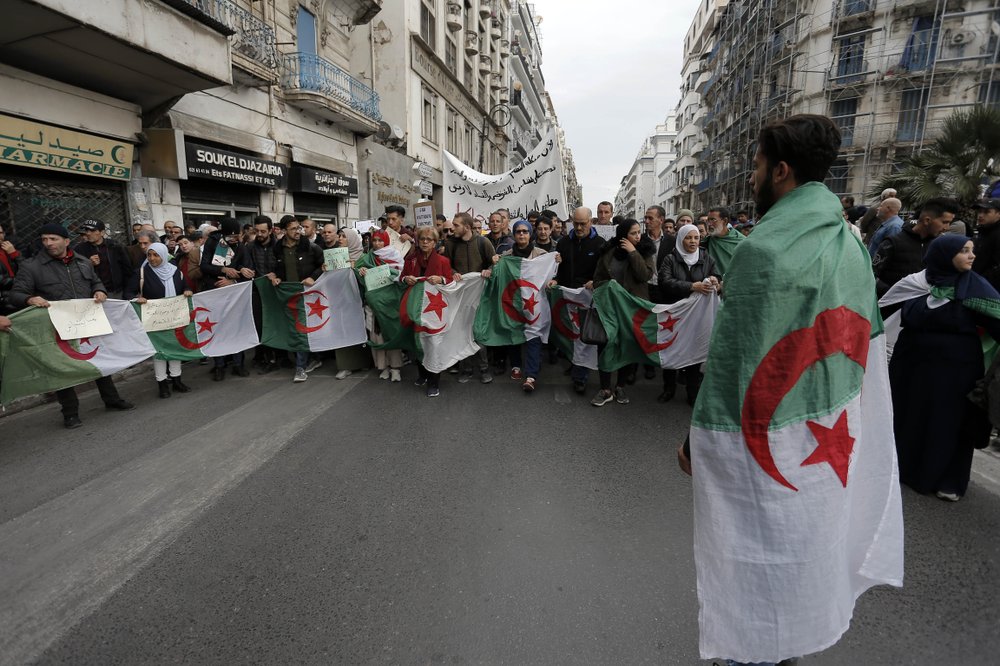 Algerian students take to the streets in the capital Algiers to reject the presidential elections and protest against the government, in Algiers, Algeria, Tuesday, Dec. 17, 2019. (Photo: AP)

Algeria’s new president pledged Thursday to introduce presidential term limits and bring more young people into politics, as he tries to win over a pro-democracy movement that boycotted his election and forced out his long-serving predecessor.

Members of Algeria’s governing elite hope Tebboune helps the country turn the page on 10 months of peaceful but persistent protests that have threatened their legitimacy and stalled the economy. Many protesters reject Tebboune as part of a discredited elite, and want a new political system instead.

“The constitution guarantees ... the right to protest,” Tebboune said.

In his first presidential speech, he promised to tackle the corruption that the protesters decry, and to curtail his own powers.

He announced a revision of the constitution to introduce a two-term limit for presidents. Bouteflika’s bid for a fifth term — despite being hobbled by a stroke — is what unleashed this year’s protests and led to his downfall.

In a symbolic but important move, Tebboune declared that the president would no longer be referred to as “Your Excellency” — Fakhamatouhou in Arabic — but simply as “Mr. President.”

“We are all Algerians. No one is greater than another,” he said.

In a country with a big population of disillusioned youth, he promised better access for young people to positions of power. And he announced a new economic strategy to end Algeria’s dependence on oil and gas profits.

However he also gave a clear nod to Algeria’s still-influential military, praising the armed forces chief of staff, Gen. Ahmed Gaid Salah, for his role in “protecting the country.”

Uniformed officers from the four branches of Algeria’s military saluted Tebboune as he arrived at the Palace of the People outside Algiers for his inauguration.

After a reading from the Quran, the head of the Constitutional Council pronounced Tebboune as the winner of last week’s presidential election.

The new president was decorated with the national merit award as a military band played the Algerian anthem.

Algeria remains a key ally of Western powers fighting terrorism in the region, and foreign dignitaries attended Thursday’s inauguration in the presidential palace of the capital, Algiers.

Tebboune, was elected with 58% of the vote in an election boycotted by protesters because it was organized by the political elite.