WORLD Algerian president back home amid mass protests against him

Algerian president back home amid mass protests against him 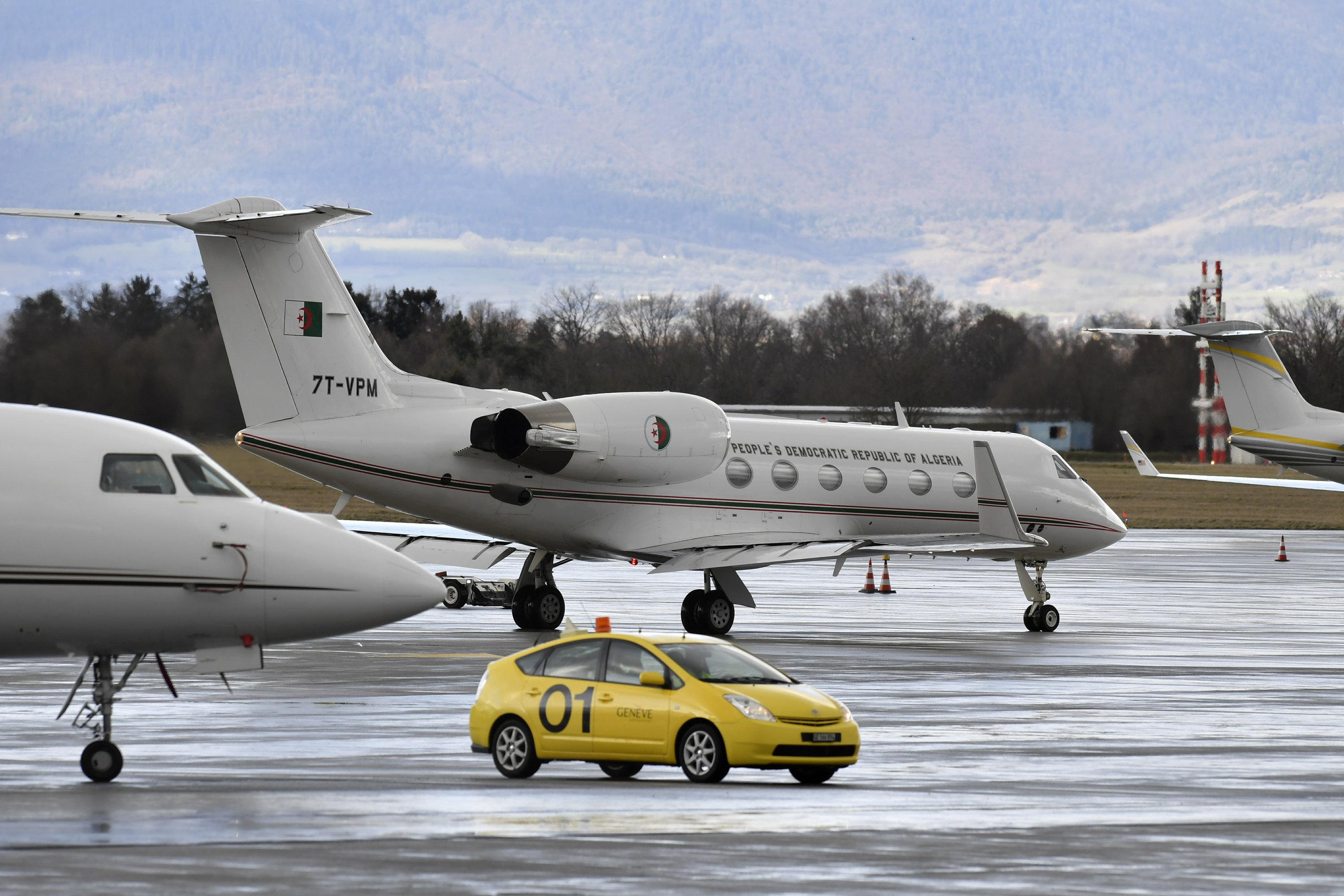 A Gulfstream 4SP jet owned by the Algerian government stands on the airfield at the airport in Geneva, Switzerland, Sunday, March 10, 2019. (Photo: AP)

Algerian President Abdelaziz Bouteflika landed at a military airport south of the capital Sunday after spending two weeks in a Swiss hospital amid massive demonstrations demanding he withdraw his candidacy for a fifth term.

The 82-year-old Bouteflika suffered a stroke in 2013 and has rarely been seen in public since. The decision to run for a new term in the April 18 election angered large swathes of Algerian society.

Bouteflika arrived at Boufarik military south about 30 kilometers (20 miles) south of the capital, and was shown in video by private television station Ennahar in a fast-moving convoy heading toward the Algiers suburb of Zeralda. He could be seen inside a car slightly bent over and with a cap on his head.

Bouteflika resides in Zeralda, not in the presidential palace in the capital.

Earlier, Bouteflika had departed from a Geneva airport. Bouteflika spent two weeks at a Swiss hospital where he went for medical treatment.

The power structure has been shaken by the size of the unprecedented citizens’ revolt, which has drawn millions into the streets of cities across the country to say no to a fifth term — and to a system blamed for corruption and keeping Bouteflika in office despite ailments.

A general strike Sunday was taking place as the president arrived, with numerous shops in Algiers and other cities closed.

As if to lay the groundwork for change, the top Algerian party backing the beleaguered chief of state broke its silence Sunday over massive demonstrations demanding the end of the regime, saying it’s ready to work with all parties to end the crisis.

The National Liberation Front, or FLN, said in a statement that it wants to find a way out of the crisis “with the least cost to the country.”

Army Chief of Staff Ahmed Gaid Salah added his voice, saying Sunday that the army and the people “have the same vision of the future.”

Peaceful nationwide protests began Feb. 22 to protest Bouteflika’s plan to run for a fifth term in April 18 elections. The protest movement also wants a change in the much-decried system that has kept him there and has a stranglehold on the power structure.

Bouteflika, first elected in 1999, is the first civilian president of the North African nation except for a short term when Algeria won its independence from France in 1962. A coterie of people have grown rich under him and are thought to exert pressure on the presidency.

In a third week of protests on Friday, hundreds of thousands of people flooded the streets of Algiers calling for change in the biggest demonstration yet against Bouteflika. Similar marches were held across the country.

The government plane, which had been hidden away from view in a hangar, taxied onto the runway at Geneva airport as a rainbow came into view.

Algerian officials had said days ago that Bouteflika was expected to return shortly.