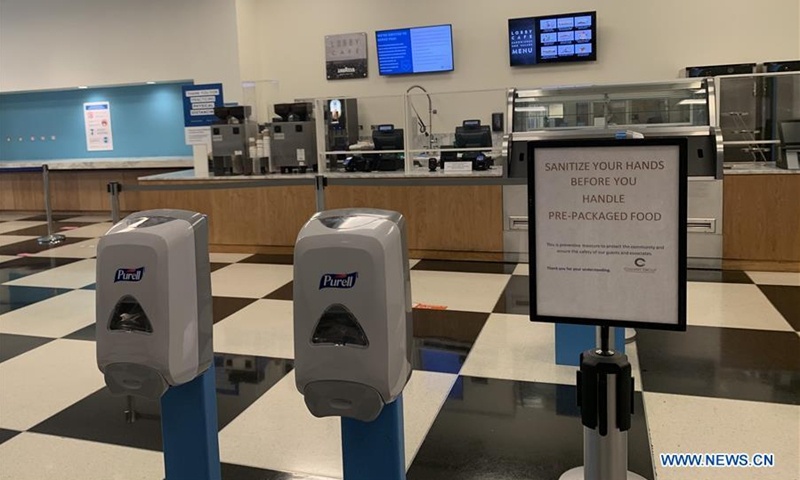 All in-person meetings at the UN headquarters in New York were suspended on Tuesday after five diplomats of a country's UN mission tested positive for COVID-19, a UN spokesman said.

"Yesterday, the UN Secretariat was informed by a permanent mission that they had five positive cases among their staff. The UN medical service immediately initiated contact tracing with the full cooperation of the permanent mission. As of now, all in-person meetings have been suspended for today," said Stephane Dujarric, spokesman for UN Secretary-General Antonio Guterres, at the regular noon briefing.

Dujarric refused to disclose the country name of the mission. Media reports said earlier that the five infected diplomats are from Niger, a member of the 15-member Security Council that last met in person on Thursday.

Diplomats said people who attended Thursday's meeting were being tested for COVID-19, and an in-person meeting on Syria planned for Tuesday was instead held virtually.

According to Dujarric, there had been 1,300 to 1,400 swipes of ground pass into the UN buildings at its New York headquarters over the last two or three weeks compared to about 11,000 swipes before a work-at-home order was issued in March.

Volkan Bozkir, president of the 75th session of the UN General Assembly, wrote a letter to all member states on Monday evening, saying that the organization's medical unit had suggested the cancellation of in-person conferences on the headquarters on Tuesday.

Bozkir added that the conferences would likely be cancelled pending the outcomes of contact tracing.

Dujarric told Xinhua in an email saying that as of Tuesday afternoon, there had been 132 COVID-19 cases in the entire UN system, including 10 diplomats from relevant countries' UN permanent missions and 45 international staff.

When answering the question about how long the lack of any in-person meetings will take place, Dujarric said that "my estimate is that we will continue for a few more days."

He said that for the secretary-general, "it is of foremost importance that staff be safe, that delegates be safe, that you be safe, all those who are coming into the building ..."

"I think our staff have done a tremendous job during the lockdown," he added.

On March 12, the first case of COVID-19 at the UN headquarters was reported by a diplomat with the Philippines mission to the UN.

The UN chief on March 13 demanded all UN staff to work remotely from March 16 to April 12, to mitigate the spread of COVID-19 at the UN headquarters in New York. The telecommuting rule has remained unchanged ever since.

The UN Security Council held an in-person meeting on July 14 at UN headquarters in New York, the first of its kind since mid-March when COVID-19 forced the Council to convene virtually. 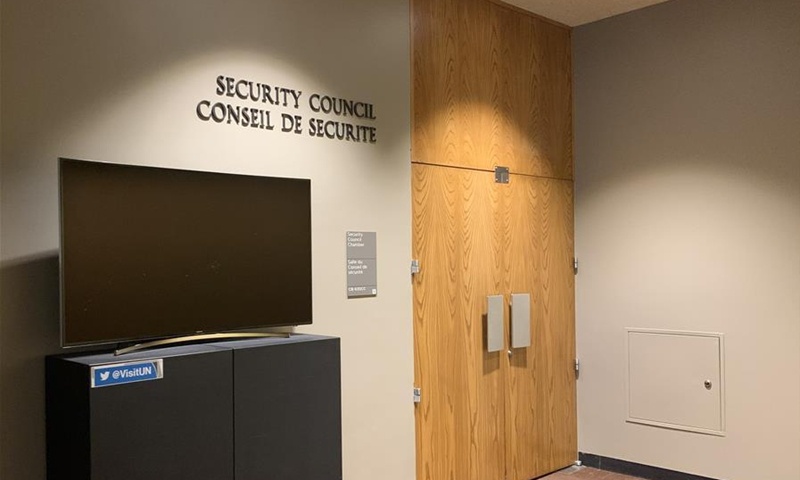 Photo taken on Oct. 27, 2020 shows the entrance of the closed United Nations Security Council chamber at the UN headquarters in New York. 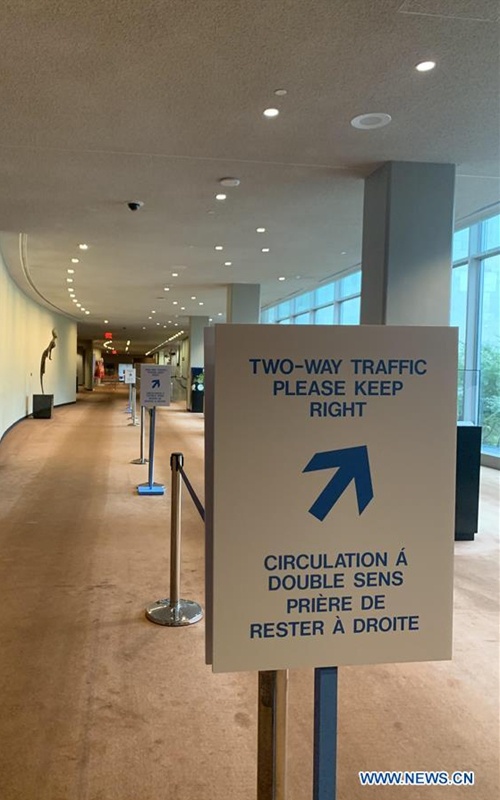 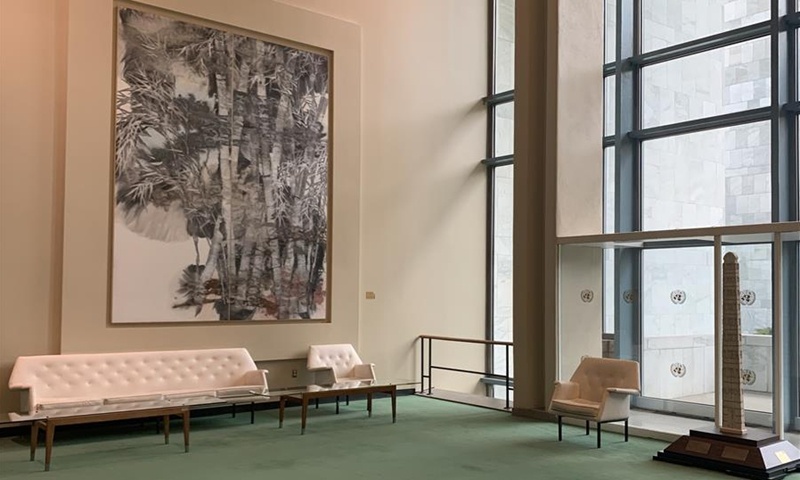 Photo taken on Oct. 27, 2020 shows a view of the China Lounge at the United Nations headquarters in New York. 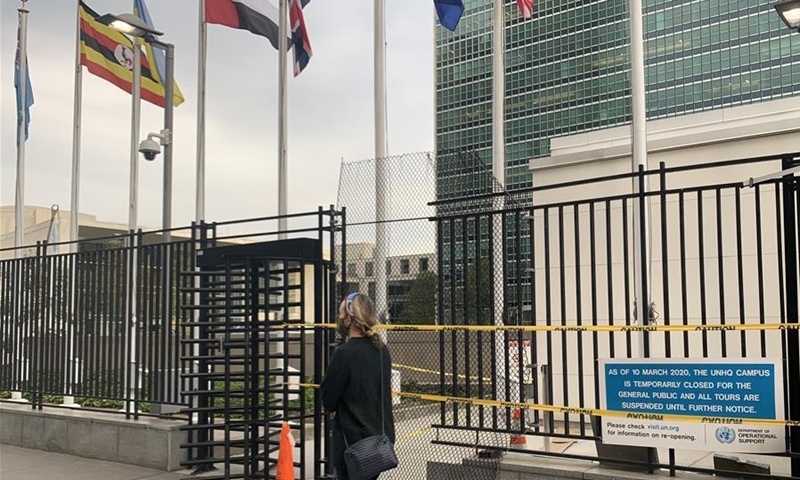 A woman walks by the staff entrance of the United Nations headquarters in New York, Oct. 27, 2020. 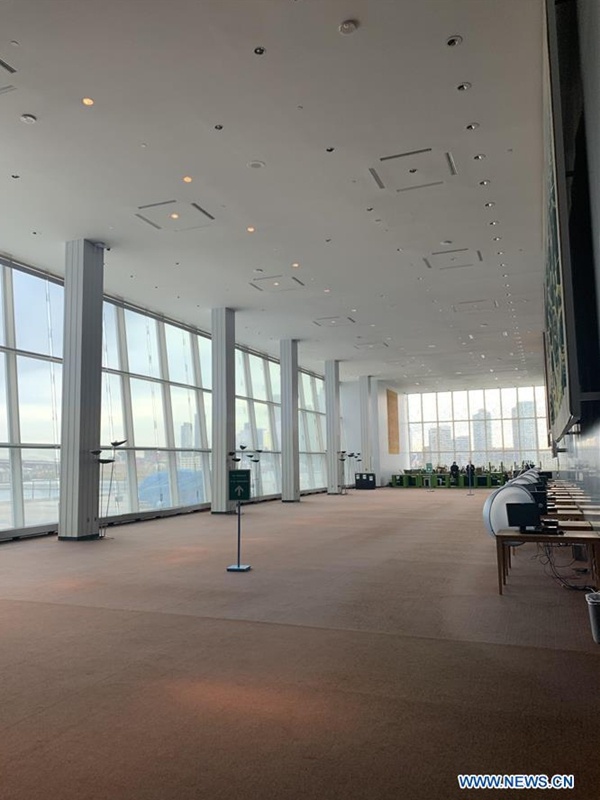 Photo taken on Oct. 27, 2020 shows a view of the empty Delegates Lounge at the United Nations headquarters in New York. 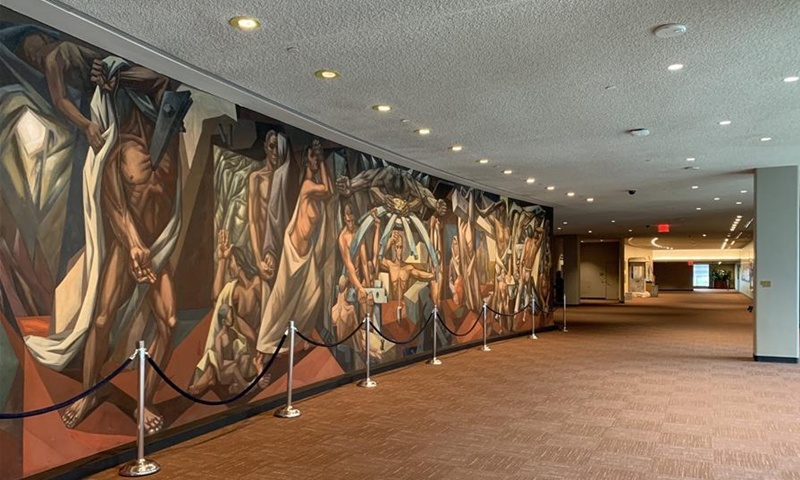 Photo taken on Oct. 27, 2020 shows an empty hallway at the United Nations headquarters in New York.