WORLD All options on table regarding Venezuela: US national security advisor

All options on table regarding Venezuela: US national security advisor 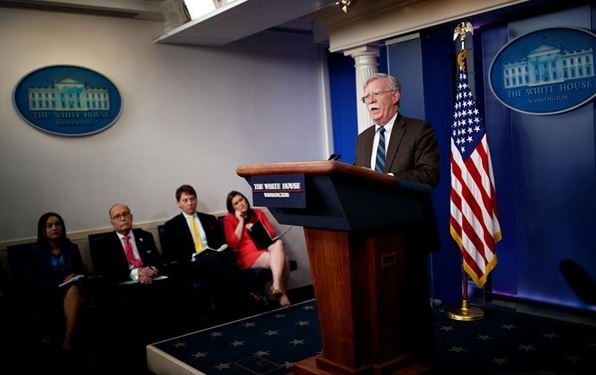 US National Security Advisor John Bolton speaks at a press briefing at the White House in Washington D.C., the United States, on Nov. 27, 2018. (File Photo: Xinhua)

WASHINGTON, April 30 (Xinhua) -- The United States hopes to see a peaceful transfer of power in Venezuela but keeps all options on the table, US National Security Adviser John Bolton said on Tuesday amid an attempted coup in the South American country.

"We want, as our principal objective, a peaceful transfer of power," Bolton told reporters, but reiterated President Donald Trump's stance that "all options are on the table."

Bolton called on Venezuelan defense chief and other key officials to support the opposition leader Juan Guaido, and noted that the United States treats Russian's actions in Venezuela with "utmost seriousness."

US Democratic Representative David Cicilline criticized Bolton's remarks as "both dangerous and wrong," emphasizing that "there is no military options for the US And if the President and his advisors want to go down that road, they will need to request authority from Congress."

Venezuelan media reported that Guaido showed up early Tuesday morning along with some military personnel outside the La Carlota aviation military base, calling on civilians and military to act against the government and urging President Nicolas Maduro to step down.

Maduro said via Twitter that military commanders from all regions and defense areas of the country have "expressed their loyalty to the people, the Constitution and the country."

Also on Tuesday, Trump tweeted that he was monitoring the situation in Venezuela closely, while Vice President Mike Pence and State Secretary Mike Pompeo both demonstrated their support to Guaido via Twitter.

Venezuelan Vice President Delcy Rodriguez responded on Twitter, saying that "the US government shamelessly and immorally acknowledges its authorship in this criminal attempted coup in Venezuela."

US Southern Command, which oversees US military activities in Latin American and Caribbean, said they are monitoring the recent developments in Venezuela, noting "their mission remains unchanged," Reuters reported citing a military spokesperson.

The United States has been pursuing a policy of economic sanctions and diplomatic isolation against the Venezuelan government in support of the opposition leader Guaido.

The US government recognized Guaido as the nation's "interim president" on Jan. 23, days after Maduro was inaugurated for a second term.