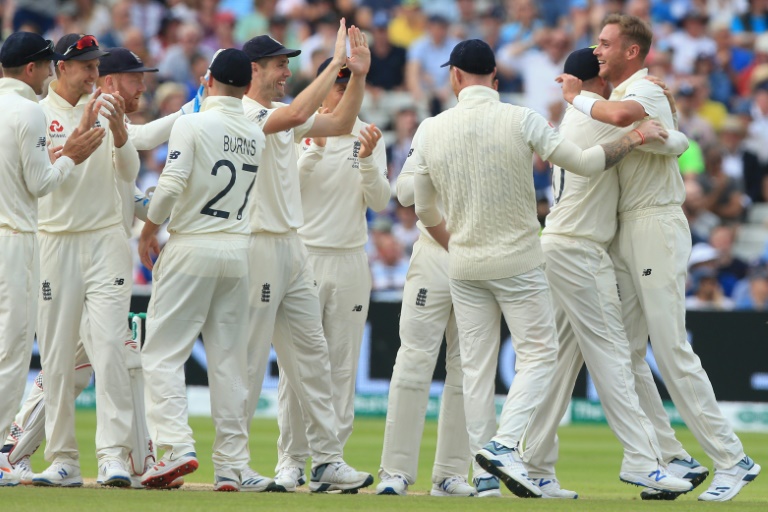 Stuart Broad made valuable tailend runs and then dismissed Australia's David Warner as England established a strong position in the first Ashes Test at Edgbaston on Saturday.

When Warner fell shortly after tea on the third day, Ashes-holders Australia -- looking to win their first series away to England since 2001 -- were 13 for one in their second innings.

That left them still 77 runs behind England's first-innings 374 all out.

In a match already full of overturned decisions, England needed to review West Indian umpire Joel Wilson's original not out call when Warner feathered a catch behind to wicketkeeper Jonny Bairstow on eight to give Broad his 450th Test wicket.

Warner, one of three Australians together with fellow opener Cameron Bancroft and former captain Steve Smith making a return to Test cricket following lengthy bans for their involvement in a ball-tampering scandal in South Africa last year, walked off to raucous chants of "Same old Aussies, always cheating" from England fans.

It was an important blow for Broad, who took 5-86 in Australia's first innings of 284 which featured Smith's superb 144, as new-ball partner James Anderson was off the field with a calf injury that meant England's all-time leading Test wicket-taker only bowled four overs first time around.

Earlier, England opener Rory Burns batted for nearly eight hours to top-score with 133 -- his maiden Test hundred - in an innings where featuring half-centuries from captain Joe Root (57) and Ben Stokes (50).

England lost three wickets for four runs before lunch to slump to 300-8 -- just 16 runs ahead.

But a ninth-wicket stand of 65 between Chris Woakes, who made 37 not out on his Warwickshire home ground, and Broad (29) boosted their total.

England resumed on 267-4, 17 runs adrift, with Burns, who would have been out for 21 if Australia had reviewed after a rejected Lyon lbw appeal, 125 not out and vice-captain Stokes 38 not out.

Stokes was out for exactly 50 when he a loose cut off Cummins was caught behind by Australia captain and wicketkeeper Tim Paine to end a stand of 88 with Burns.

New batsman Bairstow gave England the lead with a four off Pattinson while Burns -- who only managed three runs in Saturday's first hour -- drove Peter Siddle to the cover-point rope.

But Lyon finally ended the left-hander's marathon innings when a delivery that turned and bounced took the outside edge and was well caught by Paine.

By contrast, new batsman Moeen Ali lasted just five balls before he inexplicably shouldered arms to Lyon and was clean bowled for a duck -- the eighth time the spinner had dismissed him in 10 Ashes innings.

And when Bairstow was recklessly caught in the slips off Siddle, England's 300-7 became 300-8.

England now led by just 16 runs, with Woakes and Broad then each on nought.

But Woakes hoisted Lyon for a legside six and the pair accumulated runs steadily before Broad turned Cummins straight to long leg.