WORLD All survive as plane carrying US military crashes into river

All survive as plane carrying US military crashes into river

A military-chartered jet carrying 143 people landed hard, then bounced and swerved as the pilot struggled to control it amid thunder and lightning, ultimately skidding off the runway and coming to a crashing halt in a river at Naval Air Station Jacksonville.

It meant chaos and terror for passengers in the Boeing 737 as the plane jolted back and forth and oxygen masks deployed, then overhead bins opened, sending contents spilling out. 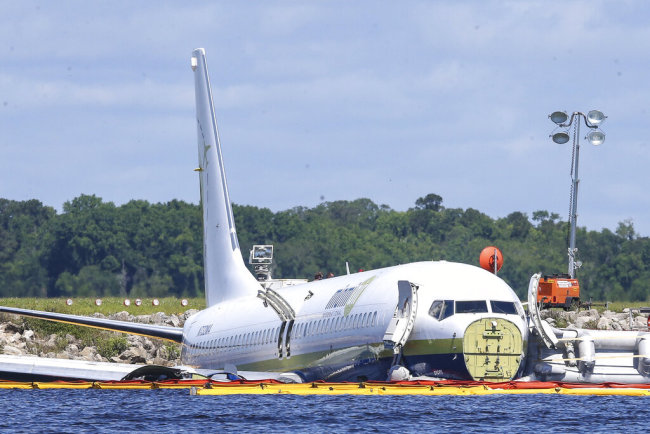 A charter plane carrying 143 people and traveling from Cuba to north Florida sits in a river at the end of a runway, May 4, 2019 in Jacksonville, Fla. (Photo: AP/Gary McCullough)

But authorities said all the people onboard emerged without critical injuries Friday night, lining up on the wings as they waited to be rescued. Only a 3-month-old baby was hospitalized, and that was done out of an abundance of caution, officials said.

"I think it is a miracle," said Capt. Michael Connor, the base's commanding officer, hours after the plane landed. "We could be talking about a different story this evening."

The National Transportation Safety Board sent a team of investigators Saturday to the crash site in the St. Johns River in north Florida, where the aircraft was still partially submerged in shallow water and its nose cone was sliced off, apparently from the impact. Two pet cats and a dog were still on the plane as well, and their status wasn't immediately clear.

Rescuers looked in the cargo area after the plane ended up in the river but saw no crates and heard no animal noises. When they returned later, they didn't see any pet carriers above water, Connor said.

The flight took off Friday from Naval Station Guantanamo Bay, Cuba, with 136 passengers and seven crew members. It was a regular charter run by Miami Air International, which has many military contracts, including weekly flights between Guantanamo Bay and the Jacksonville air station as well as Andrews Air Force Base in Maryland. The company didn't immediately respond to messages from The Associated Press.

The aircraft had no prior history of accidents, said NTSB vice chairman Bruce Landsberg.

Among those onboard was Cheryl Bormann, a defense attorney, who described the chaotic landing. 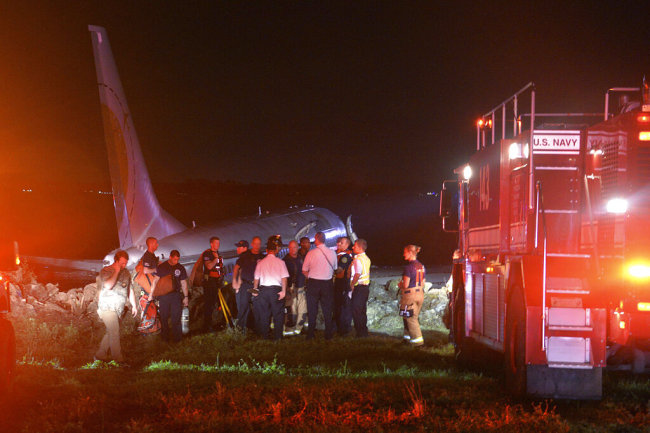 Emergency crews work next to a Boeing 737 aircraft arriving from Naval Station Guantanamo Bay, Cuba, which slid off the runway at Naval Air Station Jacksonville, Fla., into the St. Johns River, May 3, 2019. (Photo: US Navy via AP)

The plane "literally hit the ground and then it bounced. It was clear that the pilot did not have complete control of the plane because it bounced some more, it swerved and tilted left and right," she told CNN. "The pilot was trying to control it but couldn't, and then all of a sudden it smashed into something."

Bormann said people weren't screaming because the flight staff worked quickly to give direction. Everyone onboard helped one another to put on their life vests and then evacuated to safety.

A veteran death penalty attorney from Chicago, Bormann has been defending Walid bin Attash, who is charged with helping to train some of the 9/11 hijackers. The US holds 40 men at the detention center at Guantanamo Bay. It has been prosecuting some of them by military commissions, including five charged with planning and aiding the Sept. 11, 2001, terrorist attacks. Their cases have been in the pretrial stage since May 2012 and no trial has been scheduled.

Authorities say everyone onboard the flight was alive and accounted for, but nearly two dozen people sought medical attention.

The passengers were a mix of military personnel and families, and a few civilians. While some were staying in the area, others planned to fly on to other parts of the country, Connor said.

It wasn't immediately clear what went wrong. Boeing said in a tweet Friday night that it was investigating: "We are aware of an incident in Jacksonville, Fla., and are gathering information."

Connor said he didn't know what impact the weather had on the flight. "I was at home when this happened and there were thunderstorms and lightning," he said.

The plane had been expected to return to Cuba on Saturday to carry other members of the military, lawyers and others to Andrews after this week's military commission hearings of people charged with war crimes.

It wasn't immediately clear how long it would take to remove the plane from the river.

"We have challenges because bottom half of fuselage is covered with water," Landsberg said.

Connor said the landing gear appeared to be resting on the riverbed, making it unlikely for the aircraft to float away. He said crews began working to contain any jet fuel leaks almost immediately after securing the passengers' safety.

The smell of fuel and oil was pungent as AP journalists went by boat for a closer look. The bottom of the plane was under water, making it difficult to access the cargo hold.

"We're obviously very concerned about the environment and we're doing everything we can to contain it," Connor said about the fuel. "Once we were assured that personnel were safe, our next priority effort was to ... contain any type of fuel."