WORLD Alliance with US will crush India's great power fantasies

Alliance with US will crush India's great power fantasies 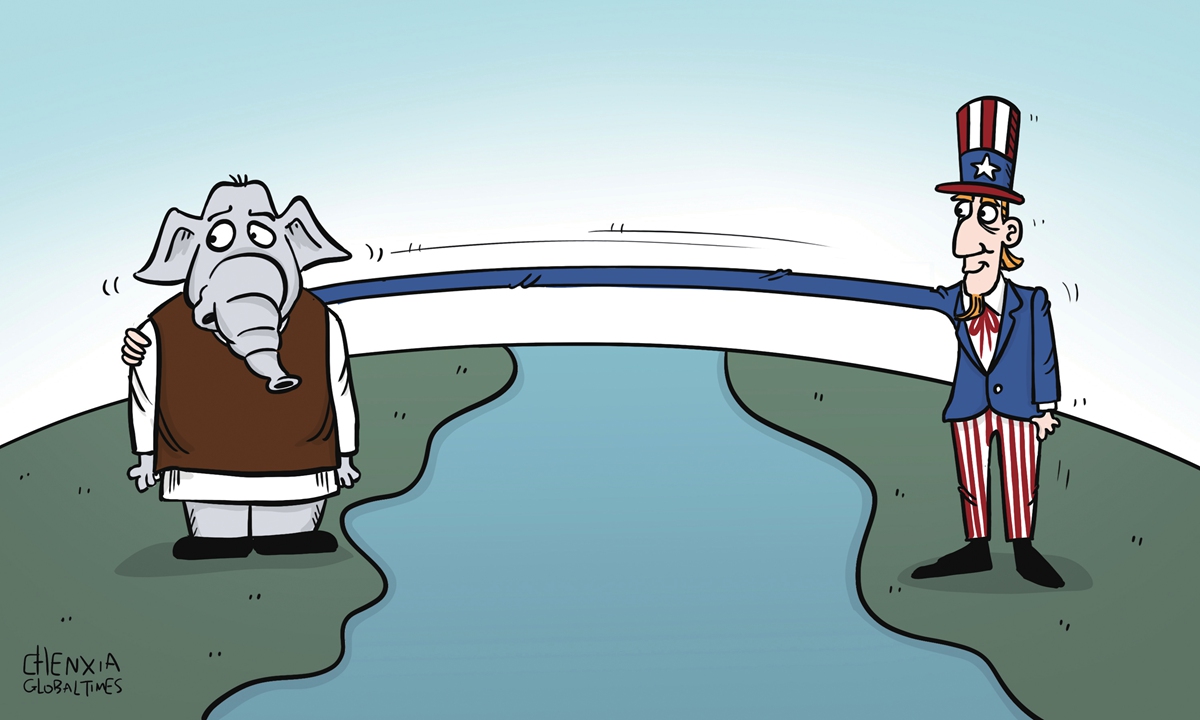 Former US ambassador to the UN Nikki Haley and Republican congressman Michael Waltz recently published a co-signed article in Foreign Policy entitled "It's Time to Formalize an Alliance With India." The article suggested that since the disastrous withdrawal of US troops from Afghanistan, the diplomatic performance of the Biden administration has only disappointed many allies. It also noted US "adversaries are growing bolder." Thus "An upgrade is urgently needed," Haley and Waltz wrote.

The article highlighted that India has powerful armed forces and a long history of cooperation with the US. The two countries share many common values. India is also a nuclear power. A US-India alliance can have many advantages. "Just as our alliances with NATO, Japan, and South Korea transformed US security in the 20th century, an alliance with India would help keep us safe in the 21st century," the authors declared, while suggesting a US-India alliance would allow both countries to expand their global strength and counter China.

This is another old school tactic with strong Cold War sentiment, and an attempt to form a clique in the modern era. Haley, the first US governor as a descent of Sikh immigrants from Punjab, India, was quite popular in the Trump era. She is viewed as a political star with a promising future among Republican establishment. She has the political capital to return to politics and is a possible frontrunner for the 2024 GOP presidential nomination. Waltz, a veteran from Florida, a Republican stronghold, has always shown his strong anti-China attitude.

Their call not only reflects that some so-called political elites in Washington are still struggling over how to maintain US hegemony. It also reflects the decline of the US after its withdrawal from Afghanistan. At the same time, their self-righteous political ignorance was constantly exposed between the lines.

In Haley and Waltz' view, Farkhor Air Base in Tajikistan, operated by India, is "the only air base with the proximity to conduct counterterrorism strikes in Afghanistan." They advocate that through a US-India alliance, New Delhi can give Washington access to the strategic bases to protect US interests in Afghanistan and the wider region. However, Farkhor Air Base has long been overgrown with wild grass. Moreover, as a member of the Shanghai Cooperation Organization (SCO), and the Russia-led Collective Security Treaty Organization (CSTO), Tajikistan has long enjoyed close ties and high strategic trust with China and Russia. With relations between the US, Russia and China strained, would Moscow or Beijing agree to see the US military aircraft sent out from Tajikistan? Americans like sitting at a big desk and fiddling with a globe. What they are making is merely empty talks. There is no doubt that the generals in the Pentagon will only frown when seeing such suggestion.

From a strategic point of view, this idea of a US-India alliance is nothing new. There is no doubt that diplomacy with Washington has always been the top priority of New Delhi's foreign policy. In India's view, the US is not only the superpower with the greatest international influence, the strongest military power and the most developed economy and technology. It can also provide substantive help to India in many fields such as investment, economics and trade, science and technology, defense and diplomacy. Moreover, India-US relations can also help hedge the geopolitical pressure from China and increase the lever in India's interactions with other powers. Therefore, the idea of uniting the US to contain China has always been popular in the strategic circles in New Delhi.

Last year, when tensions between China and India reached a peak, some strategic circles in New Delhi and China hawks in Modi administration might be enthusiastic about the idea of a US-India alliance. But now, with the birth of AUKUS, a trilateral security pact among Australia, the UK and the US, it is believed that far fewer people in India will like the proposal of forging alliance with the US. The Biden administration keeps talking about a "transatlantic partnership," but even France and the EU are "second-rate allies," which are left out of the small Anglo-Saxon core circle. If India aligns itself with the US, India may highly likely end up with what France is going through today.

The Modi government is committed to leading India to become a global power. It has its own plans and logic for the country's future development and foreign policy. The so-called ideology and democratic values are nothing more than tools to achieve India's goals. With the help of the US, it may be possible for India to obtain the recognition and endorsement for a "great power identity." However, if India is arranged by Quad to take the lead in charging in the anti-China front, and becomes "cannon fodder" of US strategy, Indians will not accept it.

For India, China is the biggest neighbor that cannot be moved away. It is also a major country vital to India's security and development. In fierce competition between China and the US, if Indian leaders are tempted by some anti-China forces at home and abroad, put China-India ties behind, abandon its principle of non-alignment, establish formal alliance with the US, this will undoubtedly be tantamount to turning itself to the enemy of China. And if so, such an India will never become a true global power.

The author is director of the research department at the National Strategy Institute at Tsinghua University. opinion@globaltimes.com.cn