Allies worry as US ponders cutting military forces in Africa 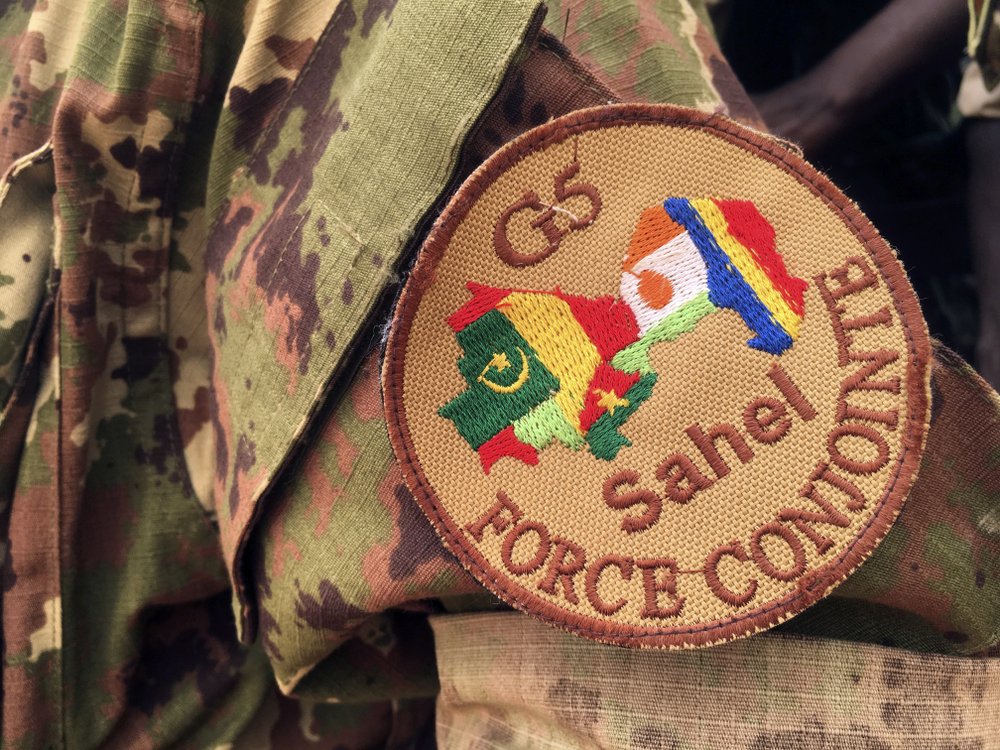 A member of the Army stands guard at the entrance of the headquarters of a new five-nation West African counter terror force, in Mali in November 2018. (File photo: AP)

As extremist violence grows across Africa, the United States is considering reducing its military presence on the continent, a move that worries its international partners who are working to strengthen the fight in the tumultuous Sahel region.

The timing is especially critical in the Sahel, the vast arid region south of the Sahara Desert, where militants with links to al-Qaida and the Islamic State group have carried out increased attacks in the past six months. In Niger and Mali, soldiers have been ambushed and at times overpowered by hundreds of extremist gunmen on motorcycles. More than 500,000 people have been displaced by violence in Burkina Faso.

The pending decision is part of a worldwide review by Defense Secretary Mark Esper, who is looking for ways to tighten the focus on China and Russia.

“My aim is to free up time, money and manpower around the globe, where we currently are, so that I can direct it” toward Asia or return forces to the United States to improve combat readiness, Esper said Monday after meeting with French Defense Minister Florence Parly, who traveled to Washington to urge the US not to reduce forces in the Sahel.

High-profile Republicans and Democrats have warned that such a decision would undermine national security. They argue that cuts in Africa could hand over influence on the booming continent of 1.2 billion people to China and Russia.

The commander of US forces in Africa, Gen. Stephen Townsend, is scheduled to testify Thursday to the Senate Armed Services Committee about the role of American forces in Africa.

Talk of a possible troop reduction “is reinforcing a view in West Africa that the US is not interested, that it does not see it as a strategic importance and that it is going to cut and run and abandon its African allies,” Judd Devermont, director of the Center for Strategic and International Studies Africa Program, told The Associated Press.

The US has about 6,000 personnel on the continent. In West Africa, the Africa Command’s mandate is to advise and assist, whereas, in East Africa, where most of the US troops are located, forces also accompany African troops on missions.

More than 1,000 US personnel are currently in the Sahel. The US has also constructed a $110 million drone base in northern Niger.

Nigeria’s information minister, Lai Mohammed, urged the US not to cut back, citing an increase in terrorism in Burkina Faso, Mali, Niger, Cameroon and Chad since the defeat of ISIS in Syria.

“So I think what we need now is more support,” Mohammed told the AP. “I’m not talking in terms of physical soldiers, American soldiers. But I think we need more support. Otherwise, we will inadvertently be strengthening the hand of the terrorists.”

The looming US decision comes as former colonizer France pledges more support than ever before to Sahel countries. France already has sent more than 200 additional troops to reinforce its already 4,500-strong operation in the Sahel, and French Chief of Staff François Lecointre says he will request even more troops.

The mission in the Sahel “is a classic case of burden sharing, where limited US support leverages an immense effort carried out by France and Europe,” Parly said, speaking alongside Esper on Monday at a Pentagon news conference.

Parly joined top Portuguese, Swedish and Estonian military officials on a visit to Niger, Chad, and Mali last week to discuss how to proceed with an international anti-terrorism coalition dubbed Takouba.

At a summit with West African leaders this month, French President Emmanuel Macron said he hopes to convince US President Donald Trump that the fight against global extremism “is also at stake in this region.”

West African leaders at the summit said they hoped the US would maintain its military presence in West Africa.

The heads of state for the G5 Sahel, a group that includes Niger, Mali, Burkina Faso, Mauritania, and Chad, asked for a continuation of American and French military engagement in the region and “pleaded for a strengthening of the international presence alongside them,” according to the closing statement for the summit.

The US footprint in West Africa, where the cuts would most likely happen, is light compared to other regions. But the effect of its force presence, training programs, development aid, and military assistance is important, leaders say.

Col. Thomas Geiser, deputy commander of special operations for the Africa Command, said the biggest risk is allowing al-Qaida affiliates and the Islamic State to expand “and potentially consolidate safe havens there.”

He emphasized the need for a strengthened regional and multi-national approach to the violence and for more broad support of communities, saying African partners must lead efforts. But a regional security force assembled by the G5 Sahel has struggled to fund its efforts and end the violence.

The G5 Sahel force will now focus most of its efforts in the tri-border region between Niger, Mali and Burkina Faso, targeting Islamic State Grand Sahara, Parly said.

However, progress in the Sahel has been minimal, and the problems there need to be solved by those regional governments, the assistant secretary for the US State Department’s African Affairs division, Tibor Nagy, said Monday during a telephone press briefing.

“The US is actively involved through a number of programs in the Sahel region,” Nagy said. “It takes political will to counter terrorism.”

It is unclear also how the newly constructed drone air base in northern Niger will be affected. Last week, the US handed over a C-130 hangar at Niger Air Base 201 to the Nigerien Air Force.

Col. Abdoul Kader Amirou, deputy chief of staff for the Nigerien Air Force, said the hangar will boost capabilities for the armed forces and “strengthen joint actions between the Nigerien and US forces.”