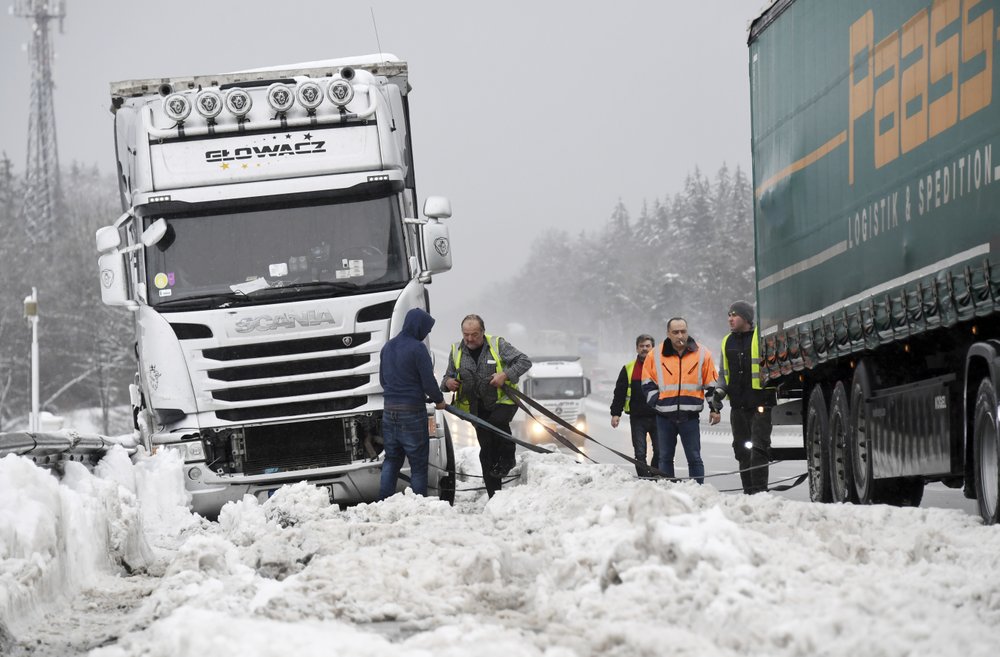 Truck drivers help each other after being trapped by heavy snowfall on the Autobahn A8 near Holzkirchen, southern Germany, Monday, Jan. 7, 2019. (Photo: AP)

Authorities in Austria and southern Germany warned Monday that the risk for avalanches in the northern Alps remains high after several people died in weather-related incidents.

In Germany, 44-year-old man died in Wackersberg in Bavaria when he was hit by tree branches brought down by heavy snow, police said.

Authorities also said Monday that a woman who was buried by an avalanche last week in the Uri canton (state) of Switzerland died of her injuries Saturday.

Also on the weekend, three skiers in Austria were killed by avalanches and one woman in Bavaria died in a weather-related incident.

The Hochkar alpine road and the entire Hochkar skiing region in Lower Austria were closed because of the high risk of avalanches. Residents and visitors were asked to leave the region by the end of the day.

Austrian authorities warned skiers not to go off the slopes and not drive their cars unless needed. More snow was forecast for the coming days and the alpine country said it was getting mountaineer teams and helicopters ready for possible rescue missions.

In Bavaria, authorities also had to close roads and some train lines because of heavy snowfall and in some parts of southern Bavaria and the Steiermark region in Austria, schools were closed Monday because of the weather conditions.

Police in Norway on Monday released the names of four skiers — a 29-year Swedish woman and three Finns, aged 29, 32 and 36 — who are presumed dead after a 300-meter-wide (990-foot-wide) avalanche was reported Wednesday in Tamok valley, near the northern city of Tromsoe.

Heavy snowfall and poor visibility had hampered rescue efforts over the past few days.

Meanwhile, the Netherlands was bracing for strong winds. National carrier KLM canceled 159 flights Tuesday to and from European destinations because Amsterdam’s Schiphol Airport will use only one of its runways due to the expected storm.