A Boeing 767 cargo jetliner heading to Houston with three people aboard disintegrated after crashing Saturday into a bay east of the city, according to a Texas sheriff. 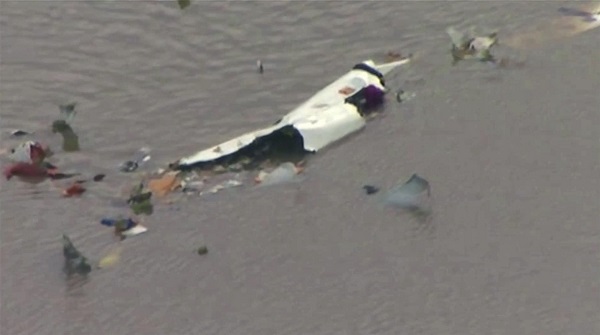 This image taken from video provided by KRIV FOX 26 shows the scene of a cargo plane crash on Saturday, Feb. 23, 2019 in Trinity Bay, just north of Galveston Bay and the Gulf of Mexico in Texas. Lynn Lunsford with the Federal Aviation Administration did not immediately know the status of the people aboard and the Chambers County Sheriff's Office could not immediately be reached for comment. (Photos: AP)

“It’s probably a crash that nobody would survive,” he said, referring to the scene as “total devastation.”

The flight was being operated for Amazon by Atlas Air, according to a statement from the airline. “Our main priority at this time is caring for those affected and we will ensure we do all we can to support them now and in the days and weeks to come,” Atlas Air said in a statement.

Dave Clark, senior vice president of Worldwide Operations at Amazon, said: “Our thoughts and prayers are with the flight crew, their families and friends along with the entire team at Atlas Air during this terrible tragedy. We appreciate the first responders who worked urgently to provide support.”

Witnesses said they heard the plane’s engines surging and that the craft turned sharply before falling into a nosedive, Hawthorne said.

Aerial footage shows emergency personnel walking along a spit of marshland flecked by debris that extends into the water.

Hawthorne told the Houston Chronicle late Saturday afternoon that police had found human remains at the site of the crash.

Investigators have also recovered parts of the plane, he said. “There’s everything from cardboard boxes to women’s clothing and bed sheets,” Hawthorne said.

The largest piece from the Boeing 767 that police have recovered is 50 feet long, Hawthorne told the newspaper. 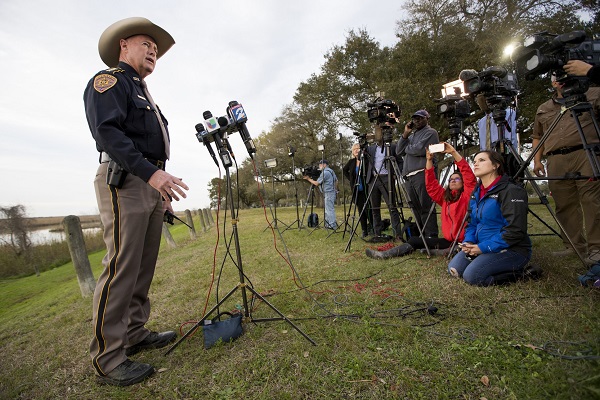 The sheriff said recovering pieces of the plane and its black box containing flight data records will be difficult in muddy marshland that extends to about 5 feet deep in the area. Air boats are needed to access the area.

The plane had departed from Miami and was likely only minutes away from landing at George Bush Intercontinental Airport in Houston.

The Federal Aviation Administration issued an alert after officials lost radar and radio contact with Atlas Air Flight 3591 when it was about 30 miles (48 kilometers) southeast of the airport, FAA spokesman Lynn Lunsford said.

Air traffic controllers in Houston tried at least twice to contact but the plane but received no response.

After losing contact, then they asked a United Airlines pilot if he had seen “ground contact” — wreckage — to his right or behind him, according to recordings of the conversation. “That’s a negative,” he said.

They also asked a Mesa Airlines pilot: “See if you can make ground contact. We are looking for a lost aircraft ... it’s a heavy Boeing 767,” meaning it’s a big, two-aisle plane.

“No ground contact from here,” the Mesa pilot said. 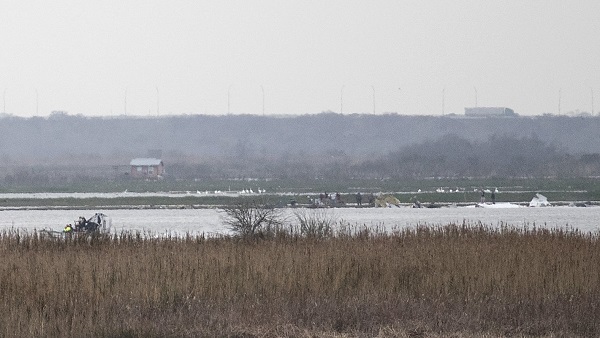 Emergency personnel work at the scene of a plane crash site in Trinity Bay in Anahuac, Texas on Saturday, Feb. 23, 2019.

The Coast Guard dispatched boats and at least one helicopter to assist in the search for survivors. A dive team with the Texas Department of Public Safety will be tasked with finding the black box, Hawthorne said.

Trinity Bay is just north of Galveston Bay and the Gulf of Mexico.

FAA investigators are traveling to the scene as are authorities with the National Transportation Safety Board, which will lead the investigation.