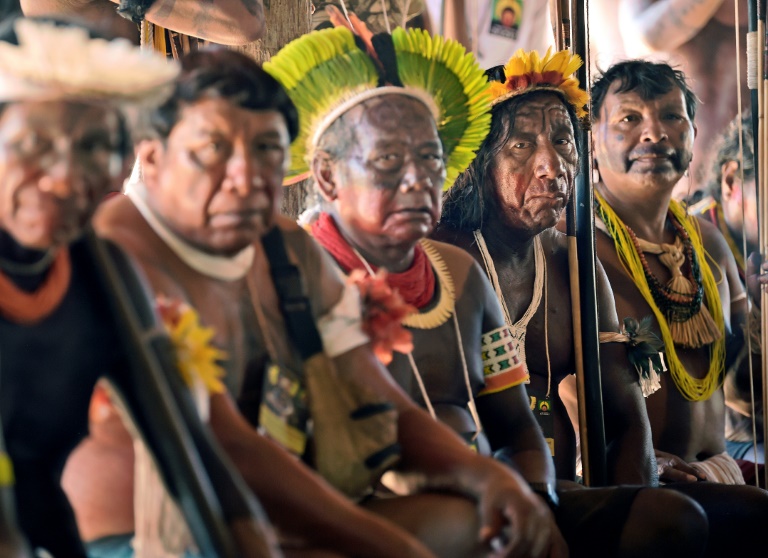 Dozens of Amazon indigenous leaders have gathered in the heart of the threatened rainforest to form an alliance against Brazilian President Jair Bolsonaro's environmental policy and his threats to throw their homelands open to mining concerns.

The main objective of the meeting is to present a united front against Bolsonaro's plans, which they say pose a threat to the Amazon and their way of life, as well as threaten open conflict over land rights.

"I don't want anyone to die in front of me. I don't want everyone to kill each other, the white people against the indigenous," Brazil's leading indigenous chief, Raoni Metuktire, told the meeting, which began on Tuesday.

"Bolsonaro says a lot of bad things about us. He doesn't attack only the indigenous, but he attacks us more than anyone," said the chief, his head adorned with an array of colorful feathers, his body smeared with black paint.

Wearing a labret -- the ceremonial disc worn by warriors -- in his lower lip, the 89-year old chief said he would personally travel to the capital Brasilia to present the meeting's conclusions to Congress.

"Over there, I'm going to ask Bolsonaro why he speaks so badly about the indigenous peoples," said Metuktire, leader of the Kayapo tribe.

He also highlighted the importance of "seeking political support" for the Amazon peoples in Europe.

Last August, Metuktire had a meeting with French President Emmanuel Macron on the sidelines of the G7 summit in Biarritz, amid a raging international controversy over the Amazon wildfires that environmentalists said were the result of Bolsonaro's policies.

The far-right president strongly criticized the indigenous leader during his speech to the UN General Assembly in New York the following month.

Bolsonaro, accused of favoring Brazil's powerful agribusiness sector with a policy of deforestation, warned that "Raoni's monopoly of the Amazon is over."

The meeting -- held deep in the rainforest in the village of Piaracu in Brazil's western Mato Grosso state -- echoes a previous effort to bring Amazon communities together to fight economic interests.

In 1986, environmentalist Chico Mendes formed the Alliance of Forest Peoples but was shot dead by a rancher two years later.

"More than 30 years ago, in a scenario very similar to this, a great alliance of the peoples of the jungle was being discussed. The political scenario is as worrying today as it was then," said Mendes' daughter Angela Mendes, who is among those attending the meeting.

Mendes, apart from being an environmentalist, was a rubber tapper, and non-indigenous extraction communities -- who live off rubber and fruit harvesting -- are also joining forces here with the indigenous tribes.

"We are living in a dramatic moment, almost a war situation," said Sonia Guajajara, coordinator of the Association of Indigenous People of Brazil (APIB).

In her native northeastern state of Maranhao, four indigenous people have been killed during a recent six-week period, she said.

"We do not accept trading our territories and our lives to resolve an economic crisis that we have not caused," said Guajajara, a vice-presidential candidate for the leftist PSOL party in last year's elections.

Deforestation of the Amazon has almost doubled since Bolsonaro came to power a year ago.

Preliminary data collected by the National Institute for Space Research (INPE) shows an 85 percent increase in deforested areas in 2019 compared to the previous year.

"Bolsonaro, why don't you respect us? Why do you want to finish the natives?" shouted Tuira, the local Kayapo leader, before launching into a high-pitched song in his language.

Approaching his 90th birthday, Chief Raoni Metuktire said he hopes that the next generation is ready to continue his fight.

After shuffling a few steps of a ceremonial dance, he said: "I am old, tired."