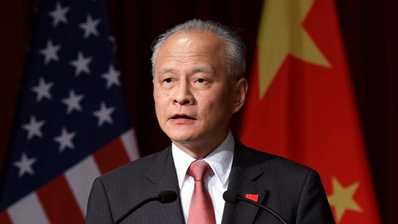 Chinese Ambassador to the United States Cui Tiankai's article "Ignoring the facts to blame China will only make things worse" was published on the Washington Post on Wednesday and criticized the absurd mindset of "always blame China" during the fight against COVID-19.

The ambassador wrote that since January, China has fought a tough battle against the novel coronavirus and spared no expense to save lives while under various groundless attacks.

"An unnecessary burden has been distracting our focus and undercutting international efforts to curb the virus: the absurd mindset of always blame China," he wrote.

"Simply put, for some people, China has to be wrong, regardless of the facts," he added.

The ambassador then listed allegations during different periods in China's fight against the virus, such as critics saying China's lockdown violated human rights, and claims labeling China's updates about the virus as disinformation and propaganda.

Cui pointed out that the nature of China's political system dominated the content of attacks, and the Communist Party is the ultimate target of their barrage.

"Is China really to blame?" Cui questioned and then presented a series of facts to refute those allegations.

"Behind the mindset of 'always blame China' is a kind of dirty politics, championed by a few people who shift the spotlight for political gain. In their manipulation, China has to be wrong," Cui stressed, adding that it is this blame-shifting that needs transparency.

"It is time to end the blame game," Cui reiterated.