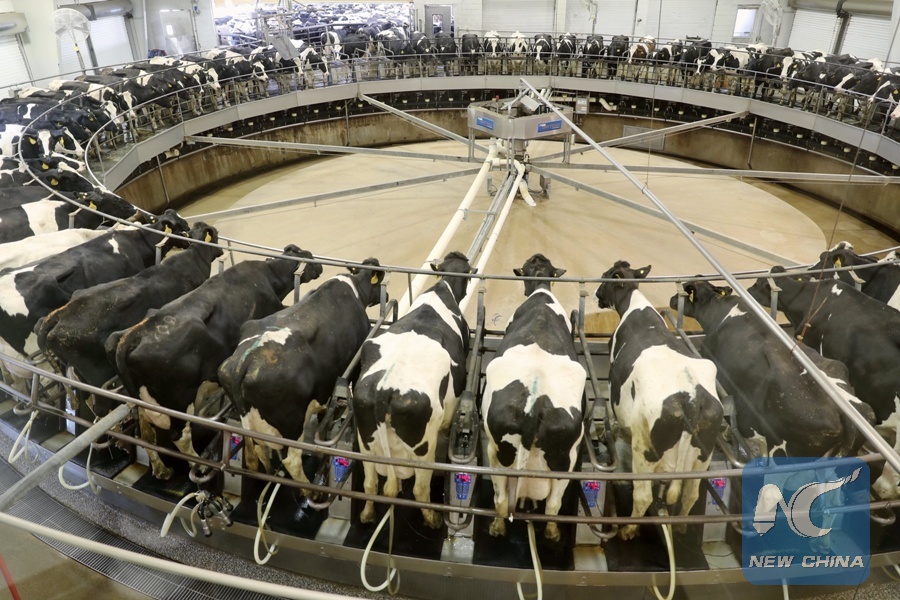 Photo taken on March 23, 2018 shows the automatic milking equipment and cows to be milked at Fair Oaks Farms in Fair Oaks, Indiana, the United States.(Photo: Xinhua)

American farmers, reeling from price drops and dissolving future markets, are hoping the 2018 Farm Bill will offer some relief from the US-China trade frictions.

"The US exports approximately half of all the wheat US farm businesses produce, and the potential loss of overseas markets resulting from responses to the (Trump) Administration's aggressive use of tariffs could have measurable adverse effects on wheat prices," national agriculture economist Vincent Smith told Xinhua Wednesday.

Across the board, agricultural commodities continued to struggle and fall, with soybean futures declining "overnight Wednesday as the trade spat between the US and China shows no signs of abating," Successfulfarming.com reported.

"Tariffs and stagnant global demand for commodities have left the agricultural economy in the worst shape we have seen since the farm crisis of the 1980s," American Farm Bureau Federation (AFBF) president Zippy DuVall said Monday.

"A wave of farm closures" could occur by next spring, "unless there's a major improvement in the marketplace," said National Association of Wheat Growers (NAWG) President Jimmie Musick.

"The administration's flip and rhetoric around the North American Free Trade Agreement (NAFTA) has made the United States appear to Canada and Mexico as an unreliable trading partner," he added, in a column published by CapitalPress.com last week.

On Monday, the two largest farming groups in the United States, AFBF and the National Farmers Union (NFU), along with more than 150 other organizations, sent a letter to Washington asking the Senate and House agriculture committees to pass the upcoming 2018 Farm Bill.

Why is this year's bill so important? In the face of complete volatility, the 2018 bill represents a symbol of sanity and stability for a field rocked and socked since the US-China tariff battle two months ago.

Industry insiders pray this year's legislation will offer needed consistency to a sector spiraling downward due to current US trade policy.

"The Farm Bill is important, but in some ways it's more symbolic -- that farmers and Congress can agree on policy," Washington policy analyst David B. Richardson said.

"Hopefully the White House will listen to everybody in America who oppose the radical, destructive trade path currently devised by the President," he said.

"Montana's farmers are not blaming China for the trade war, they're looking at the (Donald) Trump administration," Smith noted.

What American farmers fear most is losing billions of US dollars to countries not hampered by tariffs or involved in debilitating trade disputes.

Bekkerman and other leading agro-economists say dialogue and negotiations are already underway between the world's biggest suppliers and consumers -- without US involvement, participation, or profit.

"The Administration needs to stop alienating our top trading partners and restore certainty to the agricultural marketplace as soon as possible, said Musick, a wheat farmer from Sentinel, Oklahoma.

According to US Department of Agriculture statistics released this week, the United States has exported 15.3 million metric tons of wheat so far in 2018 -- down 26.7 percent from 2017.

"When the administration announced in March that it would impose sweeping tariffs on Chinese steel and aluminum imports, buyers were unable to accept the risk of escalating import prices and stopped making new purchases of US wheat," Musick said in an opinion piece published on the agriculture website CapitalPress.com last week.

Musick sees Japan, that currently imports half of its wheat from the United States -- as courting more reasonable, coherent, and stable suppliers and entertaining trade agreements with top US competitors Canada and Australia.

Japan, Mexico, and the Philippines are America's biggest wheat recipients, and exports to Japan are down 10.3 percent so far in 2018, recent agriculture department data shows.

"The Australians are licking their chops," said Smith, a visiting scholar at the American Enterprise Institute and a 30-year tenured economics professor at Montana State University.

It's US President Donald Trump's overall trade tactics -- that include tariff battles with China, Canada, and the European Union (EU), withdrawal from the Trans-Pacific Partnership (TPP), and threat to withdraw from NAFTA -- that is creating global dissention on trading with America, industry insiders told Xinhua.

"The President's goal, to create chaos and upheaval, and hope the cards fall in his favor, is a losing game that will pit the United States against the rest of the world," said Richardson.

"The Trump trade policy has no direction," said Smith, "It is doing much more harm than good, especially in the long run, and it will be damaging to our trade relations with other countries into the foreseeable future."